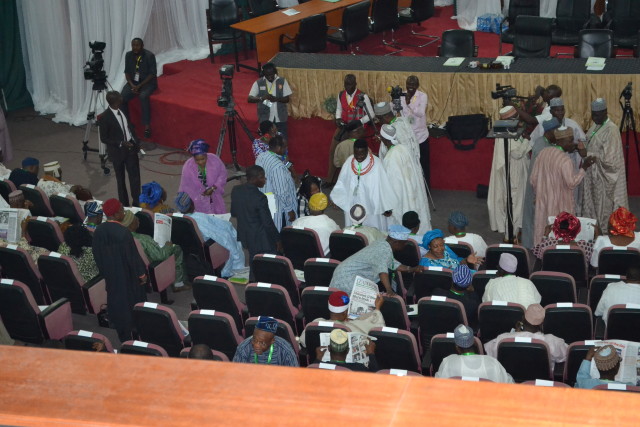 Protests and complaints greeted the recommendations of the Elders Committee of the National Conference on Derivation Funds, which presented its report to the Conference in plenary on Wednesday.

The Committee, which comprises leaders of the six zones and two other members as well as representatives of women, civil society, youth and labour movement, had recommended the increase of the derivation funds from 13 per cent to 18 per cent.

The Committee had volunteered to meet and intervene in the emotive issue of revenue formula to reach a consensus following intense debate on the issue, which divided the delegates along sectional lines.

While the southern delegates canvassed the raising of the derivation fund, virtually all the delegates from the north kicked against it.

“I have the honour to present to this plenary the outcome of the consultation that was held in view to find the way forward and promoting consensus on a very key issue that has capacity to divide this house and even may be this country.

“Mr. Chairman, there was a big relief and high expectations at plenary yesterday when General Ike Nwachukwu announced that a group of delegates have been working to broker agreement on the issue of derivation and related matters because we all know how emotional the matter is and it has to be handle carefully.

“The group started with the leaders of six geopolitical zones and was later expanded to include the representative of labour, employers association, women society and civil society for two nights and two days, the group has been engaged in promoting consensus on the way forward with regard to the issue of derivation and related matters.

“After the two days and two nights here is what we arrived at: we arrived at this conclusions and in doing that among us there have been shift of positions on the parts of the two positions already taken by our numbers in the spirit of compromise and putting Nigeria first and  above the interest of our respective zones and constituencies, recognising that status quo is not sustainable.

“We have always felt that any time we reduce our discussion to our village level, primordial level, state level, zonal level we are likely to run into problem, but when we raise the level to what unite us more than what divide us.

“Therefore, this group adopted a position and to recommend to the plenary not less than 18% as the derivation formula, but the group did not end there, as a package we propose two recommendations: one, for 5% revenue allocation to be made the solid mineral s development, we know we have over relying on oil and the time has come to pay attention to other resources throughout the country.

“The second and perhaps much more urgent is that we have recommended a new fund to be established which will call fund for stabilisation, rehabilitation and reconstruction, 5% of revenue allocation, principally for the North east, North west and the North Central.

“These recommendations if endorsed will be reflected in the revenue allocation Act. We have also recommended that what is happening now is not the problem of North east but that of Nigeria but more dramatically in the North east, we have also recommended broadly a safe guard and mechanism to ensure that monies goes to those who need them most and to also enhance production of mineral resources that our country is endowed with.

“Finally, in reaching this conclusion, this group is only motivated by one thing which is just to provide an avenue to reach consensus rather than voting, we do not believe that voting will really move us forward.”

Mr. Gambari, a former External Affairs Minister, had hardly concluded the presentation of the report when some delegates began to murmur and complain.

Noticing the mood of the session, the Deputy Chairman of the Conference, Bolaji Akinyemi, who was moderating, called for adjournment and asked Kate Okpaleke from Imo State to move the motion.

The motion was seconded by Iyabo Anisulowo, a delegate from Ogun State.

Mr. Akinyemi said the report of the Committee would be debated on Thursday.

Some of the delegates who spoke to the journalists said they will reject the recommendations while others lambasted Mr. Gambari for not reading out the exact contents of the report.

Sergeant Awuse, a delegate from the oil-rich South-South region, said the recommendation, notably the five per cent for rehabilitation of the Northern zones was not acceptable. He vowed that the recommendation would be defeated during voting.

A former military governor of Lagos State and delegate from the South-West, Raji Rasaki, said the report was badly presented by Mr. Gambari.

According to him, the former United Nations official, while reading the report veered off from what was originally agreed by the Committee.

Another South West delegate and clergyman, Tunde Bakare, argued that the implication of the recommendation for five per cent for the rehabilitation of the northern zones is that every part of the country is being encouraged to engage in insurgent activities.

Mr. Bakare regretted that both the South West and South East zones would not benefit from the arrangement.

A former Senate President, Adophus Wabara, said what the Committee recommends implied a particular zone or section of the country would be given five per cent in perpetuity because of insurgency and violence.

Mr. Wabara insisted that if the recommendation would be accepted, the fund should be applicable to all parts of the country.

“It is akin to making the money available to them in perpetuity,” he said.

The National Chairman of the All Progressives Grand Alliance, APGA, Victor Umeh, also kicked against the recommendation, saying it was discriminatory.

According to him, the five per cent  fund for the rehabilitation of the northern zones should be for all parts of the country. He said the South East is yet to receive any compensation since the civil war ended in 1970.

A member of the Committee, Mr. Falae, who believed the report was wrongly presented, said the South West zone would not accept the recommendations because they are irrational.

Mr. Falae, a delegate under the category of elder statesman, said steps would be taken immediately to sort out the matter.

Sola Ebiseni, a representative of the group of former Local Government Chairmen from Ondo State was heard declaring to some members of the Committee that the report would not be accepted, adding “this cannot be South West position.”

“We, the South-East delegates, reject the recommendation of five per cent of the national fund to any section. It is uncalled for. This is very deceitful,” Goddy Uwazurike, a South East delegate and President of Aka Ikenga, said.

A delegate from Taraba State, Isa Malfindi, while reacting, said his colleagues protesting the recommendations had a right to do so. He insisted that what Mr. Gambari read to the Conference were agreed upon just as he expressed optimism that the issue would be resolved on Thursday.

Mr. Nwachukwu, who initiated the consensus arrangement, spoke in the same vein, saying the delegates protesting the recommendations had a right to speak against them during debate on Thursday.

He explained that the Committee was sent on errand and had presented its report and it was left for the Conference accept or reject it.

Mr. Nwachukwu, however, said the issue would be resolved amicably.