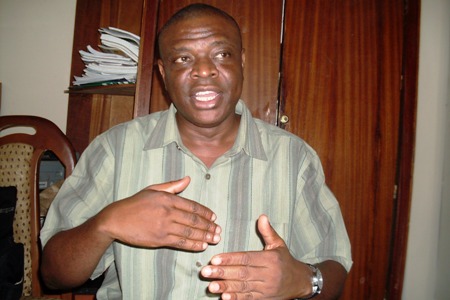 For better or for worse, whether we are conscious of it or not, the recently inaugurated National Conference is and has become a very hotly contested political process and institution, a theater of increasingly intense overt Class [Political] Struggle.

Why is this so? From its very beginning, social forces and social formations represented at the conference had begun to reach out, to announce the political demands of their platforms, to seek to build possible alliances, as well as to maneuver for domination of the conference.

Let us go through a series of hotly contested processes within the National conference to highlight the way and manner that this National Conference is fast becoming the main political arena of class struggle in the current period.

Each of the battles that have been waged have been won, lost or stalemated.  One of the very first battles was over the rules and procedures as a whole. Before the inauguration of the conference, a set of rules had been compiled, and printed out in booklet form, dated March 10th 2014. It did not read proposed draft rules; its title was very clearly put as the Rules of the National Conference. From this it was clear that a number of delegates were suspicious, and that it was possible to read into the printing & publication of the rules into booklets, a possible intent on the part of the government to present the published rules as a fait acompli; otherwise why was it not just typed out in A4 sheets, titled proposed draft rules, and presented to the delegates before being printed, published and dated? The first battle and victory was to get the rules to be subjected to the process of plenary deliberations and adoption.

Again there has been a very hot contestation on the authority and mandate of the conference; and there have been angry defense of the existing constitutional order as well as angry assertion of the supremacy of the NASS and existing status quo over the National conference. These assertions have also been as hotly and angrily disputed, with an emergent notion of the autonomy of the conference by a few but increasing number of delegates. In this view the processes of the ongoing National Conference, depending on the eventual balance of forces and power within the conference, propelled by altered balance of power and forces outside the conference could lead to the emergence of a new constitutional order, even possibly the inauguration of a new social transformation process.

This very debate and contestation is very closely related and linked to the contestation over where sovereignty lies, with the state and its institutions; or with citizens. This sovereignty debate is reflected in the position around the call for or against a referendum as the mode of validating the outcome of the conference.

Also related to the dispute and contest over the referendum is the contestation over whether the National Conference should be open to active participation of citizens through the submission of memos or not. Again forces in defense of the status quo came out opposed to participation of citizens through submission of memos. A Gain the forces of change on this matter won a clear victory with the overwhelming approval by conference to seek for memos from the public. The committees once constituted will continue to deliberate and receive memos simultaneously. Sections of the elite ruling class are scared and antagonistically opposed to any idea which they consider represent an opening for the intrusion of the masses into active political life in general, and active life of this very political national conference in particular.

We must add to these the contestation over press coverage. After long and again contested debates, conference expunged from the rules a clause which if retained would have meant effective gagging of the press. Furthermore a move to have some so-called executive sessions of conference plenary held behind closed doors and without media presence was also defeated.

And of course a major battle has crystalised around the basis for decision making in the conference; whether this should be on the basis of consensus or not is more or less now fully agreed. Conference delegates will try as much as possible to reach consensus on issues. But if the conference fails to reach consensus, as will happen with many fundamental issues, how is a binding decision to be reached? There are now two views being hotly contested, and over which the conference has stalemated during this week. These are whether decisions should be reached by a three-quarters majority as proposed in the rules; or by two-thirds as is being canvassed by a majority of delegates.

Although it is important and will be quite significant to aim for consensus on issues, but the very class character of interests forecloses the possibility of consensus in the class struggle every time or even many times.

A compromise of 70% maybe reached by the select committee now saddled with the responsibility of finding a way out of the impasse; and this may be agreed by the entire conference in plenary early next week.

Nevertheless, what is becoming clearer is that there is a broad range of interests within the conference across the political spectrum from the far right and ultra conservative forces, through the center to the far left. Furthermore these broad range of social forces are crystalising broadly into two emergent alliances engaged in a struggle over the present and future of Nigeria, and over the relationship between classes. One of the broad category is clearly engaged in a battle to conserve and preserve the status quo; while the other broad formation is engaged in a battle to transform, transcend and change, if not overcome the current status quo.

The very depth and intensity of this contestation by this emergent, fluid and dynamic broad alliances, which is at the moment not yet fully conscious of themselves; can be gauged by some of the unguarded utterances on the floor of the conference, the threats of walkouts, driven by panic and fear over the sudden and increasingly manifest realization that this conference is opening a Pandora box for the ruling elites; that it can go anywhere, and that it can lead to yet undetermined outcomes which will be very detrimental and unpalatable to the collective and factional interests of the thieving treasury looting ruling class.

It is in this sense that it is upto us to decide and determine whether this potential is worth activating and realizing through robust critical engagement with the content of the conference, with respect to the issues that will be hotly contested within the conference; or whether the focus should rather be a continued insistence that flies in the face of reality that this conference is a distraction, and therefore insist on continuing to engage with trivialities with respect to the form of the conference.

On our path we have made a conscious decision to with; this conference’s potential is worth exploring, worth activating, worth realizing; and through a robust but critical, inside-outside, and during-after engagement with the issues and content of the conference as a process.