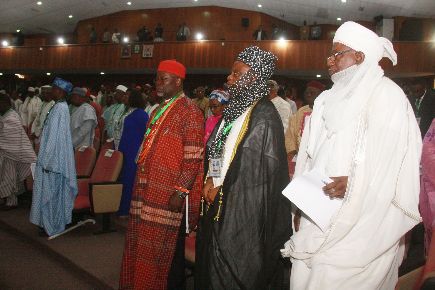 The delegates to the Nigeria National conference 2014 were on Monday given copies of the conference report and a new draft constitution seeking to replace the existing one.

The Confab went on break on July 14 to enable the secretariat produce the draft copy of the conference report. Then, the Chairman informed delegates that they would resume for plenary on Monday, August 4; but he sent a letter to the delegates on July 27 informing them of a one week extension to the break because the reports were not ready.

The letter titled, “Postponement of Resumption Date” read in full: “Distinguished delegates, when the management of the National Conference 2014 adjourned plenary session on Monday, July 14, 2014, delegates were informed that they will reconvene on Monday, August 4, 2014 to certify the draft report of the conference to be assembled by the secretariat.

”Substantial work has been done on the various sections of the report as at now and we were hopeful that the entire draft will be ready by the scheduled date.

”However, because of the two-day public holidays declared for Monday and Tuesday, July 28 and 29 respectively, and the volume of the report, which various sections have to be integrated and produced at the same time, it is becoming obvious that 500 copies of the draft report in the required volumes may not be ready for distribution to all the delegates on Monday, August 4, 2014. This is because external facilities needed to reproduce the volume required became unavailable beginning this weekend because of the long holiday.

”To avoid a situation where delegates return to Abuja without having the necessary materials to conclude the session within the time frame specified in the work plan, conference management decided to move the return date ahead by one week. Consequently, delegates are now required to return for certification of the Conference Report on Monday, August 11, 2014.”

However, both Mr. Kutigi and his Deputy, Bolaji Akinyemi, did not turn up at the conference hall, Monday. The secretary of the Conference, Gloria Azinge, who stood in for the chairman, informed delegates that there would be no plenary discussion as earlier scheduled.

She told them that the secretariat will distribute copies of the confab report, a draft of the constitutional amendments suggested by the confab, and a bill to introduce the amendments.

The secretary took time to explain the documents being given to the delegates.

She also said in order to make it easy for delegates, the secretariat extracted the third column, a fusion of the existing constitution and the amendments proposed by the delegates, which will serve as a draft constitution for consideration by the National Assembly.

Mrs. Azinge added that the secretariat had also produced a draft bill, which will introduce the amendments and alterations that will eventually lead to a fourth amendment to the constitution.

She said copies of the votes and proceedings of the last sitting of the confab were given to delegates to go through because it will be the first item to be considered during plenary on Wednesday.

The secretary also announced that copies of the confab Hansards from May to July were ready and will be given to delegates.

Shortly after Mrs. Azinge concluded her announcement, a delegate, Sani Zorro, representing the media informed the secretary that most of the delegates are not aware a new draft constitution was being planned by the confab secretariat.

He, therefore, asked that more time be given to delegates to go through the draft copies.

Mr. Zorro also inquired about the health status of the chairman and his deputy.

“In this era of Ebola, it is important that we know that that the Chairman and his Deputy are in good health, I say this because you did not mention the reason for their absence,” he said.

Dan Nwanyanwu of the Labour Party also agreed with the submission made by Mr. Zorro.

He said delegates need at least one week to go through the draft final report and other documents.

“The conference report is very voluminous and there is also a draft new constitution, I believe that two days is too short for us to read through and make sense of everything. May I therefore suggest that we reconvene on Monday next week to consider the reports,” he said.

Mrs. Azinge, however, informed delegates that she had no mandate to take a decision on the matter being proposed. She advised delegates to turn up on Wednesday as required by the confab leadership.