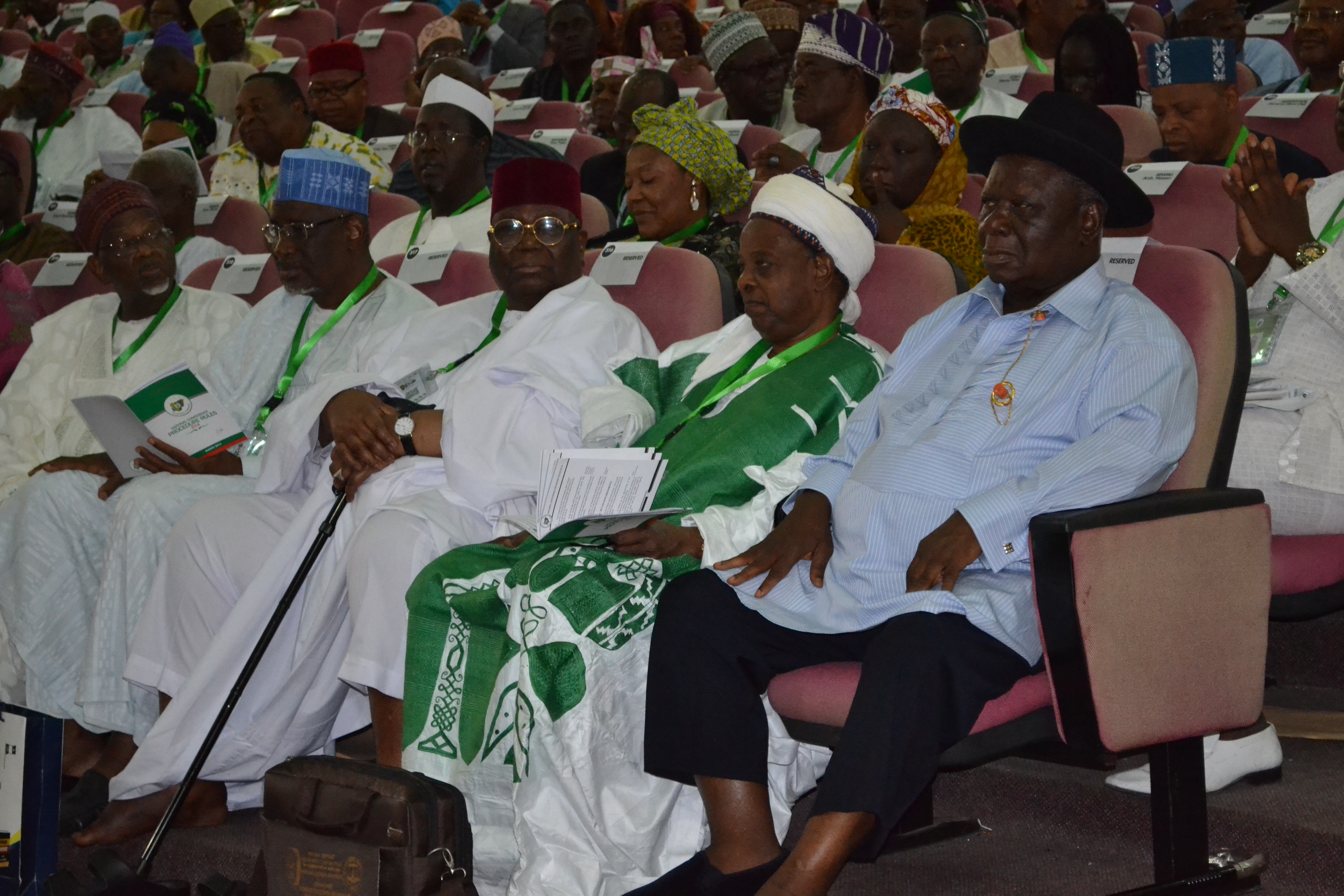 “Nigeria as it is today requires a new architecture”. – Ray Ekpu

As the debate on President Goodluck Jonathan’s speech entered its third day on Wednesday, focus started shifting from issues raised in the speech to matters central to the National Conference and what to make of them.

Opinions and counter-opinions flowed as delegates deliberated on issues of corruption, security, economic development or the lack of it, religion, and ethnic nationality with focus on the minority and majority question.

While some of the speakers suggested that corrupt officers, especially those in public service, should face death sentence, others agreed that economic development with the practical consequence of job creation will check the issue of insecurity nationwide.

Former Secretary to Government of the Federation, Chief Olu Falae said Nigeria’s problem started when the military, in 1966, murdered regional government which had served as a tonic for development of zones across the country.

He also stated that abolition of Parliamentary system of government where power was with the entire cabinet and replacement with Presidential system where powers lie with an individual had caused serious political crises in the country.

Femi Falana, SAN, in a moving contribution, said the Conference, though not sovereign, has provided Nigerians with a window of opportunity “to find out why we are poor in the midst of plenty while a microscopic minority of the population is rich and smiling to the bank.”

He said corruption has endangered the corporate existence of Nigeria, and advocated political justice, social justice and environmental justice.

On the issue of ethnic minority and majority, Chief Edwin Clark pleaded with delegates to give it priority during committee discussions so that at the end of the Conference, existing controversies arising from it would become a thing of the past.

He said the natural solution to the problem remains the realization that no tribe is greater than the other, “no one is a first class citizen, and no one is a second class citizen. Everyone is qualified to rule this country.”

It was his view that in the absence of tolerance, the dream of nationhood would be difficult to achieve; “if you are a southerner and the other person is a northerner, if you cannot live together, then there will be no Nigeria.”

Dalhatu Bashir from Jigawa State noted that at creation, Nigeria came with a promise and it was that promise that moved the country in the right direction.

For instance, he said the late Dr. Nnamdi Azikiwe, an Igbo man was born in Zungeru in northern Nigeria, grew up in Igboland but went ahead to win election in the heart of Yorubaland.

It was his view that if at the end, the outcome of the National Conference makes it possible for any Nigerian living anywhere in Nigeria to have equal rights of citizenship, then it would justify the reasons it was convened.

Describing the President’s speech as stimulating, comprehensive and forthright, Ibrahim Bunu said delegates should not fail to negotiate and should not negotiate out of fear since Nigeria belongs to everyone.

On security, Abubakar Chika Adamu from Niger State said, “Nigeria is at war with itself. Security remains our greatest challenge. We must stop playing politics with it. We here must do what we ought to do and leave the President to do what he has to do to solve this problem.

On corruption, he observed that Nigerians have moved from mere stealing to looting and have graduated from looting to mass looting. His suggestion was that a soft-landing should be created for those who stole public funds to return them without being prosecuted.

“We must be serious about fighting corruption,” said Magayi Dambatta; adding that for Nigeria to succeed in this, there was need to reorganize the anti-corruption agencies followed by diligent prosecution.

A representative of Nigerian youth, Ben Dontoye demanded legal backing to the adoption of capital punishment against corruption. He believed this would be the only way to drive fear into people who have taken to corrupt practices as a trade.

Former Inspector General of Police, Ibrahim Coomasie cited the absence of sincere leadership at different tiers of governance as one problem that Nigerians are worried about.

Retired General Muhammed Mansur Dan Ali informed the Conference that out of the 36 states of Nigeria, 33, if not more have soldiers deployed to the streets.

He said the National Conference should recommend complete restructuring of the Armed Forces of Nigeria and other security agencies for effective performance of their duties.

Senator Seidu Dansadau made one appeal in his comment: that Jonathan should ensure that the recommendations of the Conference are implemented and not allowed to go the way of other recommendations in the past.

He said it was time for delegates to strip themselves naked, “not just to say that we believe in the indivisibility of Nigeria but to practically demonstrate it.”

His position was supported by Professor Godini Dara who insisted that the lofty ideas and recommendations expected at the end of the Conference must be implemented to free Nigeria from the grips of economic apartheid.

On corruption, he said there was need to establish ethical standards; and on the economy, Dara strongly urged the President to free Nigeria from what he called the witchcraft of the World Bank while industrialization should take the front seat both in budgeting and planning.

Sale Dauda from Bauchi State attributed insurgency in every part of the country to the failure of states and local government who he said were totally dependent on what the federal government would do instead rising to their responsibilities of providing leadership and governance.

He said in some parts of the country, it has become difficult and even impossible to buy a piece of land for the purpose of building a church for worship and that those responsible for such prohibition were the elite.

Francis Doukpolagha from Bayelsa State told the Conference that the failure of the Nigerian State stemmed from the fact that democracy has become government of the people by the people but not for the people.

Ignatius Kevin Edet lamented what he called inequality and imbalance in the creation of local government areas in the country and urged the Conference to use the opportunity of the dialogue to correct the anomaly.

He suggested the application of capital punishment as a check against corrupt practices by public office holders, a position enormously canvassed for by other speakers.

Correct census as a basis for revenue sharing and infrastructural development was suggested by Charles Edosomwan, SAN, from Edo State who also emphasized that “we need to put power in the strata of government that is close to the people.”

Veteran journalist, Ray Ekpu, said the President’s speech constituted a new thesis for the reconstruction of Nigeria and that Nigeria as it is today requires a new architecture.

Ekpu noted that Jonathan seemed like someone who does not want “this house to fall,” still he said the house called Nigeria was too rickety and weather-beaten to be left on the wish list of a permanent structures.

Ekpu said for a country that has had 14 different administrations in 53 years, “that is cyclical stability. There is no way a country can grow in this manner.”

For Chief Chris Eluemunoh from Anambra State, “the Igbos have no other country than Nigeria; therefore the unity of this country is paramount to us. This unity must be anchored on equity and justice.”

Dr Osahon Enabulele of the Nigerian Medical Association proposed a massive national health policy that would cater for the health needs of the rural dwellers.

In addition, the NMA chief suggested that “a time has come for us to look at the mental and medical fitness of our political leaders,” as a way of ensuring that they are fit and proper to occupy public offices.

Dr Silas Eneyo from Rivers State likened Nigeria to a building with collapsed pillars and advised: “Let us not pretend to be painting a building whose pillars are collapsing.”

It was his view that the pillars of any federation lie in its justice and equity system and that the Conference has provided the delegates opportunity to rebuild the house with sound ideas and recommendations.

Gary Enwo Igariwe said Nigeria has been bleeding for sometime, has gone on its knees and though it wants to stand, it was actually going down. He urged delegates to identify reasons for conflicts and address them.

He cautioned against selective solution, “when you solve a problem in a particular area and ignore the ones in another area, you have not done anything; you are merely relocating the problem.”

He said most of the problems can be easily resolved through restructuring of the country; advising that delegates should leave their ethnic standards and discuss Nigeria.

Professor Eddy Erhagbe told the delegates that for Nigeria to move ahead, the bottom-line remains good governance because “corruption is not regional, it is not ethnic; corruption is an elite conspiracy.”