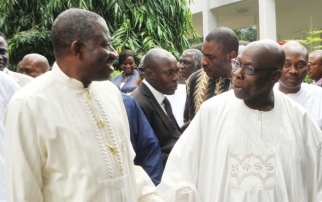 The National Conference being planned by the Goodluck Jonathan administration will have 94 delegates more than the number nominated into the defunct National Political Reform Conference, NPRC, convoked by former President Olusegun Obasanjo administration in 2005, and might cost Nigerian tax payers an extra N6 billion.

While 492 delegates would be nominated to the National Conference, which takes off in March, according to the Secretary to the Government of the Federation, SGF, Pius Anyim, about 398 delegates attended Obasanjo’s NPRC.

About N7 billion has been allocated for this year’s conference in the 2014 budget estimates currently before the National Assembly. The amount is about N6 billion more than the about N1 billion believed to have been spent on organizing and maintaining delegates to the defunct conference.

Mr. Obasanjo proposed N932 million for his conference, which lasted between February and July 2005, although it was not captured in that year’s budget. Some officials of the conference said a little more than the estimated amount was spent. PREMIUM TIMES is however unable to establish how much the administration eventually spent on the conference.

The former Secretary of the NPRC, Matthew Kukah, was quoted as saying last weekend that the N7 billon proposed for the NC “is just pocket money, it is chicken feed by Nigerian standard, considering how much money have been stolen from this country.”

Mr. Kukah noted that “even if they are going to commit N10 billion for the people to stay in hotels in Nigeria, the money is not the issue, building a nation is a serious matter.”

Mr. Anyim had, late January, released the modalities and guidelines of the proposed National Conference at a press conference in Abuja. He said the conference would commence in March and last an initial three months.

He said where consensus was not achievable on any issue; it would be passed if 75 per cent majority approved it.

The SGF also said the NC would advise the government on legal framework, procedures and options for integrating its decisions and outcomes into the 1999 Constitution and other laws of the country.

A breakdown of the composition of the proposed National Conference, drawn from 18 clusters of groups announced by Mr. Anyim, is as follows:

Two nominees, namely Anthony Enahoro, a First Republic politician and Nobel Laureate, Wole Soyinka, who were nominated in the elder statesmen category, declined to participate in the conference.

Comparing the modes of nomination into the two conferences, a noticeable departure from the previous one is the inclusion of bodies like former political office holders (Ex-governors, former Senators Forum/Former Representatives Forum/Association of former Speakers), which will send 24 conferees.

Also for the first time, the Jonathan administration is allowing the Judiciary six slots (which the president will personally nominate) while the National Academies (Academy of Science, Engineering, Education, Letters and Sciences) are also enjoying recognition for the first time . Collectively, they will nominate five delegates to the conference. During the Obasanjo conference, academics (University/Polytechnic lecturers/Vice Chancellors) were represented by six delegates drawn from each of the geo-political zones.

ALGON, an association for local government chairmen, is getting an opportunity to attend a national conference for the first time and it will be sending six of its former members, with each drawn from the six geo-political zones. The Nigerian Association of Women Journalists, NAWOJ, and Women in Management and Business, WINBIZ, all categorized under Women Groups, are also coming for the first time.

The number of delegates representing Nigerians in Diaspora has been increased with the inclusion of representatives from the Middle East while the Nigerian Economic Summit Group, NESG, has been listed to send delegates under the Organised Private Sector category.

However, unlike the Obasanjo regime, the Jonathan administration is shunning retired diplomats. This year, no slot is reserved for the retired diplomats who were represented in the 2005 Conference by two delegates, Umar Yola from Kano and Dapo Fafowora from Osun State.

An analysis of the allocation of slots showed that the Jonathan administration is more generous in allocation than Obasanjo’s.

The slots for Socio-political organisations increased from 11 in the previous conference to 18 in the coming confab; Women Groups 6 to 12; Traditional Rulers 6 to 13; Retired military, police and security personnel 7 to 18; Retired Civil Servants 2 to 6; Labour Representatives (NLC and TUC) 14 to 24; Nigeria Youths Organisation 6 to 18; Civil Society Organisations 6 to 24; Nigerians in Diaspora 5 to 8; Journalists bodies 4 to 8; Physically challenged Nigerians 3 to 6.

However while allocation to the faith-based organizations remains at 12 (Christians 6 and Moslems 6) and elder statesmen (37), the number allocated to political parties reduced from 18 to 10. Interestingly, only three parties, Peoples Democratic Party (PDP), All Nigerian Peoples Party (ANPP), and Alliance for Democracy (AD), which were the only parties in the National Assembly then, were represented at the Obasanjo conference. This time the parties represented in the National Assembly are PDP, All Progressives Congress (APC), All Progressives Grand Alliance (APGA), Accord Party (AP), and Labour Party (LP), and they shall each send two delegates to the March conference.

Another interesting development is that the number of delegates the state governors will nominate has reduced drastically. While Mr. Obasanjo asked the 36 state governors to nominate six delegates each to the NPRC in 2005, Mr. Jonathan is asking them to send three delegates each based on Senatorial Districts in their various states.  Also, in 2005, the Federal Capital Territory (FCT) nominated two representatives, but it will bring only one delegate to the Jonathan’s NC.

Even so, the delegates nomination exercise has continued to attract criticisms. For instance, the NBA, categorised under professional bodies, has rejected the allocation of only one slot to the association.

In the main, it is still unclear how many delegates altogether will be nominated by Mr. Jonathan and the Federal Government although it is certain that the president will nominate representatives of the Judiciary, retired military, police and state security officers, traditional rulers, retired civil servants and others. Besides, as indicated by Mr. Anyim, the Federal Government will nominate 20 delegates of which at least six will be women. At the end of the day, the president might end up nominating close to 150 delegates from the different categories.

This has already drawn criticism from the Yoruba socio-cultural group, Afenifere, which said nominating too many delegates could give the president excessive control over the conference.

The Trade Union Congress, TUC, has condemned this arrangement and is hoping the Jonathan administration will jettison it.

In composing the NPRC, the Federal Government under Mr. Obasanjo, nominated many delegates, including some it labelled special representatives, who apparently were its eyes at the conference. They were Kanu Agabi (Special Adviser to the President on Ethics and Good Governance), Jerry Gana (then Information Minister), Fola Adeola, and Iro Dan Musa.

Another area where Jonathan’s NC is different from Obasanjo’s NPRC is in the area of planning. Following his promise in the 2013 Independence Day nationwide broadcast to the nation to convoke a national dialogue, Mr. Jonathan appointed a 13-member Presidential Advisory Committee on National Dialogue headed by former Senator Femi Okurounmu, a former Senator, to package the conference. Interestingly, Mr. Okurounmu was a member of the defunct NPRC as the sole representative of Afenifere.

The panel was tasked to advise government on the framework of a national dialogue by consulting widely with Nigerians. It was also asked to come up with an appropriate name/nomenclature for the proposed national dialogue.

Consequently, the committee toured the nation during which it collated the views of Nigerians on the conference and submitted its report to Mr. Jonathan in December.

In its 82-page report, the Markarfi Committee recommended that representation at the conference, which it suggested should be called “National Body,” should reflect the various social forces, community interests and political tendencies within the nation in order to ensure public ownership of the envisaged reform process.

On the size of the confab, the committee recommended either 351 or 230 delegates.

Then the Federal Government set up a planning committee headed by the then SGF, Ufot Ekaette. Among the members of the committee which met for the first time on February 14, 2005 were Bala Ka’oje, the Special Assistant to the President on National Assembly; Lawrence Alobi (Commissioner of Police, Operations FCT Police Command); R.U Audu (Permanent Secretary, OSGF), A. Nasidi (Federal Ministry of Health), E. Afuba (International Conference Centre), M.J. Ibrahim (FCDA) and Peter Anegbeh (Foreign Affairs).

While inaugurating the NPRC on February 21, 2005 at the International Conference Centre, Abuja, Mr. Obasanjo, in his 24-page address, declared that the Federal Government had no hidden agenda for convoking the NPRC. He said the conference would not assume sovereign status because sovereignty of any nation belonged to the people.

He added, “The NPRC is NOT designed to dismember or disintegrate the country. It is not established to encourage mudslinging; not to organize protest or subterranean political activities that would be detrimental to effective discussion.

Mr. Ekaette, on his part said from inception, the Obasanjo administration spared no effort in adopting measures designed to consolidate and deepen the gains of democracy and promote sustainable development in the country.”

Settling down to work

At inauguration, some vital documents were distributed to delegates to facilitate their work. The documents include – the 1999, 1960, 1963 Constitutions, Report of the Presidential Committee on the Review of the 1999 Constitution, a proposal for Draft Electoral Bill 2004 by INEC, Report of the Markarfi Committee, Meeting Everyone’s NEEDS, Address by President Obasanjo at the opening of the conference, Report of the Oputa Panel, Vision 2010 document and Cookey Commission Report.

The Conference soon set up a 47-member business Committee headed by Abdullahi Ibrahim, SAN. Membership includes Emeka Anyaoku, as deputy chairman, Kukah as Secretary. The Conference subsequently set up a total of 19 Committees to facilitate its work. They made recommendations, all of which were adopted except those relating to the contentious issues, which were later referred to the Committee of Leaders of State Delegates for further consideration. Only one committee, namely Committee on Environment and Natural Resources Reform, had a minority report from one of its member, Oronto Douglas.

Midway, the conference became enmeshed in crisis over the appearance of a “mysterious” draft constitution. The document, which recommended a-six year tenure for the president and governor, was allegedly smuggled into the conference. The Conference Secretariat denied sighting the document. On its part, the Federal Government said it was not a mysterious document as it was one of the working document submitted to the conference at inauguration.

Some issues emerged contentious at the conference include rotational presidency, derivation principle/resource control/fiscal federalism, devolution of powers, ban on former military head of government/military administrators from politics, use of electronic voting machine for elections, immunity clause for president, governors and their deputies, state creation (especially for the South East), tenure of the office of the president and governors.

The Obasanjo conference disintegrated after the South-South delegates staged a walkout on June 14, 2005 over the contentious derivation principle and stayed away from further proceedings. The delegates from the oil-rich zone demanded an irreducible minimum of 50% derivation, but accepted in the interim 25% derivation with graduated increase to attain the 50% over a period of five years. But the northern delegates were opposed to it thereby splitting the conference into two opposing camps.

Not even a meeting Mr. Obasanjo held separately with the opposing groups could assuage their feelings. As a result of the demand, the conference ended without reaching a consensus on derivation funds, resource control and tenure of office for president and governors.

Main characters at the NPRC

Those who became ministers are Yakubu Lame, Humphrey Abbah and Kabiru Turaki.