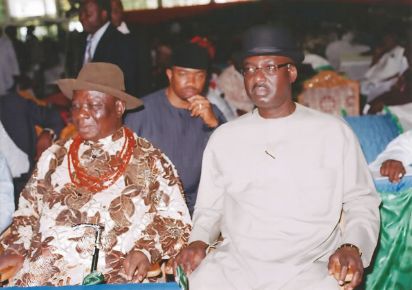 It takes courage to accept the obvious when it is convenient to follow the status quo.

It even takes more courage to put the obvious in motion when we can hide in the convenience of accepted norms: Therefore I commend the President for accepting and implementing the self evident truth that Nigeria is in need of a restructure. He could easily have hidden in the phrase of Nigeria being the giant of Africa, without allowing discussions on the physical and mental state of this giant, and why she has been unable to attain anywhere near her true potentials. He could, like some before him, have lived in denial and passed the buck to the next generation.

To all who are gathered here and those playing varying supporting roles outside this chambers – history beckons. We have been empanelled by divine instrumentality to change our country for the better and secure the future of our children, and to restore pride and dignity to the black race – Nigerians being 1 out of every 4 black persons on this planet.

A journey that began 54 years ago with other travelers like Indonesia, Malaysia, Singapore should have arrived at somewhere near destination by now.

Surely we must have the humility to pause, ponder and ask ourselves where we missed the road to El-Dorado, and perhaps retrace our steps. We cannot keep moving in the name of “moving forward” forever.

Since amalgamation in 1914 we have been through about 7 Constitutions (from Clifford’s, Richardson’s and Lyttleton’s to 1960, 1963, 1979 and 1999) in our search for true nation-hood, inclusive and just economic and social development, but we haven’t made much progress. Instead our economy is near comatose, youth unemployment and criminality are rife, there is general disenchantment by nearly all segments and tribes with the system. A mad scramble for dwindling resources and economic opportunities has opened and exacerbated old fault lines that were forgotten in the days of economic plenty (surplus). Now everybody is accusing the other of one sin or the other, and tempers are flaring, hence this timely convocation of a national dialogue.

From the debate so far and empirical analysis, it is generally accepted that the current structure is faulty and would take us nowhere and there is need for a re-jigging by turning the hand of the clock back to when regions had reasonable autonomy, and the centre wasn’t burdened with so many roles that have compelled inefficiency and corruption, for as the saying goes: “Power corrupts and absolute power corrupts absolutely”. In this regard the 1963 constitution is mentioned as a possible road map and I share this position. We need to revert to true fiscal federalism based on regional governments and not states that have no means of production and can hardly pay salaries , and are easily pocketed by their chief executives.Federations like America, Australia, India have devolved powers to their various states or regions and they are making appreciable economic and social progress.

In this current quagmire that we find ourselves no body is a winner. No tribe, state or zone is a winner – we are all losers. As the vast majority of our people over 80% are now living in destitution and face constant criminality and a near Hobesian state of nature where life is nasty, brutish and short, – be they Hausa/Fulani, Ijaw, Ekpeye, Yoruba, Igbo. The supposed “winners” are a tiny minority who have held us down and humbled the giant of Africa for personal gains – but they are now unable to enjoy their ill-gotten wealth here, because of the harsh and unsafe environment they have created for everybody including themselves. They must now stash their ill gotten riches away in the white man’s land, and only go there as visitors. Their wealth creates more jobs for a people who are near fully employed, whilst leaving our teeming youths in poverty and unemployment.

I wish to conclude by saying that the current scenario leaves us with few choices and we must seize the moment and restructure our country. To borrow from the words of Martin Lurther King: “there is the fierce urgency of now and we are now faced with the fact my friends, that tomorrow is today. We are confronted with the fierce urgency of now. In this unfolding conundrum of life and history, there is such a thing as being too late.Procrastination is still the thief of time. Over the bleached bones and jumbled residues of numerous civilisations are written the pathetic words – ‘too late’. There is an invisible book of life that faithfully records our vigilance or our neglect”.

We must therefore act in one accord, whether we are North, South, East or West, for our collective good and to guarantee the future of our country and our children.

Some say we only need to have good men who will govern transparently and fight corruption, but we have been waiting for nearly 54 years and how much longer shall we wait for these “few good men”. We should rather invest our energies in building structures that will ensure good governance irrespective of who is at the helm of affairs.
I thank you all and God bless Nigeria.