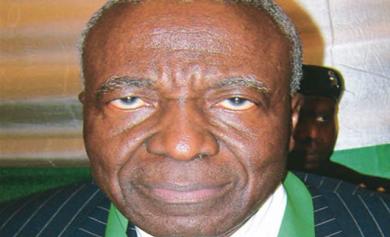 Mr. President, when you inaugurated the 2014 National Conference on 17 March, 2014, we knew that we were taking on a tough assignment. If truth be told, most Nigerians did not believe that this whole enterprise was going to last this long or come to a successful conclusion.

2. Yet, Mr. President, here we are five months later at a ceremony to mark the successful execution of our mandate.

3. It is not that we lasted this long that is newsworthy; but that we overcame all the obstacles in our way.

5. Mr. President, we did not try to ignore or bury our differences. We addressed these differences while respecting the dignity of those holding these differences and sought to construct solutions which would become building blocks for a just and stable nation.

6. Mr. President, we approved over 600 resolutions; some dealing with issues of law, issues of policy and issues of constitutional amendments. These resolutions did not deal with frivolous or inconsequential issues. We showed courage in tackling substantial and fundamental issues.

7. Mr. President, time will not permit me to list all the critical and fundamental resolutions adopted. But let me emphasize this: all our resolutions were adopted by consensus. Not once did we have to vote or come to a division. This is a message that we wish the world to hear loud and clear. Nigerians are capable of not only discussing their differences but are also capable to coming up with solutions to these difficulties.

8. Mr. President, the magnitude of what we have done is reflected in our Report and Annexures of 22 volumes of approximately 10,335 (ten thousand, three hundred and thirty-five) pages. Mr. President, the official Report of the 2014 National Conference was also adopted unanimously.

9. In the post-independence history of Nigeria, there have been four Conferences, including this 2014 National Conference. However, Mr. President, our own task has been the most arduous. The following statistics graphically illustrates this. The 1978 Constituent Assembly had a membership of 230 people and met for 9 months. The 1995 National Constitutional Conference had a membership of 371 people and met for twelve (12) months. The 2005 National Political Reform Conference was made up of 400 delegates and met for 5 months. We are 494 in membership and you made us do all this work in 4½ months.

11. Let me state here categorically and with the fear of Almighty Allah in my heart, that not once did you interfere or dictate to us in the course of this Conference. The only time we tried to consult the President during the conflict over voting percentages at the very beginning of the Conference we were told that the issue was for us to resolve. At no time after that did you meet with us or speak to us.

12. I also wish to thank my fellow members of the Conference Management and Conference delegates for the vibrant, even if at times turbulent, cooperation in ensuring a successful Conference.

13. I thank especially the former and present Administrator of the National Judicial Institute and their staff for their contribution to the success of this 2014 National Conference. Mr. President, let it be on record that all these facilities were turned over to us with less than 12hrs notice.

14. I thank all of you who have responded positively by accepting our invitation to attend this closing ceremony. Your presence has added gravitas to this ceremony.

16. Mr. President, please permit me to pay tribute to four of our delegates who died during the pendency of the Conference. Barrister Hamma Misau who died on March 27; Dr. Mohammad Jumare who died on May 5; Professor Dora Akunyili, on June 7; and Professor Mohammad Nur Alkali, on August 1, 2014. May their souls rest in peace.

17. Finally, Mr. President, let me on behalf of all of us thank the Secretary to Government, Senator Anyim Pius Anyim, GCON, who went beyond the call of duty in virtually turning over all the facilities of Government to assist this Conference.