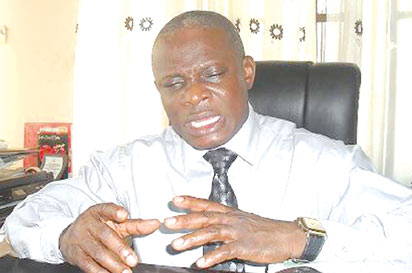 A legal practitioner, Barr Uwemedimo Nwoko in this interview hosted by Chioma Onuegbu speaks on the ongoing National Confab and why Jonathan should re-contest in 2015 among other issues. Excerpts:

How do you see the ongoing National Conference and the recommendations so far?

I feel disappointed in the National Conference because the only agenda that should have been discussed was removed and that is whether Nigeria should remain as one or not. That is the only thing. All the other problems of Nigeria are reduced into that. Are we still ready to continue to live together as one nation or not, that is the only question.

Are you in essence saying that what is going on in the conference is a jamboree?

Every other thing we are discussing is chasing shadows. Nigeria will still go for another national conference after this because we have failed to discuss the issue that we should have discussed, maybe the President did not have the courage to place it on the table that Nigerians should come together and answer the question.

It will not produce anything because we have not discussed the essence of the unity of Nigeria whether we are still ready to live together. Look at Boko Haram, are they the kind of people you say we should live together as brothers? What do we do to resemble each other? Their attitude towards religion, the constitution of Nigeria provides that Nigeria shall be a secular state, there shall be no state religion, there shall be no imposition of religion on any part of the country but are they observing it?

They observe it in breach in the north. Somebody started it in Zamfara State and they overlooked and said he wanted to bring Islamic law and started enforcing it and nobody called him to order and said listen, this is a secular state, anybody, anywhere is free to live in any part of Nigeria and practice his own religion freely. We kept quiet and now Boko Haram has arisen and they want everywhere in Nigeria to be Islamised.

Do you think Mr. President has done enough to tackle the insurgency and other security challenges facing the country today?

Yes of course he is doing the very best he can given the bad situation he is facing. The President inherited a completely dysfunctional state in terms of security, in terms of economy, in terms of everything you can look at. This President was not there when people started violating Nigerian constitution without question being asked at the central level.