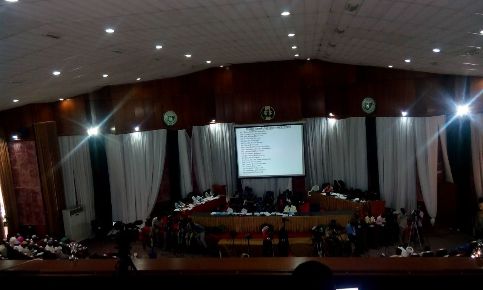 Since the conference started, three delegates have died while some others have fainted during plenary sittings.

There was panic at the National Judicial Institute, NJI, venue of the ongoing National Conference, when a delegate from Oyo State and Senior Advocate of Nigeria, SAN, Niyi Akintola, suffered a cardiac arrest.

The incident occurred while Mr. Akintola, was inside the gallery listening to the debate on the report of the Committee on Political Restructuring and Forms of Government, which was earlier presented by Ike Nwachukwu.

The attention of delegates was drawn to the ailing delegate when two nurses and security operatives rushed into the chamber to assist Mr. Akintola move outside the plenary.

Mr. Akintola could not be taken out of the NJI premises with the Police ambulance attached to the Conference due to the blockage of the route by cars belonging to delegates, who were struggling to also leave the premises.

Concerned delegates and the Secretary of the Conference, Janatte Valerie-Azinge, stood by to ensure the ailing delegate was evacuated to a medical facility for urgent attention.

When it became obvious that the ambulance could not get to where Mr. Akintola was waiting, a delegate offered his car and the ailing delegate was driven out of the premises with speed.

It was, however, not possible to ascertain the medical facility where Mr. Akintola was taken as at the time of this report even as the conference secretary said the delegate suffered from a cardiac arrest.

Over three months into the Conference, three delegates have died while some others have fainted during plenary sittings.