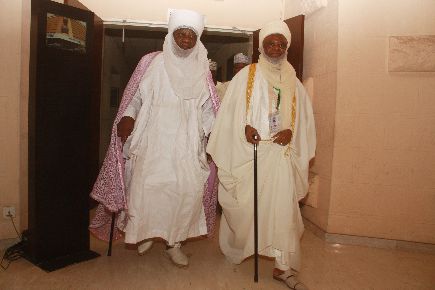 Northern leaders, under the Arewa Consultative Forum, ACF, have rejected any plans to alter the current structure and form of the Nigerian government.

The forum,said there is nothing wrong with Nigeria’s current structure and form of government.

“It is therefore the considered view of ACF that there is nothing wrong with the current federal structure with states as the federating units,” it stated. “All that is required is purposeful leadership that is humane in spirit, moral in purpose and wise in uses.”

With only 10 months to the general elections, the ACF, however, called for a system where an incumbent president or governor is barred from supervising an election in which he is a candidate.

While the group supported multiple terms for the two offices and their deputies because it makes allowance for motivation and reward, it advocated for multiple tenures that are not consecutive as practiced in Chile or in the alternative the creation of caretaker system as practiced in Bangladesh.

The Forum made the demand in a memorandum it presented to the ongoing National Conference.

ACF, which was founded in March 2000, is socio-cultural organisation of leaders in the 19 states of the North.

The chairman of the ACF, Ibrahim Coomassie, is a delegate to the Conference.

Mr. Coomassie, a former Inspector General of Police, co-chairs the Committee on Devolution of Powers, whose members have disagreed on virtually all issues, including resource control, derivation principle, state police etc.

The Forum in the 11-page memorandum sub-divided into 20 headings and signed by Mr. Coomassie, said, “ACF prefers multiple tenures for President/Governors because such system makes allowance for motivation and reward. But in the case of single term, the good and feckless are grouped together.

“As a result, the only incentive for leaders is ability to pillage public funds at collective peril. However, if the search is for a way of eliminating abuse of incumbency, it may be more productive to consider the practice in Chile which allows for multiple tenures that are not consecutive. That is to say, no President is allowed to conduct an election in which he is a candidate.

“Another alternative is to use the Bangladesh practice which uses Care-Taker Government to conduct the elections.”

The Forum also called for the sustenance of the current presidential system of government as opposed to the parliamentary system. It, however, suggested that the size of the governments should be trimmed for effective performance.

It stated further, “Towards this end, some ministries should be merged while appointments of minister to represent geographical zones should be abolished. More so that such practice conveys the wrong headed impression that zones are also federating units.”

Noting the presidential system had worked successfully in America, the ACF said the apparent failure of leadership in Nigeria may have nothing to do with the system of government, but with the operators.

It stated that what the country needs is a purposeful leadership needed for rewiring of the politics and reengineering of our sense of justice.

The Forum said since a political economy makes the governments in Nigeria to determine who gets what, why, where, how and when, it may be difficult to do away with politics of identity called power shift, rotation and zoning.

It therefore suggested that the issue of zoning, whether the presidential or gubernatorial power, should not be a constitutional matter, but should be left for political parties to manage.

The northern organisation warned against the recognition of the six geo-political zones, saying it “would amount to four tiers of government with dire consequences on the cost of government and unity of the country.”

It also argued that six geo-political zones as federating units with their own states, police and local governments would have centrifugal effects on the centre thereby making the nation a Confederation which could lead to the split of the country.

“Any devolution of power can still be achieved with appropriate adjustment in the exclusive list,” it said

On state creation, which is one of the cardinal demands of the South East geo-political zone in other to have equal number of states with the other zones except the North West, the ACF said creating more states in the country may be counter-productive.

It argued that while it is not in doubt of the contributions the creation of states had done to Nigerian project, too many states tend to convert into mere cost or effort centres at the expense of socio-economic development.

The Forum added, “The argument that creation of states should be on the basis of equality irrespective of population and land mass is inconsistent with elementary concept of justice, since injustice is not only when equals are treated unequally but also when unequal(s) are treated equally.”

On Fiscal federalism, ACF, which said it was not aware of any federal system that could reasonably be described as true federalism, said it was never opposed to the principle of derivation provided the aim was to compensate for the environmental degradation resulting from any exploration, or to reward efforts, however defined.

It noted, “The disagreement has arisen from the abolition of the onshore/offshore dichotomy. As a result, proceeds from the offshore activities that are not due to efforts of the states or any host communities, nor cause any degradation or environment, are factored into calculation for derivation with dire consequence to the economic well being of non-oil producing states.”

The Forum, therefore, called for the review of the current situation to allow for the proceeds from off shore activities to be shared to all the 36 states.

On the nation’s current security challenge, the northern group said the situation was not beyond redemption, especially if Nigerians come together and live up their synergy against common challenges.

In so doing, it stressed, “We must avoid generalisation and stick to what we know. This is because generalization tends to encourage criminals to hide under groups and perpetrate criminal activities.”

The group said that it regrets that in Nigeria, terrorism and other criminal activities “are regarded as regional or on account of faith and ethnicity. This is unhelpful therefore generalization is counterproductive and so must stop”.

The ACF said it never canvassed for the National Conference, but merely agreed that any national dialogue aimed at improving the unity, stability and harmony of the country would be welcomed.