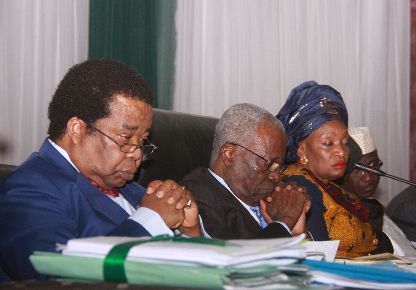 The National Conference concluded plenary sitting on Monday, but failed to resolve the disagreement over derivation formula after about five hours of meeting between the leadership of the Conference and the 50 “wise men,” the chairmen and deputy chairmen of the 20 Standing Committees.It voted to recommend that the Federal Government should set up a technical committee to advise it (government) on the issue.The Conference Chairman, Idris Kutigi, announced the resolutions of the wise men when they returned to the chamber.He also said the Conference would reconvene in plenary on August 4 to consider and approve its report to be submitted to the Federal Government.The decision is almost similar to that of the 2005 National Political Reform Conference, NPRC, which recommended the increase of derivation fund from 13 per cent to 17 per cent “pending the report of an Expert Commission to be appointed by the Federal Government.”Mr. Kutigi had at about 10.25 a.m. announced that the ‘wise men’ – leaders of various interest groups at the confab – and the committee leaders could not meet with him last Friday as scheduled just as he requested that they should be given about two hours to meet and report back to the conference.After over four hours of the meeting, the leaders, chairman and deputies returned to the chamber at about 2.20 p.m. while the confab leadership came in at about 2.35 p.m.About seven minutes later, the Deputy Chairmen summoned four of them – Mohammed Kumaila (Borno), Ike Nwachukwu (Abia), Olu Falae (Ondo), and Iyorchia Ayu (Benue) to see him. Consequently, they all withdrew from the chamber through the back door and returned five minutes later.Reading the resolutions, thereafter, Mr. Kutigi said: “Having critically examined the issue in contention, Conference recognises theneed to (a) review the percentage of revenue allocation to states producing oil and other resources (b) reconstruct and rehabilitateareas affected by problems of insurgence and internal conflict (c) diversify the Nigerian economy by first tracking the development of the solid minerals sector.“The Conference also noted that assigning percentage for the increased in derivation principle and setting up special intervention funds to address issues of reconstruction and rehabilitation of areas affected by insurgency and internal conflict as well as solid minerals development require some technical details and consideration.“The Conference therefore recommends that government should set up a technical committee to determine the appropriate percentage on the three issues and advise government appropriately.”While some of the delegates shouted in disapproval of the resolutions with shout of no! no! no others applauded it by clapping.“It is a very cheap decision. How can you abdicate your responsibility,” a delegate was heard shouting.Despite the rowdiness, Mr. Kutigi put the resolutions to votes and those in support out-voted those opposed.Mr. Akinyemi also announced that with what the chairman had read, pages 1 and 2 on list of amendments to the report of the Committee on Devolution of Power would now be irrelevant.However, a delegate from Bayelsa State, Francis Doukpola, invoked Order 9 (9) of the Conference rule and reminded it that on July 3, it took a decision to adopt fiscal federalism and that the decision was to enable the states control their resources and pay tax to the government.“The issue of 13 per cent does not arise anymore. What the Conference should do is to fix the tax to be paid to the Federal Government,” he said.Mr. Doukpola’s point of order was ignored by Mr. Kutigi, who announced to the delegates that the adoption of the resolutions effectively ended the debate on the report of the Committee.Amid shouts by delegates, the chairman called for motion to adopt the report of the Committee and asked Musa Adede, a delegate from Cross River State, to do so.  The motion was seconded by Adaeze Nwuzor from Ebonyi State.Mr. Kutigi also said “This appears to be the end of the plenary. We shall resume on August 4 for the consideration of the draft report.”Ibrahim Ida, a former senator for Katsina State moved the motion for adjournment while Okon Osung from Akwa Ibom seconded the motion.