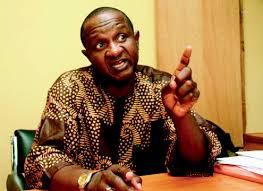 ASUU’s president condemned the general insecurity in the country and in particular the abduction of the school girls of Chibok in Borno State.

The Academic Staff Union of Universities, ASUU, has condemned the on-going National Conference; saying the concept behind it is “dubious in intent”.

The National President of ASUU, Nasir Faggie, addressing journalists on Monday at the Labour House in Abuja, said that the conference “is not capable of making substantial progress in obtaining the goal of dealing away with structures of domination”.

“Since its processes are rigged and the conference has no constitutional basis, the outcome of the conference must be deemed illegitimate, even if the National Assembly comes to endorse it,” he said.

Mr. Faggie said the National Conference was conceived without democratic, national debate, or affirmation through a legitimate procedure in the democratic political institutions of the country.

He said the conference is filled with representatives of political military business wings of the self-same groups /class that have created and sustained the political and economic crises suffered by the country and its people.

Mr. Faggie said that what is going on is a conference of citizens not elected by the people and not mandated by the communities through popular democratic procedures.

“The delegates have not emerged by anything like the popular will-they were not voted for, not chosen by deliberating people’s assemblies, they do not represent any communities. They are rulers, government representatives and representation of the rich and the poor,” he said.

He called on Nigerians not to be deceived to believe that liberal democracy will grow in the country where the basis of social policy is the choice policies that breed poverty, class ethnic and religious
crises.

Mr. Faggie also condemned the general insecurity in the country and in particular the abduction of the school girls in Chibok, Borno State. He also condemned the assault on the rights of Nigerian to peaceful protest as exhibited by the recent attack on polytechnic and education colleges’ lecturers; and Monday’s arrest by the police of a female protest leader of the #Bringbackourgirls.

Mr. Faggie challenged the Federal Government to come to the aid of victims of the Boko Haram attack.
“We challenge Government, if it is serious, to put in place immediate relief for persons whose means of livelihood and properties were destroyed in the insurgency arrack.

“In the end, what will resolve the Boko Haram problem is responsible governance, war against unemployment, and the provision of social welfare amenities for all Nigerians.

ASUU further called on the government to urgently address and resolve the issues involved in the ASUP and COEASU strikes in the interest of the Nigerian people and the development of sustainable education.