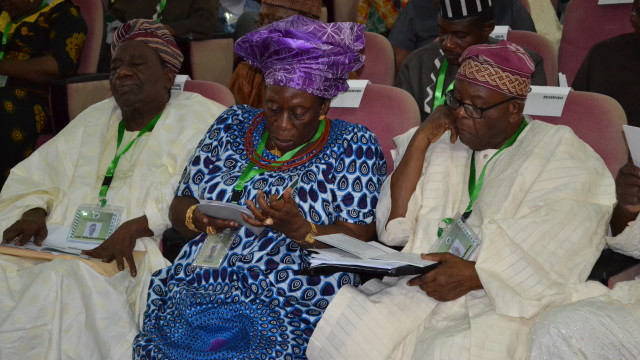 Tempers almost rose at the ongoing National Conference on Tuesday when representatives of the Christian Association of Nigeria, CAN, reeled out figures of Christians killed in the northern part of the country.

The Christian leaders also complained that Nigeria’s 1999 Constitution does not mention Church, Christianity and its founder, Jesus Christ as it does for the Islam and Traditional religion.

The intervention of the presiding officers, however, calmed the situation.

During the resumed debate on the March 17 speech by President Goodluck Jonathan to inaugurate the conference, a delegate representing Christian Leaders, Joseph Bagobiri, a Bishop, said the 1999 Constitution was not fair to Christianity as the religion, its founder, Jesus, and the Church did not get any mention in the document.

He said the Islamic legal code, Sharia, was mentioned 73 times, Islam, 28 times, and Muslim, 10 times, giving the impression that Nigeria was an Islamic State.

Soon after, another Christian leader, Bosun Emmanuel, reeled out the same figures, but went further to disclose the number of widows in a church whose husbands were killed by some people he did not name.

According to the clergyman, in a particular Christian denomination in the north, there were 501 registered widows as at March 2001 while the figure increased to 900 in 2009 and 25,000 in February 2014 because their husbands were killed by some people he did not name.

Mr. Emmanuel was however interrupted by a former Minister of the Federal Capital Territory, FCT, Adamu Aliero, who shouted “Point of Order! Point of Order!

When he was eventually recognised by the Deputy Chairman of the Confab, Bolaji Akinyemi, to speak, Mr. Aliero, a Federal Government delegate, who relied on Order 9 (7) of the Conference Rules, complained that Mr. Emmanuel was not addressing issue the president raised in his address.

“The speaker on the floor is bringing issues that are not related to the President’s address,” he said.

Mr. Aliero, who is a former governor of Kebbi State and former senator, asked the presiding officers to direct the clergyman not to go ahead with the issue of religion he was raising, but restrict his contribution to the president’s address.

Although there were shouts of no! no! no! by some delegates disapproving Mr. Aliero’s Point of Order, for a few seconds, the deputy chairman could not rule on it and had to consult the Chairman, Idris Kutigi.

Mr. Akinyemi, after the consultation ruled Mr. Aliero out of order.

“ I cannot uphold your Point of Order,” the deputy chairman said, adding that the way the conference had held its session, delegates had been allowed to speak on issues bothering them and the people or group they were representing.

He, however, appealed to the delegates not to speak in the manner that would offend their colleagues.

After the ruling, Mr. Akinyemi asked Mr. Emmanuel, who was all the while standing, to continue with his contribution.

The clergyman asked the conference to take a closer look at the Constitution with a view to rectifying the religious imbalance in the document.

“We, Christians do not hate the Muslims. I live in the South West and there is peace and we want to see that peace all over Nigeria,” Mr. Emmanuel added.

He told journalists after the session that the figures emanated from the Church of Christ in Nigeria, COCIN.

He said, “In Jos, 7th March, Fulani herdsmen attacked Dogo Nawa and killed 501 Christians in the village, including children. At the Church of Christ In Nigeria, in 2001, the Women Fellowship had 500 widows, but as at 2008, they had 900 widows. But in 2011, they had 25,000 registered widows and that is one denomination in one state.”