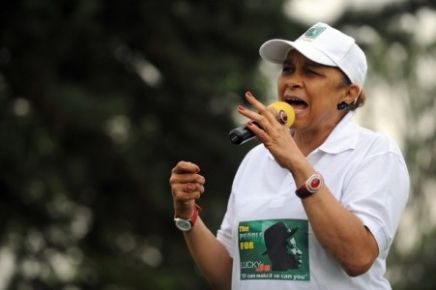 Another South-South delegate accuses Devolution of Power Committee of lying

A member of the National Conference, Ankio Briggs, whose minority report on Devolution of Power was rejected by the Conference, says she is not perturbed by the development.

Ms. Briggs, a Niger Delta activist and Federal Government delegate, had formally submitted the 13-page minority report to the Conference on Thursday.

She had submitted the report after the Committee’s co-chairmen, Victor Attah, a former governor of Akwa Ibom State, and Ibrahim Coomassie, a former Inspector General of Police, presented its main report.

However, the Conference Chairman, Idris Kutigi, said it would not accept the report because its rules do not allow for minority report.

Ms. Briggs told journalists that she was not disturbed about the Confab’s action and insisted that the decision taken by the Committee to retain the 13 per cent derivation fund for mineral producing states was not unanimous.

She said her people back home would react at the appropriate time.

“Well, that is democracy. I have exercised my democratic right by standing up for what I believe in on behalf of my people and my region. And the chairman of the conference seems to have done so too,” she said.

“But let us not in any shape or form think that this is the end of the matter. First of all, the Niger-Delta people will have to have their own reaction on this. The floor will also discuss the content of the report of the Devolution of Power and the issue of 13 per cent status quo remaining. So, I am not in any way moved by it. But it shows clearly that in many cases the majority actually oppresses the minority.”

The delegate explained that the content of her report was merely re-emphasizing the agitation of the demands of the oil rich states for 50 per cent derivation.

She said, “The content of the minority report is once again re emphasizing issues, if you like, the position of the Niger-Delta that are producing the wealth of this nation and the two other oil producing states in the south east and of course, Ondo State.”

“The position has always been that we are here to ask for 50 per cent derivation or we have 100 per cent resource control and pay not more than 50 per cent to federal government.

“Whichever way, you look at it, we will be satisfied, I mean the people of Niger-delta that have paid such a huge price for over 50 years in environmental devastation, lack of development and all of that. We think is time that if we look back to the 1963 constitution where other people had 50 per cent of what they were producing.

“And if we say we are here to see how Nigeria is going to move forward on the basis of justice and equity, then I think that we should start with the 50 per cent derivation. Anything short of that, I think we will be deceiving ourselves.”

The delegate who hails from Rivers State said during the Committee’s discussion on the derivation, the issue was just put on the table without discussion and that though majority agreed, she refused to support it.

According to her, “It was just put on the table and suggestion was made that status quo should be allowed, that is 13 per cent should be maintained. The issue of whether it should go up or come down was never discussed and so, I am amazed to hear there is a claim that it was unanimous.

“Well, it was, you can take it that the majority had agreed and I am the lone voice. You can read like that. Bearing that in mind, I think I reserve the right on behalf of my people to state clearly that that was the case.”

A Civil Society delegate from the South-South, Isaac Osuka, also faulted the report of the Committee, saying that there was an inherent lie in the report.

“The point is that there is an inherent lie in the report of the committee on devolution of powers,” Mr. Osuka alleged.
“The claim they made that the report they submitted was based on consensus. That is a lie because if you have a situation where there is a minority report it means that consensus was not achieved. If you have a situation where a member of the committee did not append his or her signature to that report, if means that there was no consensus.

“If you have a situation where that member made her position clear to that committee, it means that there was something fundamentally wrong in preventing voting because there are two options we have in this conference. It is either there is consensus or voting. In this case, there was no voting. So, there is something very fundamentally wrong. The right of the member to present her minority report cannot be taken away from her.

“We are setting a very dangerous precedent. This is not the first confab or conference that we have had in this country and at every case in the past, we have always had minority. In fact, the land use act that is a subject of discussion today is a product of minority report in previous conferences. But we have a situation where those representing the interest of major ethnic groups here including the chairman of the conference who has a vested northern agenda have decided that they have to shoot down the minority report.”

The delegate accused Mr. Kutigi of deferring contentious issues and subsequently taking them to a group of elders to resolve.
Mr. Osuka said, “Look, the way things have been going on the conference, anything there is contentious issue, the chairman will always say, let’s hold on a minute. Let’s go back, there is a group of elders that I will refer to address this matter. We will come back to plenary to make sure that everything is acceptable to us.