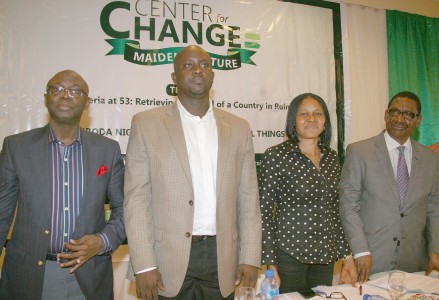 Convener of the Save Nigeria Group (SNG), Tunde Bakare, has welcomed the proposed national conference with some level of caution but warned that if the nation does not talk before the next general elections, the country might cease to exist.

The pastor of the Latter Rain Assembly gave this remark at the launch and maiden lecture of the Centre for Change in Lagos on Tuesday, where he noted that Nigeria should be a model for not only Africa but the black race.

Mr Bakare who is a stunch critic of President Goodluck Jonathan, subtly endorsed the planned conference at the event which had the theme; retriving the soul of a country in ruins.

The former Vice Presidential aspirant, who noted that the amalgamation of the country was not a mistake and that the things that unite the country and more than those dividing it, said “that is why we must all reason together when we have the chance to talk” adding that “and we must walk the talk.”

Without mentioning his name, Pastor Bakare subtly criticised the national leader of the All Progressive Change (APC),Bola Tinubu, for his stance in opposing the planned national conference.

Referring to the former governor of Lagos state, Pastor Bakare inferred that ”those that have being campaigning for the national conference in the past are now campaigning against it because tables have turned and they have benefitted from the public treasury.”

“If we do not talk before the 2015 elections, we can just kiss Nigeria goodbye,” the clergy predicted.

Mr. Tinubu has repeatedly expressed his objection to the national conference, describing it as a diversion and ill-timed, with about 15 months to the next elections.

According to Mr. Bakare, ”Nigerians have wept and prayed, marched and protested, the time has now come for us to take our destiny in our hand and we must get set to rebuild and reconstruct from region to region.”

At the event, Professor of African Literatures and Cultures and PREMIUM TIMES columnist, Pius Adesanmi, described Nigeria as being without a soul and spiritual principle.

Mr. Adesanmi who was keynote speaker at the lecture with the theme “Nigeria at 53: Retrieving the Soul of a Country” said it is has become impossible for Nigerians to forge a soul for the country because “we aim for material gains and not the ideals to create a strong nation.”

He said the present political class was too tainted by corruption to “mobilise Nigeria to national ideal.”
“Nigeria has no business being an atrophied decaying giant groping blindly in the dark in search of a soul at 53. No. We have no business being where we found ourselves today.”

“When we allow a thousand flowers to bloom, when we embrace the idea of a nation as a perpetual plebiscite, we open up a critical space of negotiation in which our differences will gain a space in the sun and stop being a source of repressed frustration, we will truly have begun the journey toward recreation,” he said.

Also cautiously welcoming the national conference, chairman of the event, Itse Sagay, noted that ”regardless of motive, intention, we should seize the moment and talk about our problems.”

Also admitting that it is right to suspect the President of some ulterior motives in organising the conference, Professor Sagay said ”Jonathan might not have brought this conference in a state of true altrusion and for some private purposes but God can use people to make some desired changes, so lets all go out there and make this conference work.”

“Nobody has said the national conference will be successful but let us try and hope that at the end of the conference, we will have a Nigeria with a future,” he added.

The professor of constitutional law then advised that the conference must see to the removal of issues such as electricity, police, railway, minimum wage and census from the exclusive list and the cancellation of the federal allocation account.

He also suggested the return to fiscal federalism and asymmetrical federalism which according to him, will allow any region or state to chose what it wants from the federal government.
\
“If some states want minimum wage and no state police, the asymmetric federalism will let them and let those who do not, have their way,” he said.

“There is the need for states to identify themselves and state that we are united with Nigeria but are unique and want to express ourselves.”

The leader of Centre for change, Joe Odumakin, in her remark, warned that “there must be no no-go areas in the national conference and that decisions reached at the conference must not be tinkered with but only by a national referandum.”