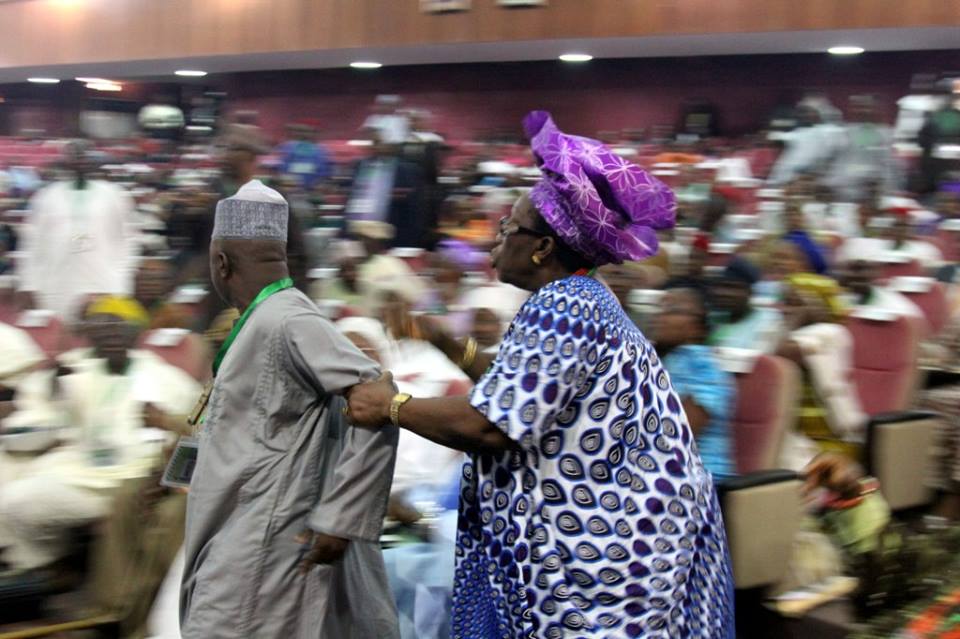 “The day oil will be discovered in Lake Chad, this opposition to resource control will change.”

Some delegates to the ongoing National Conference have agreed on the need for devolution of power from the federal country.

The decision was taken by the Conference’s Committee on Devolution of Power co-chaired by former Governor of Akwa Ibom State, Victor Attah, and former Inspector-General of Police, Ibrahim Coomassie.

During the debate on the issue on Tuesday, members of the Committee were said to have given overwhelming support for the powers of the Federal Government to be reduced.

A source within the Committee, who did not want be named because he lacked the power to speak publicly on the matter, said majority of members agreed that the Federal Government should be stripped of its excessive powers.

He said, “If there is one thing we have all agreed irrespective of which part of the country we come from, it is on the fact that the Federal Government must not wield its enormous powers any longer.

“When we were debating on the matter yesterday (Tuesday), we were unanimous about the need to reduce the enormous powers of the Federal Government. But we are yet to decide where the power will devolve to. We will take that decision during the week.

“Power may devolve to the regions, zones or the states. Whatever may be the case, the Federal Government will lose a greater chunk of the power it is wielding now.”

However, the debate on resource control was dogged by mutual suspicion and resentment between Northern delegates and their Southern counterparts.

Another shouting match ensued when a Federal Government delegate, Asara Asara, insisted that the South-South zone demanded total control of resources in the area, adding that the people of the area will be willing to die to achieve that goal.

Mr. Asara, who started by debunking claims that the nation’s oil resources were developed from resources from other regions, said oil was found even before Nigeria gained its Independence in 1960.

While hitting the table in anger, he said, “I am speaking because Nigeria is heading towards a precipice. If we are not careful, this country will break.”

To drum home his point, he shouted, “This country belongs to all of us. I have the right to this country just like every other Nigerian. The money we use is our own and nobody shall tell us how to use our money.

“One kilometer of road in the Niger Delta is equal to 30 kilometers in the North. In a little while, there would no land to bury our deaths and we have to appeal to the Federal Government to give us permission to bury our deaths.

“The day oil will be discovered in Lake Chad, this opposition to resource control will change. The constitution is old and cannot address contemporary realities.

“We will beg nobody. We shall control our resources and we shall contribute to the center. We will be ready to die for it. Whatever way you want it, we will give it to you,” referring to Northern delegates opposed to the policy.

Another Federal Government delegate from the South-South, Annkio Briggs, later joined the fray when some other Northern delegates started making side comments to what Asara said.

When tempers settled a bit, Mr. Attah, who presided over the sitting, called Mr. Asara to order and requested him to withdraw the threat that the South-South people would die on account of resource control.

Mr. Asara withdrew the threat but still insisted that the South-South will not stop demanding total control of their God-given resources no matter what people from other parts of the country feel.

But Mr. Yerima took an opposite position to Mr. Asara, saying that the Conference lacked the legal backing to discuss the issue of resource control.

While referring to the 1999 Constitution, he said, “All the resources we are talking about belong to the Federal Government. If the resources do not belong to you as a state, do you have the right to seek to control 100 percent?

“Legally, this Committee does not have the right to discuss this issue of resource. He said since the Constitution has not been abrogated, we cannot discuss this matter.

But when told that the Committee has the mandate to discuss the matter, Mr. Yerima agreed that the status quo should remain.

However, Jack Tilley-Gyado from Benue, said the demand for total resource control was good but ill-timed.

He said, “I believe that the timing of the request is wrong although the request is good. Even if the South-South is going to be given 100 percent, additional funds should be given to other states during the next 10 years to develop their own resources. And after that, we can come back to the table and discuss the issue of resource.”

Usman Farouk and Tanko Yakasai spoke against the call for total control of resources by the South-South zone, stressing that the North made huge sacrifices for the unity of the country.

Mr. Farouk said, “Today, the security of Nigeria is rested in the Nigerian Army; therefore, they are to defend the territorial land, the airspace and waters in Nigeria.
“I have not seen anywhere in the country where a state is given responsibility to run an army. I cannot see any land stretching for 300 kilometers anywhere in Nigeria.

“If onshore resources are given to the states, we cannot deny the federal Government control of offshore oil resources.”

On his part, Mr. Yakasai argued that when the country operated a regional structure, the regions did not give 50 percent of their resources to the center.

He said only 50 per cent of revenue that accrued from royalties and mining rent were given to the central government and not 50 percent of the entire revenue of the regions.

“We supported the initial agitation for the creation of Mid-West region. But when it came to the creation of states, the North made huge sacrifice by getting six out of the 12 states that were created by General Gowon.

“That single decision deprived the North, the power to maintain its majority with the control of 70 per cent land mass of the country,” he said.

A delegate from Lagos, Anthony Adefuye, called for utmost patriotism on the part of delegates in a bid to save the country from sliding into anarchy.

Mr. Adefuye said, “We in Lagos are asking for a special consideration. We are asking that what is going to centre should be reduced and given to the state.”

Ayo Adebanjo said the former Western Region started the agitation for resource control, adding that he was privileged to be part of those who trail-blazed the idea.

He said, “The West Region took advantage of the derivation policy of the time to take 50 per cent of the resources they produced.

“The North didn’t break and there was competition among the region. If it is true that we want to keep this country together, the crux of the problem we have today is a result of the impositions.

“It is unfair to refer to the problem we had in the past. We didn’t fight then but we want to fight now that the South-South has the oil.

“It was after the military coup of 1966 that the military imposed this system on us and it has been causing trouble ever since. This is the last time Nigeria has to remain together and I want to warn that no country goes to war the second time and survive.”

Members of the Committee could not reach a consensus on the matter until the sitting was adjourned for Thursday.