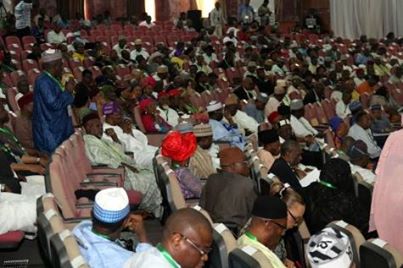 The committee set up a seven-member ad-hoc committee to recommend ways of implementing its resolution.

The National Conference Committee on Politics and Governance, on Tuesday voted to strip elected executive officers of their immunity from prosecution in civil and criminal proceedings. The committee said this is to avoid impunity in governance.

It however constituted a seven-member ad-hoc committee to study the implications of the decision and how it would work without affecting governance.

Section 308 of the 1999 Constitution provides that no civil or criminal proceedings shall be instituted or continued against the President, Vice President, Governor and Deputy Governor while in office.

The sub-committee is headed by a delegate of the Peoples Democratic Party, PDP, Olabode George.

Mr. George, a former military governor of the old Ondo State, told journalists after the adoption of his sub-committee’s recommendation that the immunity clause in the constitution had “violently raped Nigeria.”

He expressed joy over the adoption because some Nigerians had the impression that they were above the law.

Mr. George explained that in other to avoid unnecessary litigations against the concerned officials, a committee was asked to work out how it could be implemented before presenting it to the National Conference at plenary.

Mr. Ekpu said the recommendation came about because of the impunity of some public officers who could do anything without considering public interest.

He said the scrapping of the immunity clause would go a long way to caution them.

“We must admit that corruption is endemic in this country. People who hold high offices do anything and they need to be stopped of this impunity.”

However, a member of the Committee from Imo State, Mike Ahamba, said though he was opposed to the removal of the clause he eventually agreed with the overwhelming majority of its members.

He explained, “The problem is not the immunity clause, but the institutions. If we remove immunity clause it will not increase the number of people who will be transparent.”

Mr. Gana told journalists the decision was based on a clear consensus by members of the Committee, but that it was subject to the approval of the Conference in plenary.

“We took decision on the Immunity clause and it was a clear consensus, so that in the interest of zero to elegance for corruption, to promote good governance, to promote transparency, discipline,” he said.

“The fact that we don’t want people going around that the government being above the law, the issue of Immunity clause should be removed from our constitution.

“This is not yet the decision of the conference though, but this is what we are presenting to the plenary. I must say that the entire members of the committee went along with the decision. We had no reason to divide the Committee.

The former minister said the Committee was convinced that the Conference should send a clear message to Nigerians that no one was above the law.

“We must do the rule of law and that is how democracy should be. We are convinced as a committee that the Conference should send a clear message to Nigerians that no one is above the law.”

Mr. Gana said the Committee looked at the report on the Freedom of Information Act (FOI) and discovered that despite being given very important work by the constitution, the press was still not being given the desired cooperation or support to maximize the potentials of the Act in sourcing information.

“It has not been given proper attention and recognition and we have noticed this lack of compliance and we are determined to find a solution on how it can be effectively utilized so that the FOI is properly applied on both sides.”