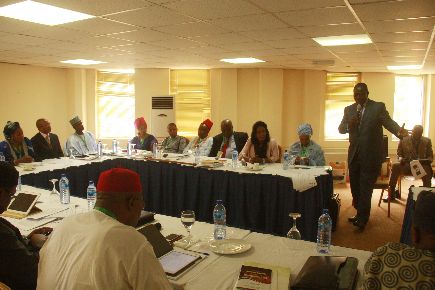 The Co-chairman of the Committee on Devolution, Victor Attah, disclosed the proposed formulae at the end its closed-doors session on Monday.

Mr. Attah said the decision was unanimous after going through the process of devolving powers and giving considerations to what the Committee believed would be the results coming out of other committees.

“I will like to tell you that it was not just a consensual agreement but unanimous by the entire committee,” he said.

The former governor of Akwa Ibom State said the Committee deferred the issue of horizontal sharing to Tuesday, though it went into serious business of discussing resource control.

He said, “Committee members acknowledged and accepted that the existing Constitution of Nigeria should form a point of departure. Anything we want to disagree with at least, that should be the basis.

“And since Section 44 (3) of the Constitution states that all minerals in any part of the country belongs to the federal government. If we accept that and the Committee accepted that, then where do we go from there?

“And we decided therefore that we should concentrate more on derivation rather than resource ownership by the areas where the minerals are found. In saying this, in defence of those who did not agree, I must say that there were some strong voices that said that they came here with the mandate to insist on 100% resource control!, which meant that the states should own, but it was pointed out that that could only come if that section of the Constitution is amended otherwise. We are to regret the fact that for them what they came with they will not be able to attain.”
Mr. Attah said the Committee decided that every member should state their positions again on the issue of derivation since at the beginning, there were suggestions that the issue of onshore/offshore dichotomy should be re-introduced.

He added that some members did not only call for increase in the percentage of derivation, but also canvassed for the scrapping of the Ministry of Niger Delta

“One thing that has guided us in the spirit of wanting to create a new Nigeria and launch it properly is the understanding that quite honestly development has been very uneven; that parts of this country that just have been neglected and that is why we are very pleased with ourselves when we resolved the issue of item 39 in the exclusive list that there must be a special fund be created.

“In fact, today we change certain words. Some say make available grants, we said no. Funds must be created to make it possible for those undeveloped parts of the country and those undeveloped minerals to now be developed.

“So that this derivation we can see is going to be in every body’s interest. I therefore expect that we are going to look at it very sensibly, in agreeing what should be the governing per cent-age for all derivations. “We believe that when we meet again tomorrow (Tuesday), even the thorny issue of dichotomy will be resolved.”