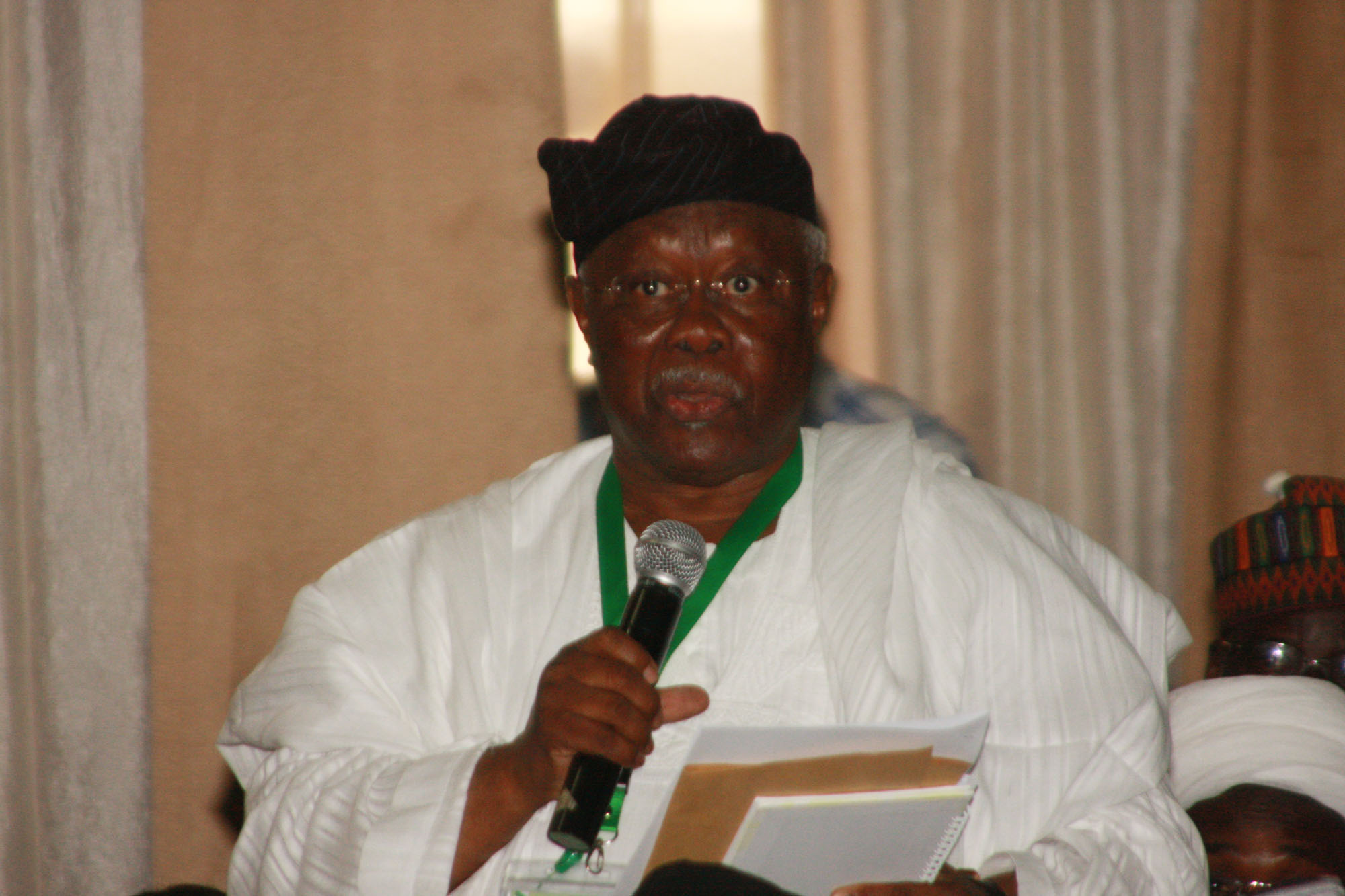 Bode George canvassed for the merger of EFCC, ICPC.

A Peoples Democratic Party, PDP, delegate to the National Conference, Olabode George, has called for total war against corruption, insisting that no Nigerian, no matter how highly placed should be spared in the war.

He also called for the dismantling and restructuring of the Economic and Financial Crimes Commission, EFCC, and Independent Corrupt Practices and Other Related Offences Commission, ICPC, in line with
similar agencies in other parts of the world to achieve greater efficiency.

Mr. George stated this in a three-page memorandum he presented to the Committee on Politics and Governance, which he is a member.

The former soldier and five others were, in December last year discharged and acquitted by the Supreme Court over allegation of contract scam valued at N85 billion while they served on the Board of the Nigeria Port Authority, NPA.

Mr. George, who the Chairman of the Authority’s Board, was sentenced to 30 months imprisonment in 2011 which he served out before the Supreme Court acquitted him.

In the memorandum to a Conference Committee, the PDP chief suggested ways to tame corruption in Nigeria, saying it must be fought with passion, impartiality and total commitment.

“Nothing should be spared. No one should be treated with deference. We must engage corruption as a collection challenge. We must inculcate the virtues of sacrifice and selflessness in our schools, in our churches, in our mosques and in the workplace.

“We must return to the Omoluabi ideal of industry of purposeful service and strict adherence to the truth. It is only when we engage along this path that we can begin to make serious incursion and
eventually dismantle the formidable super structure that corruption has become in our nation today.”

Stating that the genesis of corruption was as old as the skewed moral standard in Nigeria’s society, Mr, George traced the roots of the scourge to the sociological anomie of greed, avarice, debasement of traditional values, lack of contentment, and the desperate craving for wealth without the concomitant respect for industry and puritanical ethics.

“Majority of our people hurry after wealth at any cost without hindrances, without societal caution, and without the fear of God,” he said.

The PDP chieftain said corruption was indeed not about the government at the centre alone, stressing “I insist here and now that the ravaging venom of corruption is more pronounced, more devastating and more pernicious at the states level than at the federal level. The states and their various Assemblies are more audacious and more defiant in the pursuit of illegal and unconstitutional processes than any other arm of our democracies.”

Mr. George lamented what he described as “monumental gutting” of public funds through tax consultancy in his home state, Lagos.

He alleged that a former governor of the state, Bola Tinubu owns Alpha Beta, which collects taxes for the state. According to him, the company had been collecting through fiat and coercion, 15 per cent of Lagos’ monthly internal revenue.

“You do the Arithmetic. One man alone is collecting by crook and hook about 4.5 billion naira every month! This is unimaginable corruption and yet no one is saying anything. It is our collective indocility and indifference that is fuelling corruption in our country,” he said in the memorandum.

He explained that the university lecturer who coerces his students to part with some money to earn high marks and the judge who compromises on fairness and equity while virtually mortgaging the truth in exchange for monetary gains, are not only agents of corruption but violate the fabric of the society and destroy the victims of their illicit activities.

“I should know as I was once a victim of such judicial lynching,” the delegate lamented.

Mr. George called for the total overhaul of the EFCC and ICPC even as he canvassed for the merger of the two agencies to enable them become efficient.

“There is need to dismantle and restructure our anti-corruption agencies in line with the world standard efficiency of the FBI and the M15 in the United Kingdom,” he said.

“The EFCC and ICPC must be totally uprooted from the bottom to the top before we can well prepare these agencies as effective fighting tools against corrupt practices.

“As a matter of fact, the two agencies should be merged as one uniform structure and their agents should be retrained, re-schooled and be re-kitted about the fundamental appropriateness of their focus and their mission.”

While acknowledging that there were some brilliant young men and women in the anti-graft agencies, the delegate, a retired Navy Commodore said there were “equally some very notoriously bad eggs in their midst”.

He stressed, “As long as any member of such organisation is somehow compromised, the whole edifice will crumble, eventually losing its pristine effectiveness. Equally, the tradition of using police officers to supervise the EFCC should be scrapped and jettison. It adds no value at all to their operational effectiveness.”