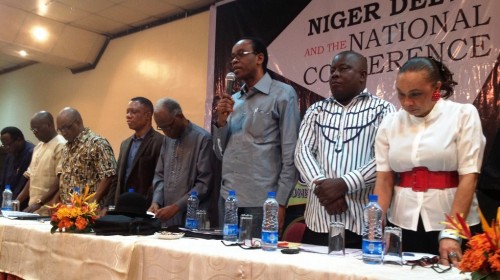 Today, Tuesday, 28 January 2014, representative organisations of nationalities, community groups and social movements held the Pan Niger Delta Conference (PNDC), with the theme, Niger Delta and the National Conference. The Conference is a non-partisan assembly, and a component of a process with the aim of appraising the socio-cultural, political and environmental challenges of Niger Delta vis-à-vis the deepening crisis of the Nigerian state.

The PNDC was attended by over one thousand delegates. Keynote addresses and messages were presented by leaders of thought and nationalities; social justice activists and others.

Nigeria has attained a century of existence. Over the course of the period, the country has had two distinct phases of struggle in the expectation for a viable nation-state. The first phase was the successful struggles against colonial rule. The second phase has been the unsuccessful struggles against the vestiges of colonialism and other self-inflicted contradictions in the post-independence phase.

As Nigeria begins its second century, it faces the challenge of organising a new generation of citizens that would live under conditions of dismantled structural contradictions without the constraints on peoples’ capacity to fulfil their potentials. The PNDC is part of the attempts to deal with that challenge.

Specifically, the objectives of this Conference are:

1. To identify the strategic interests of the Niger Delta at this historic moment, and to create a peoples’ platform for their pursuit;

2. To map out plans for the achievement of the strategic interests of the Niger Delta during the National Conference and beyond;

3. To draw up strategies that would help to prevent the difficulties that imperilled previous national conferences and dialogues with regard to attainment of the aspirations of the Niger Delta and other minority peoples.

The conference observed as follows:

1) The Niger Delta has been at the forefront of the struggle for the restructuring of the Nigerian state. This is based on the people’s conviction that a multi-ethnic nation-state like Nigeria can only exist peacefully on the basis of a truly federal structure that gives importance, equity and justice to all the components;

2) That the peoples of the Niger Delta believe that the diverse nationalities that make up the country can only coexist successfully and peacefully on the foundation of clear restructuring of the federation anchored on principles of free association and the right of nationalities and communities to have spaces for political and economic actualisation. These had formed the historical demands of the Niger Delta dating back to the time prior to the Henry Willinks Commission in 1957. We note that rather than address the real issues posed by our peoples, both the British colonialists and post-Independence rulers opted for gestures of development, which has deepened the crisis;

3) That series of conferences had held in the past, but none produced the desired solution to the problems of Nigeria, because of “No Go Areas” and other manipulations by agents of internal domination;

4) That having a President of Nigeria from the Niger Delta was neither a core demand nor is it a solution to the problems of the region, much as every individual in the country, including members of minority nationalities, can aspire to and hold the highest political office.

5) That the reality of a lopsided state structure has not changed. There is ongoing pollution of our lands and waters and despoliation of resources of the Niger Delta.

6) That President Goodluck Jonathan, in opting for the National Conference, has demonstrated recognition of the need to revisit the fundamental issues of state-building without which we will not have the community structures and community spirit for achieving best governance at all levels;

7) That in convening the National Conference, the central government should rely on the submissions of the ethnic nationalities in Nigeria rather than the report of the Presidential Advisory Committee (PAC) on National Dialogue. Reason being that the PAC’s report is, in several respects, anti-minorities, anti-federalism, and merely seeks to strengthen the fraudulent 1999 Constitution.

Based on the foregoing observations, the PNDC resolved as follows:

1) That we welcome the initiative of the executive arm of the central government with respect to the National Conference, and resolve to mobilise our peoples to participate fully;

2) That the primary mandate of the National Conference is to restructure Nigeria into a truly federal state where the components have political autonomy;

3) That representation at the National Conference should be based primarily on ethnic nationalities, and may include equitable participation from national interest groups;

4) That the resolutions of the National Conference should be ratified by a referendum organised in line with the principle of “peoples’ suffrage” as opposed to universal suffrage. By “peoples suffrage” the conference means the votes of the various nationalities that make up the country;

5) That the National Conference should culminate in a new Constitution for Nigeria, which should be the basis for the conduct of the next General Elections;

6) That the historic demands of the Niger Delta peoples and other minorities in Nigeria for identity, resource ownership and control, and environmental justice must not be reduced to development and infrastructure politics. What the Niger Delta peoples need now is freedom to actualize themselves to their full potentials, and self-determination within a Nigeria founded on equity and justice;

7) That conference endorses the setting up of a platform for engagement on the National Conference process, including development of mechanism for assembling the positions of the peoples of the Niger Delta.

The conference agreed to initiate collaborative efforts with other regions through broad outreaches, networking and consultation to build confidence and consensus, in order to avoid potential conflicts as we engage the National Conference processes.