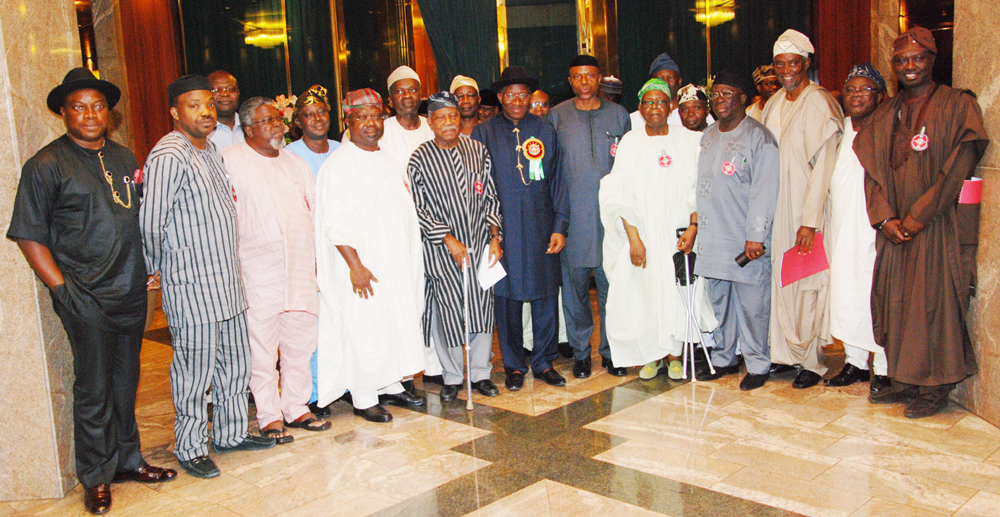 Robert Audu, a former permanent secretary said funds for the 2015 general elections could be used to provide employment for Nigerians.
Few hours after the discovery of a strange draft constitution generated a mild uproar at the ongoing National Conference, a delegate, Robert Audu, has released a document seeking for the extension of the tenure of President Goodluck Jonathan, his deputy, Namadi Sambo, and all the first term governors.
In the two-page document dated June 11, the delegate called for the amendment of 1999 Constitution to allow them a six or
seven-year single term immediately.
The proposal titled “Adoption of Single Term to replace the two terms in the Constitution for Election of President and Governors,” is on Mr. Audu’s letter head and was circulated to the delegates after the plenary session on Monday evening.
Mr. Audu, 64, a former permanent secretary, is one of the six representatives of the retired civil servants. He hails from Okpo,
Olamaboro Council in Kogi State. He aspired to the governorship seat of the state in 2007.
He becomes the second delegate to call for the extension of the tenure of the president and governors.
Okon Osung, a delegate of the South-South geo-political zone, had in May called for the postponement or deferment of the 2015 elections at least by 18 months while retaining the democratic institutions at all levels of governance.
In his proposal, Mr. Audu said under the Olusegun Obasanjo Presidency, the single term of six years stood out as an acceptable proposition and that what was in contention was the mode of implementation, notably the take-off date and the obvious implications for incumbent president, vice president, governors and deputy governors.
According to him, while a school of thoughts held that the six year singe term option should start after the Mr. Obasanjo two-term tenure in 2007, the other school of thought opted for the translation of the incumbent second term to the six year single term.
He said though the idea did not go down well with some people, a group introduced another novel idea of extending the existing two terms in the constitution to three terms which ignited the now infamous “third term” controversy under the Mr. Obasanjo Presidency.
“Tenure commencement is a landmark decision requiring compromise, sacrifice and a demonstration of the Nigerian spirit by all. The President, Vice President and First Term Governors/Deputy Governors are the arrow head or ‘guinea pig’ for this new dispensation,” Mr. Audu said.
“The consequential loss of tenure for the President/Vice President is one year while governors/deputy governors will lose two years if six-year single term is adopted but adoption of seven-year single term will not affect the aggregate tenure of the incumbent president.
“The hassle of campaigns and what is more, the savings of billions of Naira from second term election can be utilized to pay unemployment subsistence allowance to the large number of unemployed Nigerians.”
The delegate said previous attempts at the adoption of a single term did not succeed because of conflict of interests. He said only a body like the national conference could dispassionately examine his proposal and adopt it in the best interest of the nation.
He said, “I recommend single term of six or seven years and propose that i) the National Assembly amend the 1999 Constitution to allow for a six or seven year single term to take effect IMMEDIATELY. Ii) Incumbent President/Vice President and First Term Governors/Deputy Governors translate to a six- or seven-year single term and their tenure to terminate in 2017 or 2018 in the spirit of “Doctrine of Necessity” compromise and political expediency.”
Mr. Audu asked the Independent National Electoral Commission, INEC, to shift the coming general elections for the category of public officials to 2017 or 2018 while elections to fill vacancies of second term governors/deputy governors should hold in 2015 as originally scheduled.
“Only a political solution will assuage the concerns of those adversely affected,” he said. “At no time can adoption of this noble amendment be smooth, as desirable as it may be especially as it fast-track rotation and promotes national harmony.”
In a separate two-page document, Mr. Audu called for a 50-state structure for Nigeria.
According to him, there should be 27 states in the northern part of the country while remaining 23 should be in the southern part.
Mr. Osung had earlier called for the postponement of the 2015 general elections by 18 months.
“At this critical juncture in our national history, a presidential or National Assembly declaration if a politico-administrative moratorium or cooling off period before the conduct of the third Transition Elections scheduled for February 2015 has become an imperative necessity,” he had said.
“This calls for a postponement of the or deferment of the scheduled 2015 Elections by at least 18 months while retaining all the
democratic institutions at all levels of governance and across the entire spectrum of the country’s political divide, without any basis to the statutory termination dates of such democratic institutions.
“This implies the retention of the presidency, offices of governors in the states, the National Assembly (Senate and House of
Representatives), States Houses of Assembly, local governments chairmen, the Independent National Electoral Commission and the respective State Independent Electoral Commissions.”
The debate on the report of the Committee on Political Restructuring and Forms of Government commences on Wednesday and it is unclear if Mr. Audu will use the opportunity to raise his proposal.
Sharing
Tags 1999 Constitution, 2015 general elections, confab, Namadi Sambo, National conference, news, Nigeria, Nigeria National Conference, Okon Osung, Olusegun Obasanjo, Premium Times, President Goodluck Jonathan, Robert Audu, tenure extension