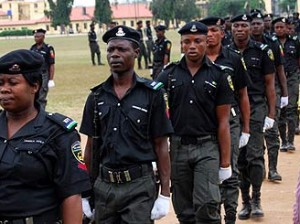 The committee used a voice vote to arrive at a decision.

The National Conference Committee on Devolution of Power on Monday blocked moves for the creation of state police.

During the debate on the creation of state police, some delegates who spoke said many states in the Federation already have security outfits that were akin to the police.

They also claimed that state governors were already funding the federal police through the provision of vehicles, equipment and funds.

A delegate from Akwa Ibom State and Professor of Law, Nsongurua Udombana, said worsening security situation in the country required a different approach to policing.

He argued that the creation of state police could help address some of the challenges faced by the Federal Police.

“Mr. Chairman, the creation of state police will make policing more effective at the local level and will allow states to address their peculiar security challenges.

“Mr. Chairman, the move will also allow states to share in the burden of police funding and will promote the spirit of true federalism in which the state and Federal police will complement each other,” he said.

A delegate from Ogun State, Ayo Adebanjo, said it was wrong for a country that prides itself as a federation to operate a central police.

He drew attention to what obtains in advanced democracies including United Kingdom and the United States, where policing is carried out at the center and by the components.

He said, “Mr. Chairman, we cannot concentrate police power in the center. It is “unfederal.” We cannot continue to say it’s a Nigerian factor. What evil will it do if we have a federal police and a state police too?

“We should not make this issue confrontational. The issue of Boko Haram could have been tackled if we had a local police. In the interest of national security, we should allow for state police.”

On the other hand, those who kicked against the move argued that the policy could result in abuses, especially by state governors.

They noted that even under the present arrangement where the police is under the Federal Government, state governors still use them against perceived opponents.

They drew attention to the creation of State Independent Electoral Commissions and how governors have hijacked the process to install their cronies in political offices.

One of the major opponents to the move, Jubril Aminu, said the country was not ripe for state police and argued that governors would use it to intimidate their opponents.

He said, “Mr. Chairman, let us not sit down here and approve the creation of state police. It will not work because governors will use the police under them to intimidate and chase out their perceived enemies and opponents.

“I suggest that the police should remain on the exclusive legislative list to forestall abuses by governors and political office holders. Nigeria is not ripe for state police.”

After an exhaustive debate, the Co-Chairman, Ibrahim Coomassie, who presided over the session, called for a vote. In a voice vote, majority of the delegates voted to stop the creation of state police.