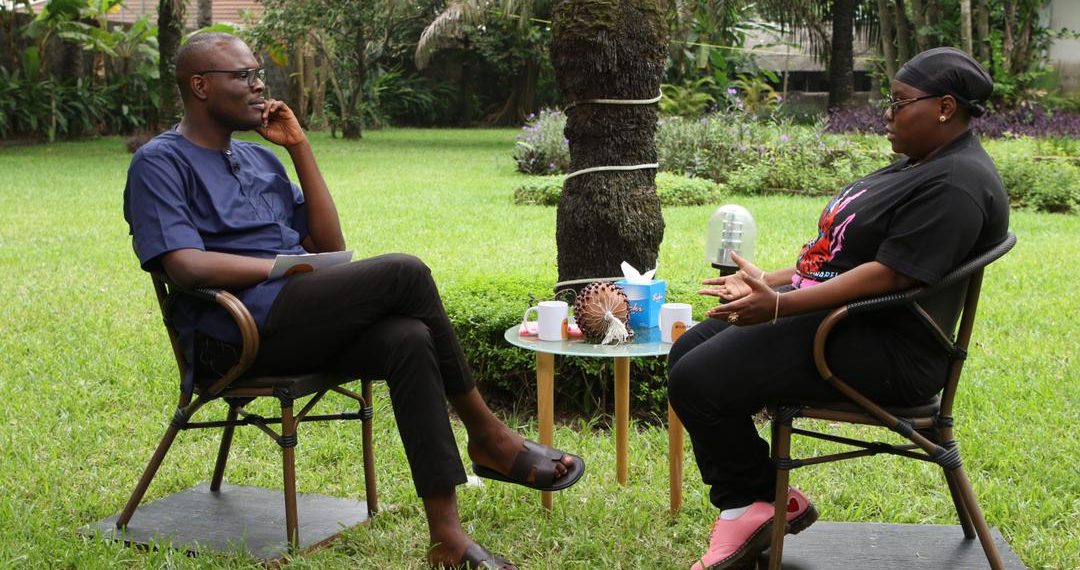 Teni’s father was a retired Nigerian Army Brigadier-General, S. O. Apata, who was assassinated in 1995.

This week’s episode of #WithChude has revealed a different side to the award-winning artiste and entertainer Teniola Apata.

#WithChude is a special series of targeted multimedia conversations and investigations focused on narratives that enable and strengthen the mind, heart, and spirit. The show is anchored by the founder of Joy, Inc., Chude Jideonwo.

In this rather emotional interview, Teni discussed her views on feminism, dealing with the loss of a loved one, and the inspiration behind her hit single, ‘Uyo Meyo’.

Teni said she was used to getting her way because she was born into a wealthy home. However, after her trusted assistant passed on, she soon realised that death was not something that could be solved with money, phone calls, or connections. She also revealed that it was at that moment that she discovered that she was not “invincible”.

The death of her assistant was not Teni’s first encounter with losing a loved one. She also lost her father at a very young age. This tragic loss is the inspiration behind the song -Dad’s Song – on her recently released debut album, ‘Wondaland’.

“Dad’s song is a song for everyone that has lost someone. Dealing with loss is crazy because people tell you that you’ll get over it, but you never get over it. You just don’t get over the loss”, said Teni.

“When I was recording this song I was sitting in my living room and watching my father’s funeral, his body in the casket, my mother crying. I needed those emotions to be able to record that song in its true form. Everything I sang had to be from a place of truth,” she continued.

Teni’s father was a retired Nigerian Army Brigadier-General S. O. Apata who was assassinated in front of his family on January 8, 1995.

One of his legacies is Apata Memorial High School, a military-style private boarding school in Lagos, Nigeria. It was founded in 1980.

Teni spoke rather fondly of her father, describing him as “a genius” and “a man deserving of idolisation”. She also revealed that her father planned ahead for the family, such that even after his death, she was still able to go to school in the United States, and her family could live a decent life.

When asked about her hit single ‘Uyo Meyo’, Teni told Chude that her being able to finally graduate after several challenges were her inspiration. “Not being able to graduate on time slowed me down from my music. My parents said, ‘if you’re going to make music, you have to graduate’. I was very frustrated”.

“I remember I was in a car driving to my graduation when I recorded the song, and I was just thinking of all my hard work. My mum is from Ondo, and so Uyo Meyo means, when others win and you celebrate with them, your own too will come. I was happy for my younger sister when she graduated before me, and when my turn finally came, I was happy, and that’s where that song came from,” she said.

In 2020, Teni’s tweet about feminism sparked controversy amongst Twitter users. Teni, however, explained to Chude that she was misunderstood and that sometimes words don’t always come out the way you want.

She further highlighted that growing up in a polygamous family with three mothers who were in control of her late father’s assets; she had no reason to look down on feminists.

“Feminism to me is a lifestyle; in fact, it’s a movement. I have always stood up for equal rights. I am coming from a place where women were in control. It is important for women to take charge. I have seen women do it so I know it’s possible,” she continued.

New episodes of #WithChude show every Saturday at 9 pm on TVC Entertainment, with reruns every Sunday on Wazobia TV at 5 pm and every Thursday on EbonyLife TV at 7:30 pm.

INTERVIEW: I don’t know if I would have had mental, physical strength to have Fela as dad – Made Kuti

INTERVIEW: Why Nigerian musicians can’t do away with vulgar lyrics– rapper, Dandizzy

INTERVIEW: ‘Use your people, not the people’ — Chike to independent artistes