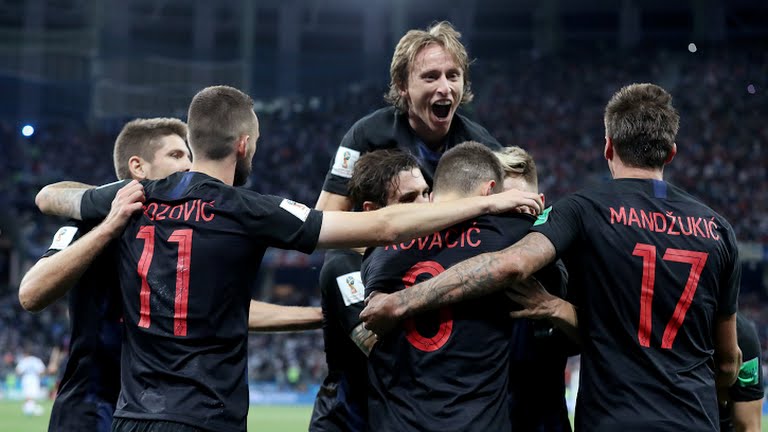 Croatia celebrates their win against Argentina in group stage.

Three goals in the second half – the first a bad mistake from 36-year-old Ivan Caballero, dispatched by Ante Rebic, and then a stunner from Luka Modric 10 minutes from full time before a walk-in by Ivan Rakitic – saw Lionel Messi and Argentina condemned to a bruising defeat – their biggest group stage defeat for 60 years.

Meanwhile, Croatia are through to the second round.

A very cautious half saw the two sides measuring out themselves at the start but Croatia’s Ante Rebic was his usual bustling self. The Croats had the first shot on target in the fifth minute but Ivan Caballero pushed Ivan Perisic’s effort out for a corner.

Ivan Rakitic found right back, Sime Vrsaljko, in the box but the Atletico Madrid player could not direct his pass to Rebic, who would have had a goal scoring chance. That was the 10th minute and though Argentina were controlling possession, Croatia were proving the more dangerous.

Dejan Lovren had to put his body on the line on 14 minutes as Maximiliano Meza got a shot off in the box – deflected out for a corner. By the 20th minute mark, Argentina had 63 per cent of the possession but were going nowhere fast.

Enzo Perez and Argentina believed they should have been awarded a free kick on the edge of the Croatian box in the 19th minute but video replays showed the Argentine midfielder dived.

On 21 minutes, Marcos Acuna swung in a cross from the left and the cross skimmed off the Croat crossbar. Nine minutes later, Perez should have scored after a miscommunication between Lovren and Subasic presented the chance to the late call-up to the Argentine squad.

A gilt-edged chance was presented to Mandzukic on 33 minutes from a Vrsaljko cross but the Juventus forward surprisingly headed wide with Caballero at his mercy.

Aguero had seven touches of the ball in that first half while Lionel Messi had 20. Something had to change in the second half.

Argentina tried to step up the pressure immediately from kickoff as they played more progressively with Messi dropping a bit into midfield territory. Gabriel Mercado was shown Argentina’s first yellow card on 51 minutes for a flagrant foul on Rebic.

Aguero on a sweet turn in the 52nd minute shot tamely at Subasic; and straight down to the other side, Croatia raced. After a mistake from Cabellero, Rebic dispatched a first time volley to give the Croats a deserved lead.

Despite Caballero’s age, 36, he was earning just his fifth cap for Argentina.

The aftermath of the goal saw Gonzalo Higuain on for Aguero. Mandzukic almost got a second from a Perisic cross but it was deflected for a Croatia corner.

Eduardo Salvio went off for Cristian Pavon as Mandzukic got booked for a foul on 58 minutes. Jorge Sampaoli was prowling the touchline like a caged Tiger as Argentina were thrown into desperation mode.

On 60 minutes, the goal-scorer, Rebic, went off injured, replaced by Andrej Kramaric. Croatia somehow got the ball away for a corner. Just as Messi got ready to pounce on a rebound from a Subasic save, Rakitic was on hand to clear the danger.

Otamendi was all over Mandzukic’s back and the referee rightly awarded Croatia a free kick from which Mandzukic fired into the side netting. Vrsaljko was booked for a nasty challenge on Acuna in the 67th minute. Paulo Dybala came on for Perez as Argentina opted for their two No. 10s.

Dybala got a shooting chance on 72 minutes but curled his effort well wide. There was a coming together between Messi and Ivan Strinic in the 74th minute, which momentarily threatened to boil over.

Tempers were at fever pitch on 75 minutes when Otamendi floored Mandzukic, with the Croats expectant that the Argentines would put the ball out so that Mandzukic could be attended to, which didn’t happen.

Lovren got his challenge right on Pavon but conceded a corner, which was well cleared. Luka Modric then hammered a nail further into Argentina’s coffin in the 79th minute as he danced on the edge of the box before Otamendi before unleashing a piledriver that flew past Caballero.

Otamendi lost his head in the 85th minute and was booked as Argentine frustration spilled over. Rakitic, who had been fouled for the free kick then hit the angle and post. Acuna was the next Argentine to be booked for a high challenge on Vrsaljko. Domagoj Vida then blocked a goal-bound shot with four minutes added.

But Croatia had the last laugh over a ragged Argentine side as Rakitic walked in the third goal two minutes into added time. There surely is no coming back from this!

Argentina boast just one point from two games. Possible elimination from the group stage of Russia 2018 is now a possibility.

Can there be any redemption for Messi and this Argentina team with the third match yet to be played? A lot would depend on the result between Nigeria and Iceland on Friday. The reality is that after two matches in Russia, Messi is yet to score while Cristiano Ronaldo has already scored four.