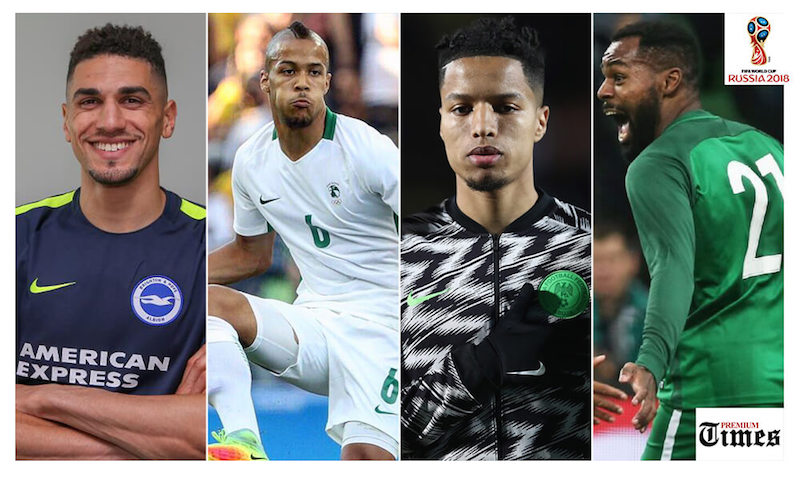 When the Super Eagles of Nigeria file out on Saturday to do battle against Croatia at the Kaliningrad Stadium, it is possible all four defenders chosen by Gernot Rohr would have been born outside Nigeria.

At right-back could be Tyronne Ebuehi; at left back, Bryan Idowu, and in central defensive positions will be Leon Balogun and William Troost-Ekong. Balogun was born in Berlin, Germany and did not visit Nigeria until 2014.

Ebuehi, born in Harlem, Netherlands, resisted the call to play for the Eagles for a whole year before making his debut in 2017. Idowu was born in St. Petersburg, Russia, and is considered a Russian because he has played all his life in the country until he was capped against Argentina last November.

For Ekong, who was also born in Harlem, same as Ebuehi, he represented the Netherlands at U-19 and U-20 levels before deciding for Nigeria in 2015.

If this happens, then that would really be a true ‘Oyibo Wall’ line of defence for the Super Eagles. Players born in the diaspora have always had inroads into the national team, starting with Tunji Banjo. Many would consider John Orlando and John Chidozie in this group but Orlando was born in Ghana while Chidozie was actually born in Owerri before leaving Nigeria aged four.

Osaze Odemwingie also falls into that category but though he was born abroad, his family relocated to Nigeria and he actually spent some time with Bendel insurance. Odemwingie, it must be said integrated completely with the national team and had seven successful years with the team, attending two World Cups – 2010 and 2014, and he scored against Bosnia at the 2014 edition.

The emphasis on overseas-developed players is always at a premium with foreign coaches. Otto Gloria brought in Chidozie while Clemens Westerhof brought in Agboola. The situation has escalated with the regime of Gernot Rohr under Amaju Pinnick, the current president of the Nigeria Football Federation.

The likes of Ebuehi, Balogun, Troost-Ekong, Idowu, and Iwobi were born and raised outside the country but decided to play for their parents’ place of birth because, in actual political terminology, these are foreigners. In a piece in the Financial Times on June 5, the Moroccan team to the 2018 World Cup was revealed to be almost 65% foreign-born and raised outside Morocco.

What does this continuing phenomenon mean for the various local leagues, especially African ones? Extinction, if they do not brace up and improve the education and facilities to teach players under five the rudiments of the game.

Declaring victory in Congo’s Ebola epidemic too early – WHO