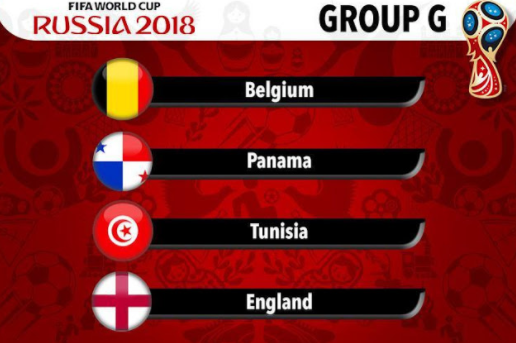 The group looks like one that will be easily predictable with many readily picking Belgium and England to progress.

Belgium became one of the first UEFA team to qualify for Russia 2018 with nine wins and a draw. With their plethora of stars, The Red Devils had a goal difference of 37. Reaching the semifinals for this group would be an achievement and they have the personnel to deliver, at least on paper.

Conclusion: Roberto Martinez has the job of forging a team of the wealth of talent without upsetting the balance. The only issue they may battle with is the defense, With a brittle Vincent Kompany marshalling the back. If the front men can however be clinical and consistent, the defence may not have too much to do.

Panama gets the opportunity to feature in its first World Cup after qualifying ahead of the likes of USA and Honduras. An 88th minute winner in qualifying against Costa Rica ensured they made it to Russia ensuring that Coach Hernan Dario Gomez becomes only the fourth coach to take three teams to the World Cup

Conclusion: Getting out of this group is highly unlikely for Panama. They will need to overcome the talent and experience of Belgium and England.

Tunisia were unbeaten in qualifying, making a comeback to the World football stage after a 12-year hiatus. They made have never made it past the group stage in their last five outings and it’s not looking likely, at least on paper.

Conclusion: Starting brightly against England in their first game is essential if the North Africans will have a chance of making it beyond the group stage.

Expectations are not so high for this England team, as the Three Lions have embarrassed in recent times. They booted out of the 2014 World Cup in the group stage, while debutants and underdogs, Iceland ended their Euro 2016 journey in the Round of 16.

Conclusion: Coach Southgate has picked a relatively young team mixed with experience and talent. England can hope to at least make it out of the group stage if they have what it takes to contain the underdogs, that is Tunisia and Panama.

Why we are against Falz’s song — MURIC

Why I stopped Femi Adesina from replying Obasanjo’s letter — Buhari