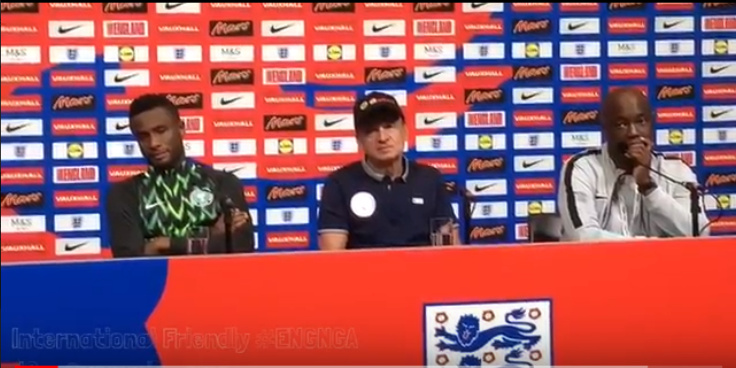 Mikel and Rohr during press conference

The Super Eagles coach, Gernot Rohr, as well as the country’s national team captain, John Obi Mikel, have both shared their thoughts on the 2-1 defeat suffered against England on Saturday at Wembley.

In their post-match submissions, Rohr and Mikel agreed that the Eagles played poorly in the first half and only got their acts right together in the second half.

Mikel noted that the tactics adopted by the Three Lions clipped their wing in the first half and things only got better in the second half when Rohr also changed the formation to suit what the home team brought to the table.

On his part, Rohr said there was a lot learnt from Saturday’s game and it also afforded him the chance to get fresher perspective on the players.

“This game shows we still have a lot of work to do to be ready for the World Cup. We have to make the best use of the two weeks left before our first game in Russia. It’s time to focus. No distractions.”

The Super Eagles are off to Austria from London where they would cross their tees and dot the I’s before heading to Russia.

The team will be facing the Czech Republic in their final test game.