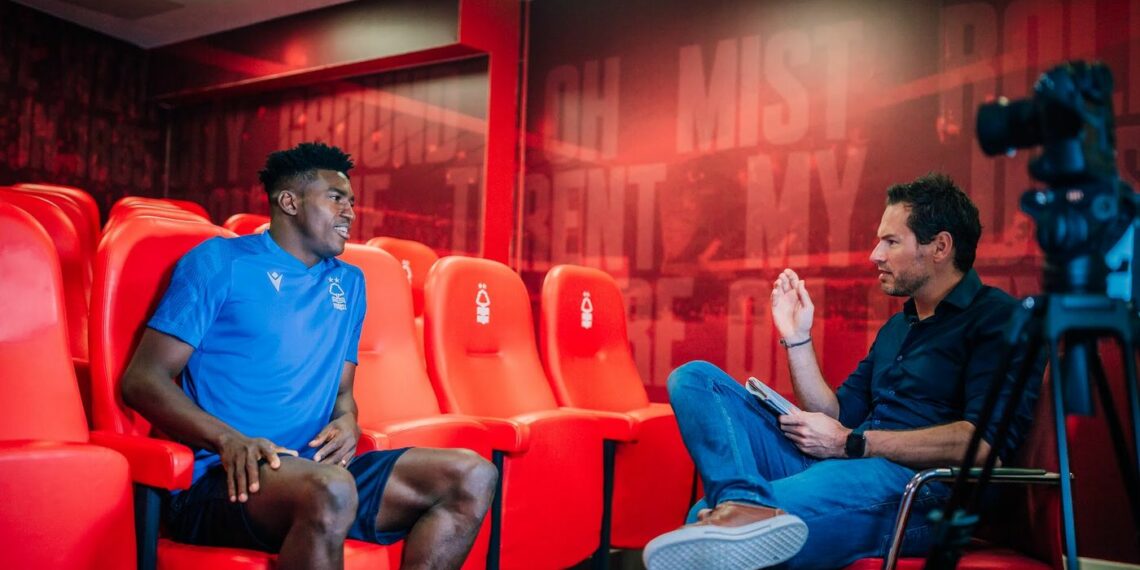 Taiwo Awoniyi waited almost six years for the chance to strut his stuff in the English Premier League. He may have thought his chance had passed when Jurgen Klopp cut ties in 2021 as the Reds sold him to Bundesliga side Union Berlin for about $9 million-a record buy for the German side.

On Saturday, June 25, 2022, Awoniyi fulfilled his dream as he signed for the newly promoted but historical Nottingham Forest side. The video of his signing showed a clearly thankful Awoniyi bowed before putting his signature on the $21.6 million contract-another record buy in the 24-year-old’s European sojourn.

On signing the dotted lines, Awoniyi said, “It’s always been my dream to play in the Premier League, and having spoken to Steve Cooper about our ambitions and looking at Forest, with its great history, it’s a club that I want to be part of.”

The 24-year-old signed for Liverpool in 2015 for about $1.1 million from Imperial Academy in Nigeria but all the feel he had of the English game were five-a-side games and drills at the old Liverpool training ground at Melwood and then at the new AXA Training Centre. He looked like it but Klopp had a formidable front three of Mohamed Salah, Roberto Firmino, and Sadio Mane and backup that included Divock Origi. Therefore, Awoniyi had to find a new home.

Awoniyi joins former strike partner, Kelechi Iheanacho, with whom he won the 2013 FIFA U-17 title, in the Premier League. While Iheanacho came straight to England, Awoniyi’s route has been a circuitous one but now he is here, he will hope to help Forest cement their stay in England’s top tier for many years to come.

He covered roughly 3187 Km for his Premier League dream to be fulfilled. FSV Frankfurt in Germany was his first destination away from Liverpool in 2015, from there he went to the Dutch side NEC Nijmegen in 2016.

He hopped across the border to join up with Excel Mouscron in 2017 and then swapped them for KAA Gent. The Gent experiment did not work as planned and he re-joined Mouscron in January 2019. FSV Mainz was the next step in his progression in August 2019. Finally, he landed at Union Berlin in September 2020, where his loan deal became permanent in June 2021.

Durability – The Premier League is famed for being a physically jarring experience, especially for players coming in new and that could lead to many injuries and absences. Awoniyi has the physical preparation because he has played in Belgium and Germany, two European leagues that are known for their physicality.

Last season, Awoniyi missed just three Bundesliga matches, even though he appeared for Nigeria at the Nations Cup in January. Since he moved to Europe in 2015, he has three injury records and the longest he has ever been out of action was with a torn muscle bundle in February 2021.

Breakaway goals – Cooper’s Forest team is a fast team, especially in counter-attacking – a style they may have to rely on to get a stable footing in the early weeks of the 2022/23 season.

With both Brennan Johnson and James Garner as his probable striker partners, Forest have quick-footed players in the guise of Awoniyi’s former Union Berlin teammate Sheraldo Becker. Of his 15 Bundesliga goals, he scored 13 in the box, though none came through headers.

Deadly when comfortable – Awoniyi has improved through the years, especially in places he has found a ‘home’. The lanky forward loved his time at Excel Mouscron in Belgium and promptly supplied 20 goals in 45 appearances.

At Union Berlin, he scored five goals in 21 appearances on loan and then exploded for 15 in 31 after his permanent transfer from Liverpool. It also means this season could be bedding in for the four-cap Super Eagles’ forward but he will score goals, especially if they hand him the responsibility from the off.

Humility and pedigree – Awoniyi has variously been described as humble and easy-going and Union Berlin’s director of sport Oliver Ruhnert said as much to Deutsche Welle. “Both as a player and as a human being, he will be a big loss for our team.”

Awoniyi is willing to put in the hard work and maintain a teachable spirit, which will be a tremendous bonus for Cooper’s side.

The Nigerian has a greater pedigree compared to many in the present Forest squad. Awoniyi has won a U-17 World Cup and has been successful in the Bundesliga, a top-five European league.

Andy Brassell told Sky Sports, “You look at his strength and the variety of goals he scores, and he was the man who made sure they qualified for the Europa League at the end of the season. He’s someone who can create his own shot and pick up the pieces.

And his new manager Cooper believes Awoniyi has all the attributes to get the goals that will help Forest stay in the Premier League. “He’s a player who we really believe in and we look forward to him going on to fulfil his potential and become a top Premier League striker with Nottingham Forest.”

“What really impressed me about him is his really creative strike partner did a lot for him – Max Kruse,” Brassel continued. He moved on and went back to Wolfsburg in January, and Awoniyi took centre stage and is happy to really take responsibility for the attack.”

In his first interview, Awoniyi revealed he joined Forest after seeing the passion of his new manager. “For me, it’s always about hard work, dedication, and believing in God. When I look back at the games with Union Berlin, it was always about the team for me.

“When I look at Forest and look at the history of the club, it’s even more about the team. This is the kind of place I love to belong to and I am ready for it.

“Every striker wants to score goals, but I’m ready to work for the team, to fight for every ball, to win every challenge. That’s my style, and that’s what I’m here for.”