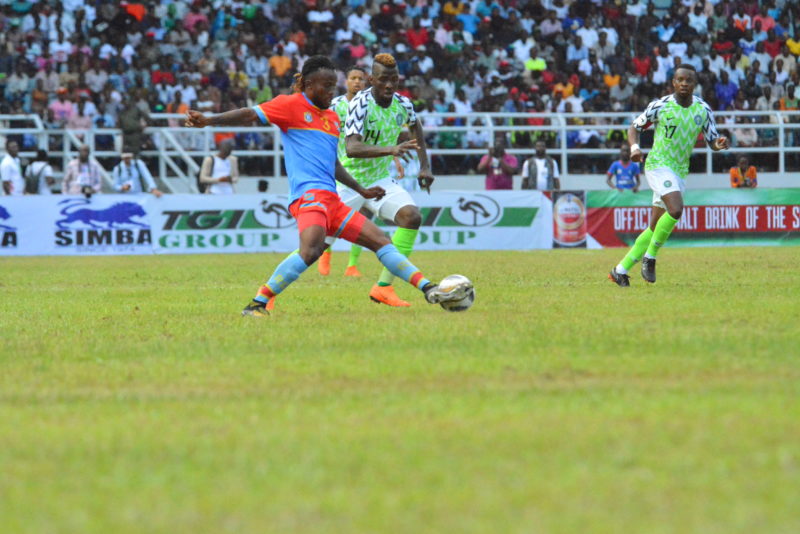 Photo from the International Friendly match between Nigeria and DR Congo on Monday, May 28, 2018.

The Super Eagles were forced to a 1-1 draw by the Simba of DR Congo on Monday. Many would have wished that Gernot Rohr’s men signed off from the country with a win but that was not the case. The bumpy pitch at the Adokie Amasiemaka Stadium did not also help the cause of the Eagles.

PREMIUM TIMES makes an independent assessment of how the Eagles fared in Monday’s friendly in the Garden City. They are also graded on a scale of 10.

Francis Uzoho 8 (Man of the Match)

Though many have already tipped the youngster to be one of the three goalies going to Russia, the 19-year old looks to have sealed his place as first choice among the shot-stoppers in the pool.

Uzoho gave a commanding display on Monday with a series of big saves to stake a big claim for the No 1 shirt at the World Cup.

Indeed, the Deportivo La Coruna youngster has justified Rohr’s confidence in him.

Some may have their reservations about the ex-Monaco defender, but his experience will still count for something if included in the final shortlist of players for Russia 2018.

As always, Elderson was adventurous going forward in Monday’s friendly and he was also booked for a reckless challenge against an opponent.

The new Benfica signing was quite smart and quick. He had a couple of well-timed interceptions.

On a better surface like obtainable in Russia, he should be very useful for the Eagles.

It is hoped the injury which forced him out is not anything serious.

He was quite brilliant in the defence and would be glad to score his first goal for the Eagles.

He is indeed looking ready for the test games against England and The Czech Republic and most importantly the World Cup itself.

Though above average, it wasn’t the best of performance for the new Brighton signing who actually told PREMIUM TIMES that the Eagles were already tired going into the game but promised better showings going forward.

He was the captain on the night but didn’t inspire much confidence as he looked ‘heavy’ and was not decisive.

As always, the former Lazio star was quite combative against the highly physical Congo DR team but would need an improved performance at the World Cup.

Not still assured of a place in the squad, the Torino star did not do enough to stamp his feet even though he looked good in the early exchanges

He had a poor first half with many misplaced passes in midfield. He did redeem himself a bit in the second half but largely had an average performance.

Though the NPFL top goal-banger could not score on his debut, he had a decent maiden appearance for the national team.

However, it does not look like the Kano Pillars star has done enough to jump the queue for a spot to Russia.

The Leicester City forward was far from his usual best on the night, though he showed some touches of brilliance on very few occasions.

His prompt substitution just before the second half was justified.

He could have gotten a goal to his name three minutes into the game. Though that did not happen, the Crotone forward is a good addition to the Eagles and having got satisfactory comments from Rohr, the dangling striker may have sealed a spot in Nigeria’s 23-man team to Russia.

The Arsenal man did try his bit, but one major drawback was his final ball which still needs more polishing.

The Chelsea defender was not looking like a good back up in the left side and he gave away the penalty from which DRC drew level.

If judged solely on his show in Port Harcourt, it will be a major surprise if he eventually makes the final cut. But Aina is better than what he showed against Congo DR, maybe another second chance against England will come good.

He came on for the injured Ebuehi but perhaps his mindset was not against Congo DR so he was just average on the night.

He did add some urgency to the frontline with his blistering pace but what he also needs is to improve on his final ball.

He was quite solid when he replaced Balogun. He remains though third in the pecking order of central defenders in the squad.

Not assuring in any bit in Monday’s friendly though he has had better performances in an Eagles shirt. His lack of pace is one of his major drawbacks