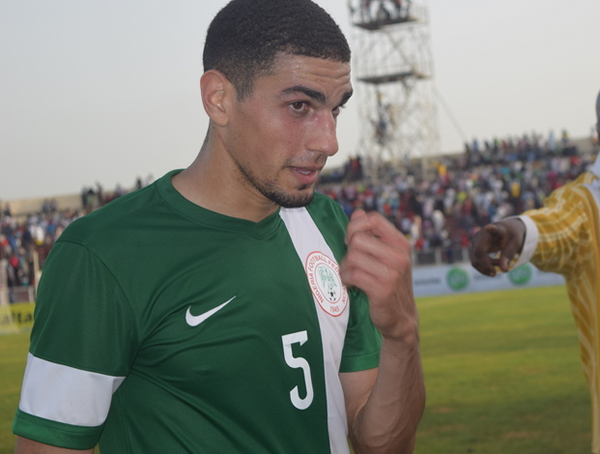 Leon Balogun and William Troost-Ekong are two Super Eagles nicknamed the ‘Oyibo’ Wall by fans of the Super Eagles because of their mixed races, and understanding and panache which they have brought to bear on the defence of the national team.

Both, barring any unforeseen circumstances will strut their stuff in the Eagles’ starting XI at the 2018 World Cup, scheduled to kick off in Russia on June 14.

Balogun sat down with Deuchewelle’s Kres Harrington to discuss all things football, especially the World Cup.

When asked why Nigeria, Balogun said, “First of all, I have to say – in Germany, they have a lot of great footballers. By the time when I might have the chance to come into that team…there were a lot of players who were ahead of me,” he truthfully stated.

He revealed that some news reports in Nigeria brought him to the attention of the then Super Eagles manager, the late Stephen Keshi, who gave him a call.

“I picked up the phone – ‘Hello Balogun, do you know who this is? To which he replied no sir, who is this. Stephen Keshi, how are you my son and I was like, wow, it is about to go down.”

Balogun was subsequently called up for the friendly matches leading to the Brazil 2014 World Cup but in his very first match, against Mexico, he broke his foot.

“I was subbed in and I broke my foot after 20 minutes. That is why I missed the World Cup in 2014 and that is why it is now even more special,” he said.

Balogun will turn 30 in June and is also out of contract at Bundesliga side, Mainz.

When he was told he would be going up against Argentina’s Lionel Messi, he jokingly asked, “Who is that?”

“We as Nigerians – as the Super Eagles, we deserve this chance. It could have been different teams playing against us in our group but it is Argentina again though we just beat them without Messi.

“Nigeria has shown – I believe we were the first team who qualified from Africa, so we proved our great quality, especially as a team.”

Just like many observers have noted, Balogun revealed that the team spirit is very high and hopes they can replicate this in Russia, with which they would have a greater chance of making it to the second round.

With just months to the start of the Mundial, Balogun still believes it is all a dream.

“I still don’t believe this is happening. I mean it is getting closer but I will only realise once I am in Russia, preparing, probably walking into the stadium – the pitch, listening to the national anthem – realising now that the whole world is watching us.”

“Immediately we qualified against Zambia, I just broke down in tears because it meant so much to me. It is a childhood dream. This means I can really compete against the best,” Balogun exclaimed.

On a closing note, Balogun thinks the Super Eagles can be the surprise package in Russia. “We could be a big surprise.

“I think we have some attackers, some quality in our offense especially that most of the teams might not be aware of.

“So, I hope they are not going to get a wake-up call before we gonna wake them up in the game by which time it will be too late for them.”

The Super Eagles start their World Cup quest against Croatia at the Kaliningrad Stadium on June 16.