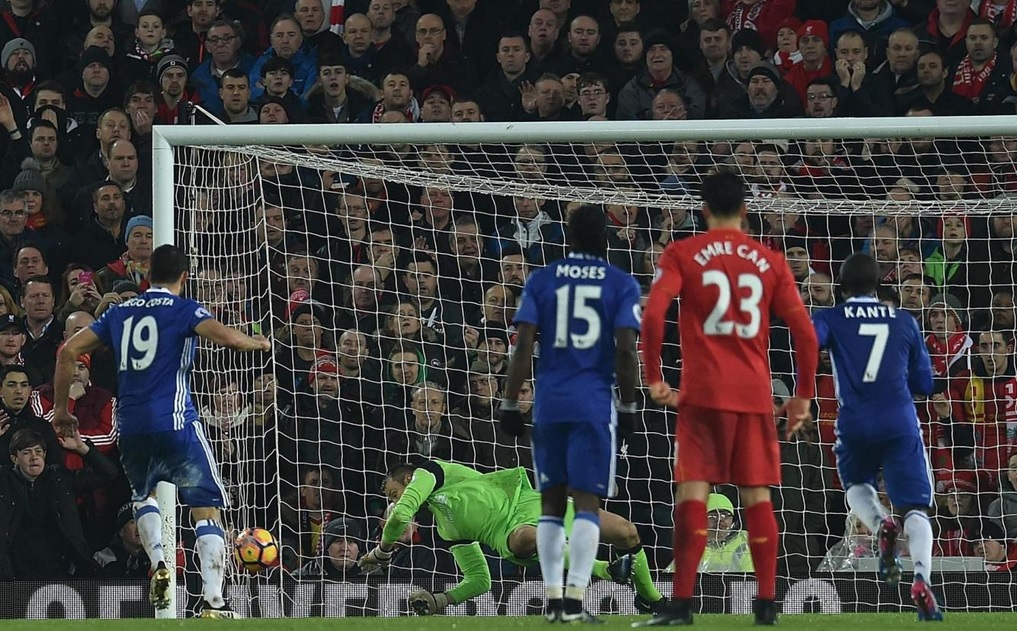 It was a must-win match for Jurgen Klopp but Antonio Conte got the point his match tactics wrought at Anfield.

David Luiz scored from a quick free kick – his first goal since his comeback from PSG and Giorgino Wijnaldum headed Liverpool back into the game in the 57th minute.

Chelsea had a chance to take all three points but the forward then missed a penalty he won off Joel Matip.

But with other results, –Arsenal lost 2-1 at home to Watford while Tottenham were held away at the Stadium of Light by Sunderland — it means that Chelsea extended their lead atop the table to nine points from second-placed Tottenham.

Liverpool started like a house on fire and had over 100 touches compared to below 30 for the league leaders and they got their first corner kick in the third minute, which was easily cleared.

Conte’s men were afforded a breather on five minutes as referee Mark Clattenberg paused proceedings when there was a clash of heads between Marcos Alonso and Adam Lallana.

Thibaut Courtois had the first shot to save on 11 minutes as Giorgino Wijnaldum let fly from outside the box but well parried for a corner. Clattenberg was then needed at the sidelines to calm things between Klopp and Conte.

After the frenetic start by Liverpool, Chelsea got on the ball through Eden Hazard, who fed Victor Moses. Moses drove into the box but his shot was deflected for a corner kick.

Then came the Chelsea goal. Clattenberg called an innocuous challenge on Hazard by Lallana a foul in the 23rd minute. Simon Mignolet was then left totally flummoxed by David Luiz’s quickly taken kick. Willian seemed surprised also s the ball went off the right post to nestle in the net.

Totally against the run of play but a result for the counter-attacking set-up by the Italian gaffer.

The second half started the same as the first with Liverpool all guns blazing and they got their reward 12 minutes when Wijnaldum got on a ball that came off Moses’ head. But it could all have been different if Moses’ shot had beaten Mignolet instead of hitting the upright.

Conte took off Hazard, replaced by Pedro as Conte sought more possession of the ball.

In the 75th minute, Costa then won a penalty from the faintest touch by Joel Matip. Clattenberg awarded the kick and with Hazard off the pitch, Costa’s kick was well saved by Mignolet.

Jordan Henderson then produced a faultless tackle on Pedro on the penalty spot to save Klopp’s blushes.

Firmino then had the last chance to win the game for the Reds but with the goal gaping – he headed straight at Courtois.

Good point for both teams as Klopp and the Reds stopped the run of three consecutive home losses.