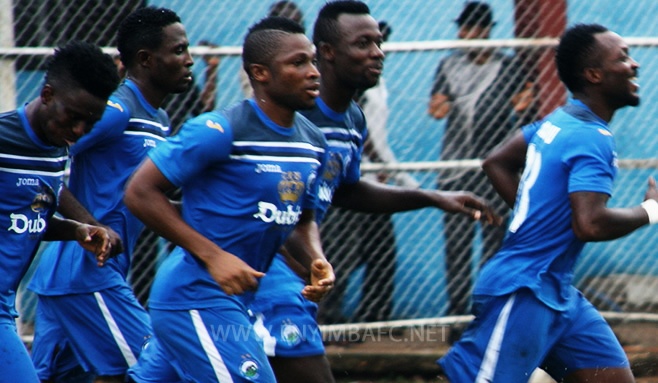 The Nigeria Professional Football League is down to 180 minutes but six-time champions are just one point away from a historic seventh title, the All Blacks made history at Twickenham while Hingis continues to grab double tennis titles.

Enyimba just one point away from 7th title

It was fitting that Mfon Udoh came off the bench to score the winner against Abia Warriors on Sunday. He left Kadiri Ikhana with the simple task of picking just one point from the team’s last two matches – one at home to Warri Wolves and the last away to Sunshine Stars. Udoh, last season’s top scorer who had scored just twice this season, finally came good on Sunday with his third league goal.

Hingis and Mirza win 22 matches in a row

Martina Hingis and Sania Mirza extended their monster winning streak to 22 matches to win the BNP Paribas WTA Finals in Singapore on Sunday. And so, Hingis and Mirza’s winning streak – which has brought them back-to-back-to-back-to-back titles at the US Open, Guangzhou, Wuhan and Beijing. It also meant that Hingis claimed a 50th career WTA title. She is only the 16th woman to get to this milestone.

The New Zealand national rugby team – the All Blacks are world champions once again – but this time it is a record, as they became the first country to successfully defend the title when they defeated Australia 34-17 at Twickenham on Saturday.

The final lived up to its expectations and was played in front of a packed Twickenham with Prince William and Prince Philip. Prince William did the honours by presenting the gold trophy to the triumphant team.

After 10 straight wins for a Bundesliga record, almighty Bayern Munich were stopped in their tracks by Eintracht Frankfurt on Saturday as they prevented the Bavarians from scoring in the league for the first time since May, when Augsburg denied them with a 1-0 win. This time a 0-0 sufficed.

Stanley Biwott and Mary Keitany were the Kenyans on the podium on Sunday as they claimed the men and women’s New York City Marathon.

Biwott claimed the most important win of his career after coming fourth in London earlier in the year. He thus became the 11th different Kenyan to win the New York race.

The name does not initially ring a bell but Leicester City’s Jaime Vardy, on Saturday equalled the record for consecutive goals in the Barclays Premier League, when he scored for an eighth consecutive match away at West Brom to equal the feat performed by Daniel Sturridge and Ruud van Nistelrooy. And that goal was the winner for Claudio Rainieri’s side, who against all expectations climbed to third on the table.

At the weigh-in last Friday, Joseph Lamptey disrespected Nigeria by manhandling the flag but after a thorough beating from Larry Ekundayo, Lamptey collected the Nigerian flag and waved it to the crowd at the York Hall in London. Talk about getting some sense punched into your head.