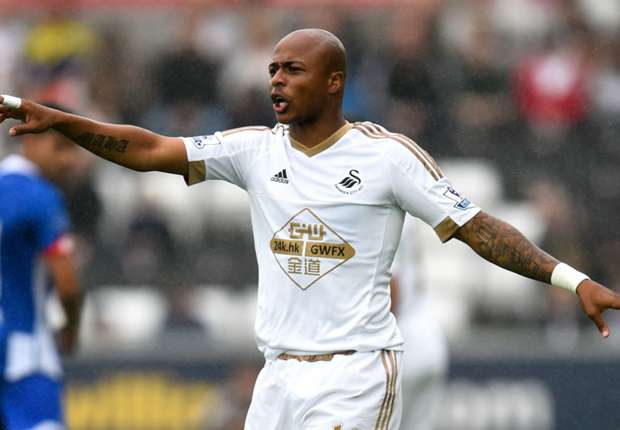 It was a week of drama – from the English Premiership to the MotoGP and Formula 1 circuits. Jose Mourinho got himself sent off during half time, Dede Ayew and Jordan Ayew scored in the same match…But here are seven events that caught our eye last weekend.

It could easily have been a big celebration for Jordan Ayew as he scored his first goal for Aston Villa on Saturday, but his brother, Dede, popped up three minutes from time to score the winner for Swansea. Twenty fours after that defeat, the Villa board decided that enough was enough and Sherwood was given his marching orders. Sherwood’s reign at Villa Park lasted just nine months.

New Zealand’s Lydia Ko has reclaimed the world number one spot after winning the LPGA Taiwan Championship. The 18-year-old Ko hit a final round seven-under 65 as she coasted to victory by nine shots to overtake South Korean Inbee Park, who did not play the tournament. She also became the youngest player to earn 10 wins on the LPGA Tour.

Marc Marquez claimed that grid leader, Valentino Rossi kicked out at him when they collided in MotoGP’s Malaysian Grand Prix on Sunday. Rossi was handed three penalty points for the clash, which means he will start the championship-deciding final round at Valencia from the back of the grid.

Pep Guardiola’s side earned the 10th consecutive Bundesliga victory of the season on Saturday with a dominant 4-0 win over Koln to join the likes of Tottenham [1960], Manchester United [1985] and recently, Roma in 2013 who were the elite three before Bayern joined them on Saturday. They also became the first side to clock 1000 wins in the Bundesliga. The Bavarians have scored 33 goals and conceded just four so far this season.

After many rain delays, Lewis Hamilton claimed a consecutive Formula 1 title and a third overall as he won the US Grand Prix in Austin with three races still left on the calendar.

The 30-year-old Briton also became the first British driver to win back-to-back championships and afterwards he said, “It’s the greatest moment of my life. Thank you guys so much, for everything you do. I’m so grateful. To my family, I love you all, thank you.”

There were hat-tricks across Europe

Harry Kane scored a hat-trick for Tottenham against Bournemouth; Luis Suarez scored a hat-trick against Eibar; Pierre-Emerick Aubameyang scored two hatricks in three days – first in the Europa League against Qabala and then in the Bundesliga on Sunday against Augsburg. But the pick of the pack was the hat-trick scored by 35-year-old dirk Kuyt for Feyenoord against AZ.