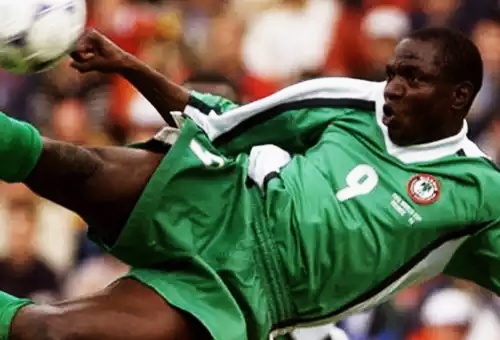 Dahiru Saadi is the President of Nigerian players union, APFON. Many regard the Kaduna-based ex-international as one of the best midfielders that ever played for the Super Eagles. In this interview with Tunde Eludini, Mr. Sadi recalls the rivalry between him and the late soccer legend, Rashidi Yekini.

PT: What do you remember about your active footballing years and your relationship with Late Rashidi Yekini?

Sadi: When I look back to the years I played football, I feel fulfilled in that I achieved my dreams. My dream when I was younger was to play for Nigeria at the highest level. I remember then when Christian Chukwu and co came to Kaduna to play back then, we were ball boys, me and Rashidi Yekini. When we saw the match, we made a bet there and then as we were doing our duty to see who would be the first between us to play for Nigeria. So when I played for the U20, I told him I had won the bet and he said no that was not the real deal but you know that very year we were promoted from the Flying Eagles to Super Eagles. That was when he joined us in the senior team and we achieved our dream.

PT : What was the driving force back then?

Sadi: Then, there was a lot of determination and self-discipline to achieve our goals. If you watch one team or a player then, you will determine in your mind that I can play better and go ahead and begin to practice. But nowadays people are more interested in money, so the follow the money.

PT: How do you remember Rashidi Yekini?

Sadi: I knew Rashidi Yekini for a long time, we grew up in the same area. He was a childhood friend. In fact it was like a competition between us at that time. We were in the same area but played for rival local teams. From there, I went to Ranchers Bees and he went to Kaduna United (UNTL) but after doing our duty we came to sleep in the same house. We were always trying to outdo each other but it was a healthy competition. He was a good friend, you know. In the national team, he was usually my roommate.

PT: What would you say is the difference between Sadi and the current crop of midfielders?

Sadi: I will put that in two categories: one, the talent and if you have a good coach. I would say I was lucky to have Coach Christopher Odumezu, who taught me the rudiments of football early on. I cannot forget him. That was the luck I had. In football, as a midfielder what you need is your first control, if you cannot have that first control, I think you are not yet there. Once you have that control, it makes you think faster than your opponent who does not know what is going on in your mind.

We may not be able to compare the likes to John Mikel Obi to people like me or Jay Jay Okocha because the type of football played now is different from what was played during our time. In his own class, he is good because you have to have tactical discipline in your area to be able to play football these days and he has that being able to play to the coach’s instructions. Sometimes you will notice that at Chelsea, he is usually brought in during their difficult games to do some cleanup work for them and he has been doing it consistently. For me in terms of modern football, he is very good.

PT: Would you have preferred to be playing now or back then?

Sadi: People were always saying that in our days, there was no money but let me tell you, there was money. During my time at Abiola, before I left to play professional football, I bought a very nice house in a good area for N19, 000. You could afford a shirt of N1, 000 then. The only difference now is the fame and limelight that football thrust them into these days. Now you cannot hide anything but those days, there was a bit more privacy.

I captained Abiola Babes before I left for Europe. MKO Abiola treated the players in the club well. There was not a more professional place than the club especially in terms of players’ welfare and the way the club was run. The players’ welfare was in the forefront. We went for medical checkups in Germany, you were flown to Germany in the mid-season if you had any injuries, so it was even more than travelling by air to honour local away matches.

PT: As the APFON boss what did you do as regards the controversial death of Rashidi Yekini?

Sadi: The players’ union are trying to do something, let me correct that notion here. But the issue and situation surrounding his death is in the court already and once something is in court, it put things on hold until after the court case has been resolved. I was privileged to be in a meeting with the Nigerian Football Federation and they are also planning to honour the legend but they need to do the needful as fast as possible.

JTF in talks with Shell, Bayelsa communities over closure of flow station