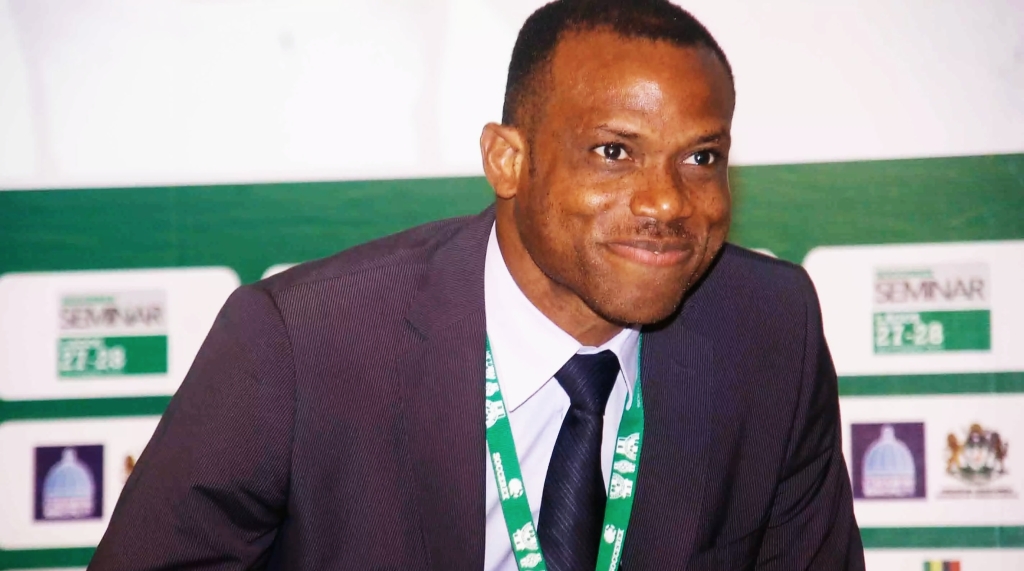 From all indications, the Nigeria Football Federation will name Sunday Oliseh the next Super Eagles coach.

The ex-Ajax and Juventus midfielder will always be fondly remembered for that match-winning thunderbolt goal against Spain.

It was at the 1998 World Cup and Andoni Zubizareta, La Furia Roja’s legendary goalkeeper will remember the match with pain as Nigeria came from behind twice before Oliseh’s goal sealed a 3-2 victory.

The Nigeria Football Federation revealed on Wednesday that its president, Amaju Pinnick, met with Oliseh in London to set up a contract.

“An offer has been made, and there is understanding, but we have to work out the final details of the agreement in a few days,” the NFF wrote.

Oliseh did not ‘chase’ the job

Oliseh has publicly scoffed at the job but Pinnick met with him on Wednesday, after a previous meeting in November 2014, to finalise plans for his unveiling.

As part of the proposal, “Oliseh is expected to come up with a five–year developmental plan to fashion a unique playing and coaching philosophy.”

Well, there we have it.

The question that many who have heard Oliseh speak in the years gone by will be asking now is: “Why did he change his mind concerning the national team job and why now?”

Oliseh, in January 2015, at a TED lecture, revealed that so many people have asked him why he does not want to coach the Super Eagles and his reply has always been, “I wanna live long.”

So what changed between January and July? It may be that he has decided that it is better to live a short impactful life than one that is long but with a lot of regrets.

Oliseh prides himself as an analyst

Another question that quickly follows is, will he be able to solve the tactical and technical void that the Super Eagles have been bereft of in the last couple of years?

In that same lecture, Oliseh said: “Education from my school days was the difference in my life. It made it easy for me to analyse.”

An analysis of the challenges that face the growth of the game in Nigeria will show they are numerous. Worse still, the challenges have now gone ‘viral’.

Oliseh revealed in one of his interviews that what happens in the football house is ‘organised chaos’. “If things are done properly – in the right way, there will be no avenue for corruption.”

So, as an analytical person, has he found a way to negate this ‘organised chaos’ that he will definitely encounter on the job?

Yes, he has a UEFA Pro license, and he was in the same class with Manchester United legend, Ole Gunnar Solskjaer, but has that prepared him for the unpredictability of his employers and is that enough to guarantee success in the Super Eagles job?

“This change in the way the NFF went about their business reflects a growing if so far largely unacknowledged trend with this current leadership.”

The NFF say they are ready to help him succeed

“A lot of the work being done has been geared toward long-term capacity building and improvement of structures,” Udoh wrote on espnsoccernet.com.

And the NFF are actually making all the right noises about implementing a plan for long-term gains.

So Oliseh should be backed to the hilt to succeed as summarised in Shehu Dikko’s comment, “He [Oliseh] will receive every bit of support he needs to make this work, because if he fails, we all fail.”

At this moment Oliseh must believe this statement that he made at the TED lecture so hard that he could damn all the consequences. “If we decide as a race that we want to succeed, nobody can stop us.”

Nobody can stop him but what the average Nigerian football fan desires for the Super Eagles and all the national teams is success by playing a fine brand of football.

Whether Oliseh, in his new capacity, will be able to deliver this is another matter. If he does, it might well be that the ‘change’ Nigerians seek in all spheres would also be visiting the football house.