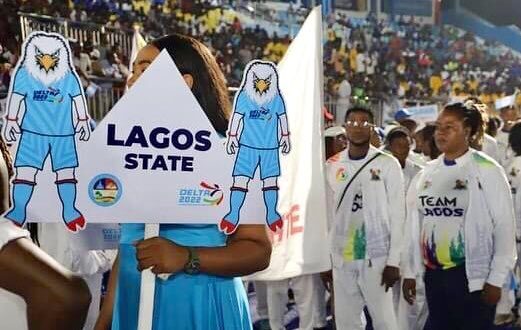 In the early match of the day, the Lagos Female team walked over Plateau while Oyo also did the same against Team Adamawa.

Teams Rivers, Lagos, Ondo, Cross River, Kwara, Oyo on Thursday, qualified for the round of 16 of the Teams event of the Table Tennis at the ongoing 21st National Sports Festival in Asaba.

The News Agency of Nigeria (NAN) reports that the male and female categories of Table Tennis were played at the Indoor Sports hall of the Stephen Keshi Stadium, Asaba.

In the early match of the day, the Lagos Female team walked over Plateau while Oyo also walked over Team Adamawa.

The duo of Oku and Udoka, who spoke with NAN, expressed confidence to sail through to the finals of the female team event.

Udoka said she had a panicky start at the festival because she had not rested well after travelling for several hours by road to Asaba.

“I am so excited to win because I had a shaky start due to the fact that I was already tired after the long journey to Asaba.

“I am happy that I pick up my game and won over the course of the game,” she said.

Olu, however, said she did not expect a tough challenge from the Osun players, adding that she was glad that the victory came their way.