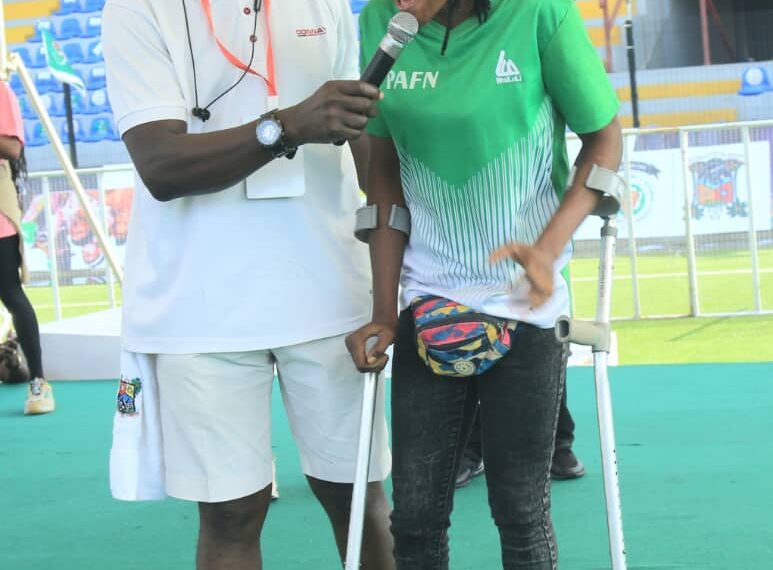 Goodness Nwachukwu at the event

In line with its mission statement to advance the course of women at all times, the organisers of the annual Lagos Women Run have offered cash and moral support to some of the country’s female special athletes.

At the seventh edition of the Lagos Women Run held on Saturday, some of the country’s Paralympians, especially those that took part at the last Commonwealth Games in Birmingham, were around to receive the special package put together for them.

Top on the list of those that were given cash awards by the organisers of the Lagos Women Run was Goodness Nwachukwu, who clinched the gold medal for Nigeria in women’s Discus F42-44/61-64 event

“This is a pleasant surprise for me and my other colleagues that have been honoured by the Lagos Women Run organisers. This show of love is very appreciated.

“I must confess, this is quite timely, and it shows that the Lagos Women Run organisers want the best for all, whether physically fit or physically challenged,” she stated.

Tayo Popoola, coordinator of the Lagos Women Run, explained that the gesture to the special athletes is one of the many ways the project is trying its best to support women from all walks of life.

“We have continually said the Lagos Women Run is beyond sports, and we will continue to do more in collaboration with our partners and sponsors,” Popoola assured.

“What we have given to these Special Athletes is a token to show we actually care about them. We hope it will help to augment their training and personal needs”

Maisaje Vera-Yohanna from Plateau State emerged the winner of the 2022 edition of the Lagos Women Run.

Included in the vast crowd of participants that greeted the seventh Lagos Women Run, there were several dignitaries also present, including Taiwo Akosile, who represented Her Excellency, Ibironke Sanwo-Olu.

Others are Elohor Aiboni, the first female managing director of Shell Nigeria Exploration and Production Company (SNEPCo), and Yemisi Tinubu, vice chairperson of Lagos State Athletics Association, among others.