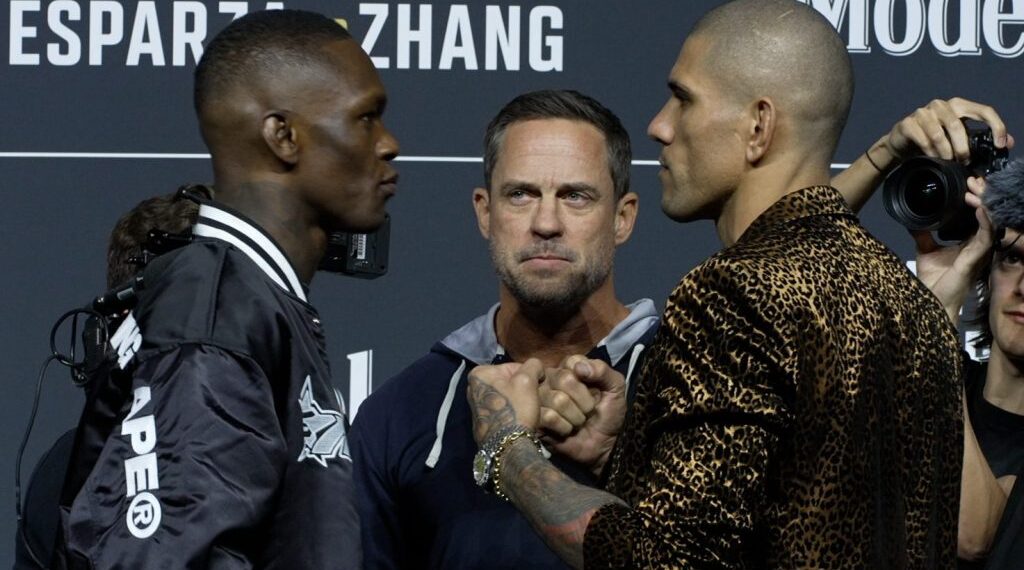 Israel Adesanya of Nigeria is one of the world’s most dangerous martial artists. Not only has the Stylebender competed in MMA, but he has also competed in professional boxing and professional kickboxing.

Adesanya has only been knocked out once in 108 professional fights in combat sports involving striking.

Guess who has that honour? Alex Pereira.

Pereira has fought Israel Adesanya twice and beaten the Nigerian twice. The last time they both met over at Glory Kickboxing was when the Brazilian became the first (and only) man to finish Izzy, knocking him out cold with a left hook in the third round and sending him scampering away from Kickboxing into MMA.

But Alex Pereira has followed him there and is now after Adesanya’s most prized possession, the UFC middleweight championship. Both fighters trod slightly varying paths to UFC title contention.

Many observers, especially in Adesanya’s team, therefore, believe that the former Glory Kickboxing middleweight champion hasn’t done enough to earn the opportunity. But then Adesanya has destroyed everyone else in the Top 5, some twice, so it’s an easy decision that the new contender should take precedence.

If you think you’ve seen grudge matches, this could be the grandfather of them all.

A former kickboxing two-division champion, Pereira, is an elite striker – one of the most dangerous in the world. He has a brutal left hook, the same one he knocked Adesanya out with, and the same one that ended his last fight against the fast-rising middleweight contender, Sean Strickland, in the first round.

He also has vicious kicks well expressed in the way he dispatched Andreas Michailidis with a flying knee in the second round of his first UFC fight.

But, despite losing twice to Pereira, none of his devastating skills intimidate Adesanya. When asked about the fight, the Last Stylebender quickly reminded everyone that this isn’t kickboxing, but a completely different sport called MMA.

While this might be true, it is important to still note that both fighters are predominantly kickboxers and will probably give us a strike fest. Israel has wrestling training alright, but it’s all mainly defensive wrestling to avoid being taken down and to get back up when he does. It will be surprising to see him attack with his wrestling. But then against a guy who had beaten you twice in kickboxing, maybe Izzy could try something different.

But more importantly, it is very good to see Adesanya treating the fight like the grudge match it is. Izzy has been more vicious and emphatic in a grudge match. His first fight versus Robert Whittaker was personal, and Adesanya produced a second-round knockout.

So also was his fight with the Brazilian Paulo Costa, which ended in another first-round knockout. Then there was the personal beef with Derek Brunson, which also ended in a first-round TKO for Adesanya.

But when he has been too friendly, like the fight with Romero, the second encounter with Whittaker, and his last fight against Garod Cannonier; all ended in decision wins.

The Last Stylebender said during media week that he is going to make this fight seem like a horror movie. There is fire and beef in him and his fans will be hoping he brings it into the cage on Sunday morning.