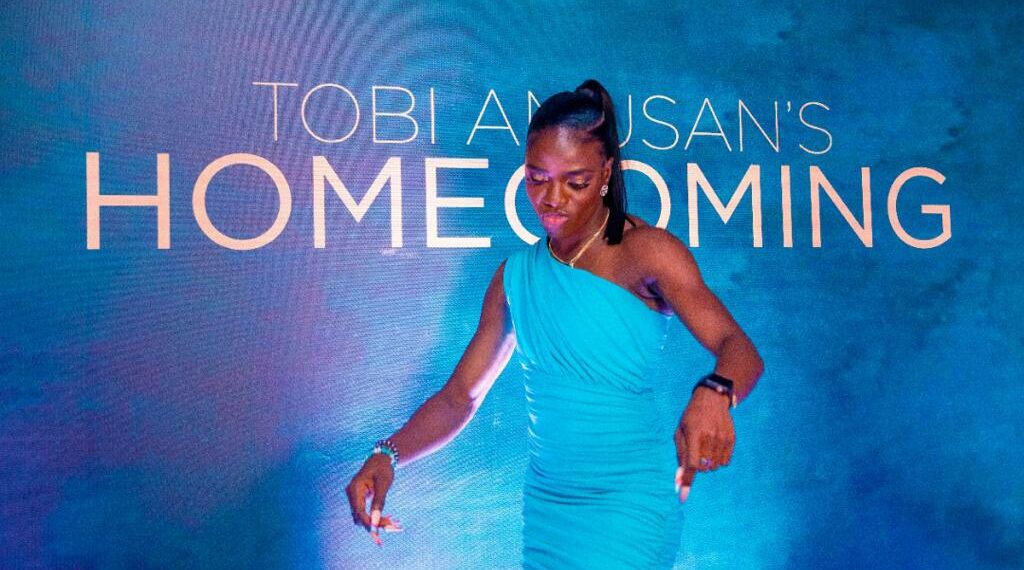 The athletics season is officially over but World 100m record holder Tobi Amusan has continued to hug the headlines for the right reasons.

From her arrival at the Murtala Muhammed International Airport a fortnight ago, till now, Amusan has been the beautiful bride of all: the media houses, the government, corporate bodies and all a sundry.

On Wednesday night in Lagos, Amusan was treated to a befitting Homecoming Dinner by her Sports management outfit, Plug Sports.

The well-attended dinner, which took place in Victoria Island, Lagos had in attendance guests from the entertainment industry, political figures, socialites and reporters alike.

There were also major appearances from Flutterwave, who signed a multi-year partnership with Amusan.

“It’s very difficult to find athletes who embody our core values the way Tobi does.” a representative of the company told reporters.

The World Athletics had on Tuesday ratified Amusan’s World Record of 12.12s (0.9) set at the World Championships after winning the gold medal in the women’s 100m hurdles at the 2022 Commonwealth games.

The current record held by Amusan was an improvement on the 12.20s, set by USA’s Kendra Harrison in London in 2016 and followed that with a wind-assisted 12.06 (2.5m/s) to dominate the final.

Speaking with reporters at the Lagos event, Amusan, who was elated with the reception and enthusiasm shown by the guests seeing her in their midst, said the ratification of her record by the World Athletics was a breath of fresh air, as she knew she already bagged the record but was happy to know that the milestone was now cast in stone.

“It’s a breath of fresh air for me and I’m still getting a hang of everything happening to me right now. My 200 million soldiers across Nigeria supported me through the World Championships, Commonwealth Games and the Diamond League, I trust them.

“As an athlete, I eat everything that I can, especially things that can give me energy,” Amusan said.

Speaking on the build-up to her historical moment in Oregon, Amusan said it didn’t come easy as it looked.

“Yes, definitely. I’ve got injuries a couple of times,” she said.

“There was so much I needed to do when it comes to my health as a professional athlete, and staying on top of my game required a lot of funding.”

Nigeria’s President, Muhammadu Buhari, recently conferred the Officer of the Niger (OON) national honour on Amusan following her exploits in the past three months.

“It’s a great feeling to be recognised by the president.

“In as much as we did the work, it was an honour that they realised that we did the nation proud and it was a great feeling getting that title,” she said.

Proudly, Amusan is a world champion, a world record holder in (12.12s), a Diamond League champion, an African champion, a Commonwealth champion, and a national champion, with 17 wins in 25 races in the just-ended athletics season.

Plug Sports, which currently manages Amusan, also have some other sports personalities in their stable, including Henry Onyekuru, Asisat Oshoala and Clement Ugah.