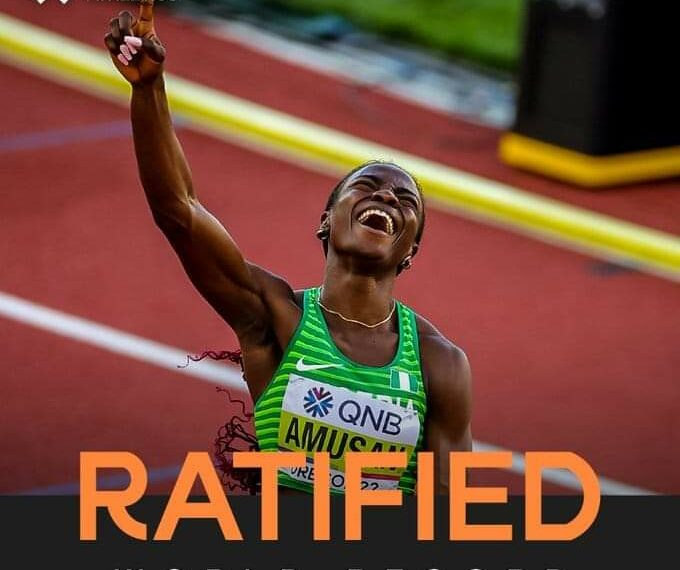 Nigeria’s Tobi Amusan has officially scaled the last hurdle in joining the exclusive list of legends in the athletics record books.

Amusan on 24 July shocked the world when she breezed to an astonishing winning time of 12.12s in her semi-final race at the World Championship in Oregon.

Almost two months after that race, World Athletics announced on Tuesday that Amusan’s record and three others have been ratified and are now in the record books.

The World Athletics made the cheering disclosure in a press statement on its official website.

“The world records set by Tobi Amusan, Mondo Duplantis and Sydney McLaughlin at the World Athletics Championships Oregon22 have been ratified.

Amusan had a glorious outing in Oregon where she first lowered the African record to 12.40 in the 100m hurdles heats.

The African record was a glimpse of what was to come from the 25-year-old Amusan who had already put the world on notice of what she was capable of something special.

Amusan still had more magic in her as she followed that remarkable performance with a wind-assisted 12.06 (2.5m/s) to win the final.

“The goal was to come out and to win this gold,” she said. “Honestly, I believe in my abilities, but I was not expecting a world record at these championships.”

To show all she did in Oregon wasn’t a fluke, Amusan went on to win the gold at the Commonwealth Games where she set another 12.30s Games record before capping her remarkable season by retaining the Diamond League crown.