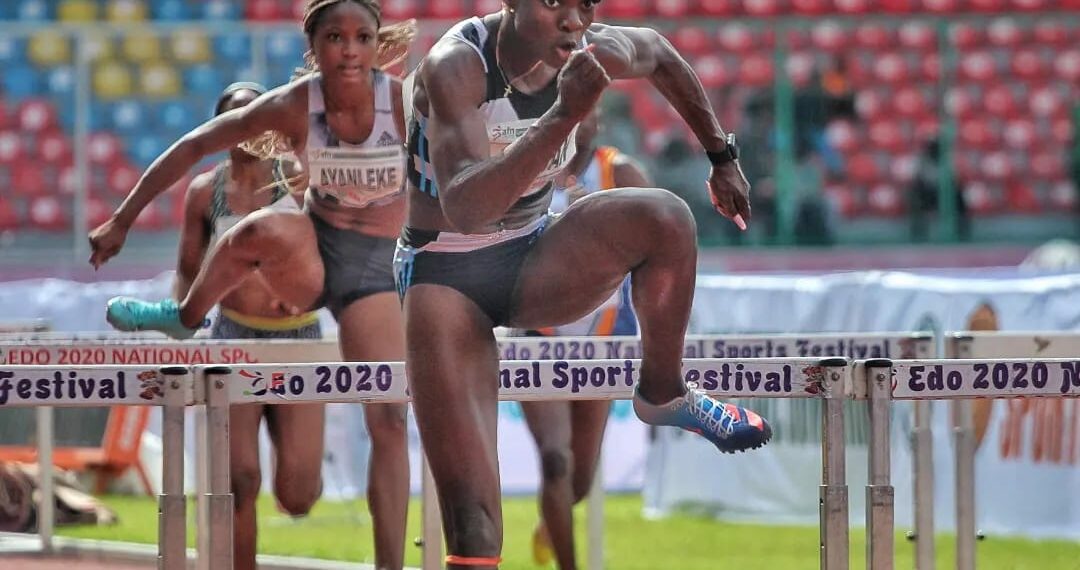 Amusan adds another record to her kitty in Benin City

The conclusion of the Nigeria athletics trials in Benin-City last weekend has led to an eagerness in awaiting the crack squad the Athletics Federation of Nigeria (AFN) will come up with for both the World Championships in Oregon and Commonwealth Games in Birmingham.

Fresh from hosting the National Sports Festival, the choice of the ancient city of Benin for what is the biggest event on the country’s athletics calendar was more than justified.

The tartan track and other equipment made available at the Samuel Ogbemudia Stadium in the city’s heart were a perfect match for the star athletes that thronged this year’s Nigeria athletics championship.

As customary with most track meets, the 2022 National trials, which are the first of its kind in Benin-City, served a mixture of upsets, disappointments, and also glowing moments that would linger for years to come.

Here is PREMIUM TIMES’ review of some of what transpired in Benin City during the national trials.

As change is the only constant thing in life and no matter how an athlete may have mastered his/her trade, there would always come a time of unseating, and sometimes we don’t see it coming.

We witnessed one of such moments in the Women’s Discus event where Obiageri Amaechi usurped the National Record (NR) holder Chioma Onyekwere to win her first National title.

After winning a bronze medal at the African Senior Championships in Mauritius, which was her first-ever outing for Nigeria, Amaechi needed a new lifetime best of 58.10m, to claim her first national title in her first attempt.

Onyekwere had to settle for the second position with a best throw of 57.33m, even as she acknowledges she has a new rival in 23-year-old Amaechi.

Both Onyekwere and Amaechi will hope for podium finishes at the Commonwealth Games just as they did in Mauritius; winning gold and bronze, respectively.

Rosemary Chukwuma, Grace Nwokocha, Tobi Amusan, and Tima Godbless dominated the women’s final after crossing the line in 43.44s and even when it was improved slightly to 43.42s, it was a far cry from what was required.

With the World Athletics’ cancellation of Nigeria’s 42.97s time recorded at Yabatech Sports Complex, Lagos, but because of Blessing Okagbare’s 11-year ban, Canada leapfrogged Nigeria to claim the last qualification spot for the event in Oregon.

The case was not any different for the 4x400m team whose best time of 3:30.40s in Benin puts them well outside the qualification region in the 21st position.

Aside from the uninspiring relay performances, the outright absence of one of the country’s best athletes at the moment, like Favour Ofili, was equally disappointing for many fans wanting to catch the glimpse of the Louisiana State University athlete.

Some posit Ofili’s presence could have boosted the Women’s 4x100m chances.

One of the biggest takeaways from Benin City will be the emergence of 20-year-old Favour Ashe as the country’s latest fastest man.

Ashe, with his feat in Benin, became the 12th man in Nigeria’s history to run sub-10 seconds in the 100m, clocking 9.99s to claim his first national title.

Aside from Deji Aliu and Uchenna Emedolu, no other Nigerian athlete has ever run as fast as Ashe on home soil.

Ashe is an NCAA silver medalist in the 100m and his win-aided 9.79s makes him the fastest ever Nigerian in history under all conditions.

For many, the future looks quite bright for Ashe, and we have to reiterate his humble beginning at Lagos-based track club Making of Champions owned by Bambo Akani.

The MoC boss said: “With the strong Athletics development foundation that MoC has helped to give Ashe in Nigeria, I believe we’re witnessing the birth of a global star who could become Nigeria’s most celebrated 100m Sprinter in history–perhaps Nigeria’s first-ever Olympic 100m Champion soon.”

“What’s certain is that, at the tender age of 20, he now has a glorious chance to quickly become Nigeria’s most prolific sub-10 second runner in history. Davidson Ezinwa did it four times, while Olapade Adeniken and Divine Oduduru have done it thrice each. We could very well see Favour Ashe eclipse all these records in the next couple of years, possibly even before the 2024 Olympics,” a delighted Mr. Akani added.

Another shining moment, though not very surprising, was Tobi Amusan’s record-breaking moment in the 100m hurdles event.

Amusan, who had set a new African Record of 12.41s just before coming for the three-day event in Benin, ran a time of 12.54s to not only retain her national title but also set a new Championship Record (CR).

Angela Atede held the previous Championship record of 12.63s set in 1997 in Lagos.

For the Technical Director of the AFN, Samuel Onikeku, the performances in Benin City are a pointer to better days ahead for athletics in Nigeria.

Mr Onikeku strongly believes Nigeria will be well-represented, not just at the Commonwealth Games but also at the World Championships in Oregon.

He, however, admits that to get the best results, the athletes must be fine-tuned.

“If you are observant, you will notice that our relay team has not been together for a long time. In fact, they practiced just two days before the trials. Once the Federation can finalise plans, the relay team will spend more time together to practice and run a better time. Our target is to get to the finals first and possibly shock the world by picking a medal,” he said.

He expressed optimism that Nigeria can win more medals at the forthcoming World Championship in Oregon.

“For the World Athletics Championship, the Federation believes the athletes will make the podium performance.

“Remember, Ese Brume has been performing well in all International Championships she has been participating in. I also believe that Tobi Amusan will come through because of her excellent performances in the last six months.”

“National Champion Chukwuebuka Enekwechi in the Shot Put can scale through with his current form and the present 4x100m men have a brighter prospect,” Mr Onikeku added.