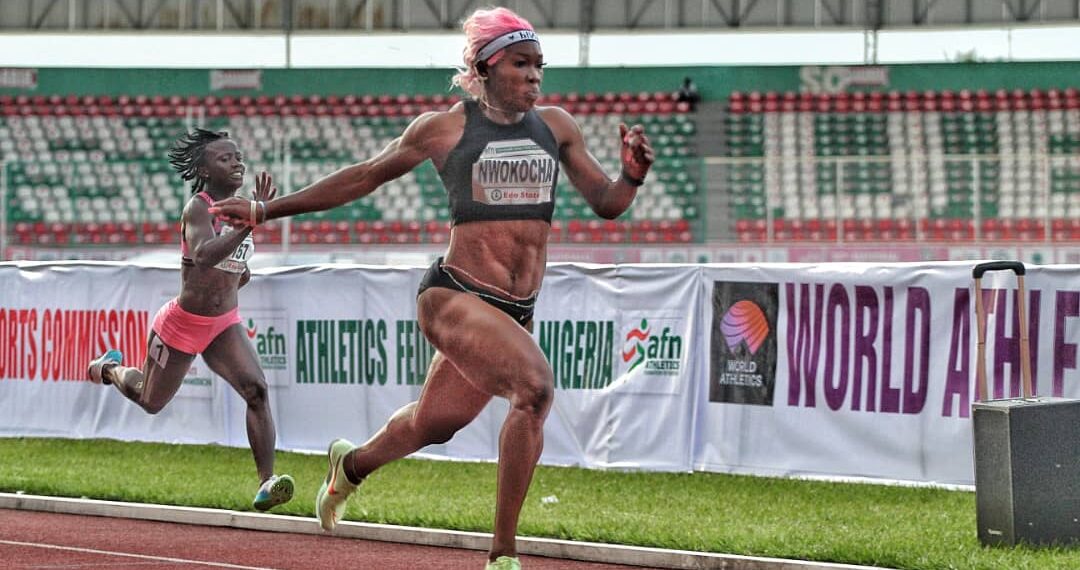 Grace Nwokocha won the Women’s race with a time of 11.03s

Amusan who had set a new African Record of 12.41s just before coming for the three-day event in Benin ran a time of 12.54s on Saturday to not only retain her national title but also set a new Championship Record (CR).

Amusan had shown a glimpse of what to expect as she dominated her heat with a time of 12.67s, before breaking Angela Atede’s former CR of 12.63s set in 1997 in Lagos.

In the final race, the 2021 Diamond Trophy winner left no one in doubt she was going for an improved record and that was what she got the 12.54 finish.

As expected, the 100m Men’s and Women’s races were explosive with Grace Nwokocha and Favour Ashe emerging as the fastest athletes.

Nwokocha won the Women’s race with a time of 11.03s while Rose Chukwuma came second with 11.07s and Chima Godbless was third with 11.38s

Speaking with PREMIUM TIMES after claiming what was her first national title, Nwokocha said she is happy with her progress and ready to work even harder.

“It wasn’t really a tough race for me, I have run 11s many times but I know I still need to work harder ahead of the important events coming up,” she said as she dedicated her first title to her coaches and fans.

In the men’s race, Ashe won with a new personal best of 9.99s as he became only the second athlete to run under 10 seconds on Nigeria soil and officially the 12th Nigerian to go under 10 seconds.

“After my semi-final race, I knew I was going to do something big in the final and I thank God how it went.

“Right now by confidence has been boosted for the Commonwealth Games and World Championships,” Ashe declared after Saturday’s historic race.

Alaba Akintola with 10.06 was second behind Ashe while Godson Brume finished in the third position.

Unfortunately, the defending 100m champion, Enoch Adegoke, who made it to the final at the Tokyo Olympics could not feature following the relapse of his injury in Friday’s heats.

Raymond Ekevwo was also conspicuously missing in the Saturday races after also suffering a knock just before Friday’s relay event.

Also on Saturday, Abejoye Oyeniyi worked extra hard as he retained his 110m Hurdles national title in a time of 13.78s.

The National Athletics Championship serves as trials for both the World Championships and Commonwealth Games. It will be rounded off on Sunday.