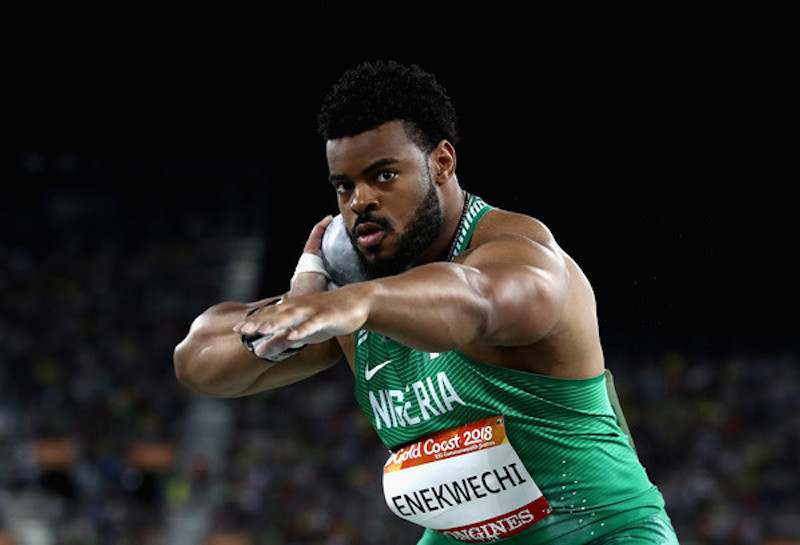 Nigeria's sports ministry has refused to take the Puma kits secured by the factional AFN board.

While the medals have started trickling in for Team Nigeria at the ongoing Tokyo Olympics, the country has sadly found itself in another embarrassing but avoidable situation.

After the embarrassment of seeing 10 of her athletes disqualified over administrative incompetence by Nigerian officials, with the athletes later carrying placards in Tokyo, one of Nigeria’s medal hopefuls, Chukwuebuka Enekwechi, who made the Shot Put final, shared a video of himself washing his competition jersey for his next outing.

According to his post, the athlete claimed he was given only one jersey for the tournament. He wrote: “When you made the Olympic Finals, but you only have one jersey.”

It is not clear why Enekwechi, a three-time national champion and two-time African champion, was given just one competition jersey or whether the sporting authorities never thought he would do well to make it to the final in his event.

PREMIUM TIMES could not get the reaction of the sports ministry and the Athletics Federation of Nigeria (AFN) at the time of this report.

Enekwechi qualified for the men’s Shot Put final after he launched his implement to a mark of 21.16m to place fourth and pick up one of the non-automatic qualifying spots to make a big push for a podium finish.

He will compete in the final on Wednesday.

This latest embarrassing situation may have been avoided if the Puma kits secured by the faction of the AFN, led by Shehu Gusau, was accepted by the Ministry of Sports.

However, the Ministry of Youth and Sports Development had refused to allow Team Nigeria to be kitted in the Puma wears, saying it was not privy to an agreement signed with the kit’s manufacturer.

The ministry in a statement insisted that before Team Nigeria’s athletes are allowed to wear any foreign brand, it must sight and be privy to any agreement signed.

The ministry alleged that Mr Gusau, and former technical director of AFN, Sunday Adeleye, refused to disclose the contractual agreement they allegedly signed on behalf of AFN for five years without recourse to the board.

However, Sunday Adeleye, former Technical Director of the AFN, insists the federation has a subsisting contract with Puma, a global name in sportswear manufacturing.

Speaking in a recent interview on Arise TV, MrAdeleye warned that the country is at the risk of litigation from the Sports kit manufacturers.

“There is another disaster waiting for Nigeria. We have a contract with Puma, which we signed in 2019 and we got kits worth $2.7 million. Puma was supposed to kit Nigerian athletes at the Tokyo Olympics but the minister is saying the athletes should not wear them because he is bringing another company to kit them.

Nigeria has one bronze and a silver medal already at the Tokyo Olympics.