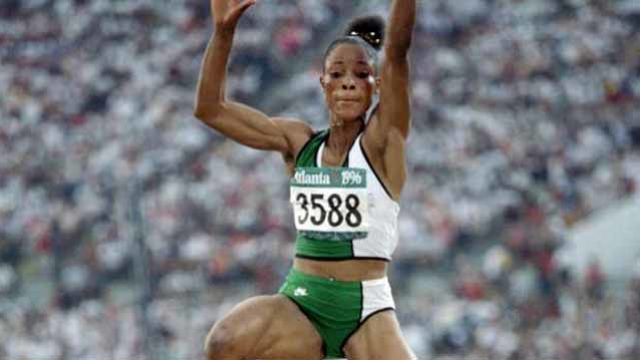 The Lagos State Governor on Thursday announced the donation of a three-bedroom house to Ajunwa.

Nigeria’s first Olympic gold medallist Chioma Ajunwa-Okpara is finally set to receive the house she was promised 25 years ago after winning the Long Jump event at the 1996 Atlanta Olympics.

The Lagos State Governor, Mr. Babajide Sanwo-Olu, on Thursday, announced the donation of a 3-bedroom flat at the Babatunde Raji Fashola Housing Estate, Iponri, to the first and only individual Olympic gold medallist in Nigeria

Mr Sanwo-Olu, while announcing the house reward at the Lagos House, Alausa, said the donation was to fulfill the 25-year pledge made by the then government which has been left unfilled.

Ms Ajunwa, who is now an Assistant Commissioner of Police (ACP) in the Nigeria Police Force, in a recent interview with PREMIUM TIMES, revealed what she is doing through her Foundation to unearth new talents that would also develop into world-beaters.

She said: …I’m doing my best to ensure we raise top athletes that can take over from the present athletes. We know the government cannot do everything, that is why ex-international athletes like myself are doing everything humanly possible to fill the void by raising quality athletes.

Until recently, Ms Ajunwa doubled as Nigeria and African record holder in the women’s Long Jump event. However, the 25-year old record was broken recently by Tokyo Olympics-bound Ese Brume who beat the 7.12m with her 7.17m leap at a meet in the United States.

LG Polls: PDP to contest in only 6 of Jigawa’s 27 LGAs – Chairman