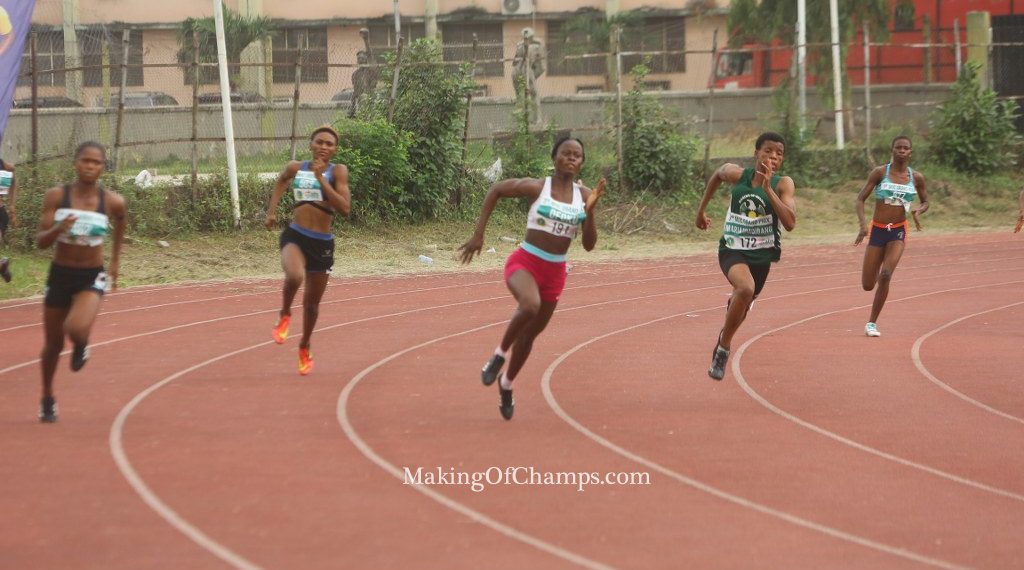 The third Making of Champions (MoC) Grand Prix came to a thrilling climax on Wednesday at the Yaba College of Technology Sports Complex, Lagos, Nigeria.

After seeing two athletes secure Olympic qualifying standards on the opening day of action, the second day of action was equally eventful as more Nigerian athletes continued to push for a ticket to the 2021 Tokyo Olympics and other international competitions lined up for the year.

Undisputedly, former Big Brother Naija housemate, Mike Edwards, was the cynosure of all eyes as he competed and won the High Jump event, having cleared a height of 2.15m.

Edward, who had a go at 2.20m but failed in his three attempts, admitted he still needs to work harder to hit the right note for the Olympic Games.

“Yes, it feels nice to be back competing with my people after almost two years… I know everyone will bring their A-game when they are competing with me which is nice but unfortunately, I could not bring my own A-game but I gave what I can today, I would have loved to jump higher… much higher, but it is still a fair start, we will work harder and see how it goes,” Edward said after his win.

David Aya, who has been the most dominant athlete in the men’s High Jump on the home front, gave an excellent account of himself as he scaled 2.10m to earn himself a new Personal Record. Godwin Charles topped 1.95m to finish in third place.

On the tracks, there were other eye-catching performances on the track where Emmanuel Ojeli won the men’s 400m final.

Though Ojeli was way short of the Tokyo Olympic qualifying time, he still came through with a new Meet Record (MR) of 46.08. Daniel Atinaya was second in 47.20 and MoC athlete Ayo Adeola clocked 47.82 for third place.

The men’s 200m final was quite thrilling also; witnessing another Meet Record. MoC’s Jerry Jakpa narrowly beat Alaba Akintola as they both crossed the line in 20.97s, thus erasing Emmanuel Arowolo’s MR of 21.03s from 2019. Ferdinand Omanyala was third with 21.04s.

In the women’s final, Tima Godbless pipped Balikis Yakubu to the line, clocking a new PB of 23.88s, with the latter 0.02s behind. Joy Udo-Gabriel placed third with 23.92s. Rejoice Sule won Final B in 25.06s.

Adebayo Faforiji won the men’s Shot Put with 12.45m while Precious Okoronkwo came out tops in the women’s Long Jump with a distance of 6.21m. Afoke Oshasha won the men’s category with a best jump of 7.40m.

PREMIUM TIMES spoke with the duo of Deji Aliu and Gloria Alozie – both Olympic medalists – and the two veterans commended the athletes for putting up a good show.

“I am impressed with the times the athletes are dropping here, I only hope they can have more opportunity to improve themselves, I hope more companies can see the bright prospect in athletics and emulate the likes of Betking,” Aliu one of the few Nigerian athletes to have run the 100m under 10s stated.

Alozie said, “I know we have talents, it is just for us to harness them properly and nurture them to fulfill their full potentials.”

Attention will now shift to the National Sports Festival next for most of the athletes as they continue their chase for tickets to the Tokyo Olympic Games that kick off on July 23.