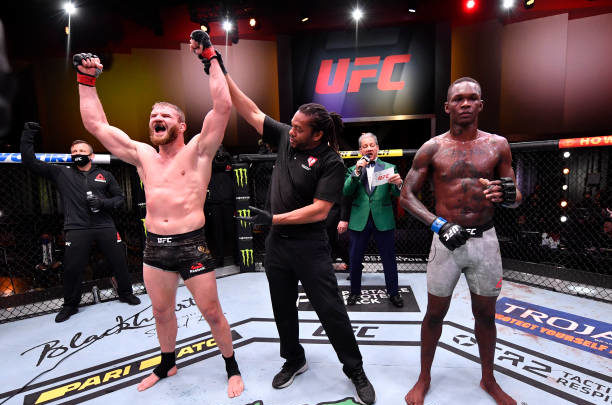 Jan Blachowicz recorded an upset over Israel Adesanya to hand him his first career loss.

The attempt by Nigeria-born Israel Adesanya to become a double champion in the UFC was dashed early Sunday morning.

Jan Blachowicz recorded an upset over Adesanya to hand him his first career loss.

The Polish fighter thus retains his title and in a stunning manner with the big upset.

Both Blachowicz and Adesanya started their fight on a cautious note.

In the opening round, meaningful strikes from both fighters were few and far between.

Blachowicz was majorly pacing looking to land a powerful punch while Adesanya was keeping him at distance by fending him off with his kicks.

Adesanya appeared more comfortable by kicking off the second round with leg strikes.

The second round saw both fighters open up a bit. The overall pace continued to be slow but Adesanya started picking at Blachowicz’s lead leg while the defending champion had some success charging forward with combinations and peppering in his jab.

The ding dong affair continued into the final round but the Pole was obviously having the edge with his weight as Adesanya largely struggled all through though with some flashes of his usual brilliance.

The win cements Blachowicz’s status as the light heavyweight champion. This is his first defence since he won the vacated title against Dominick Reyes.