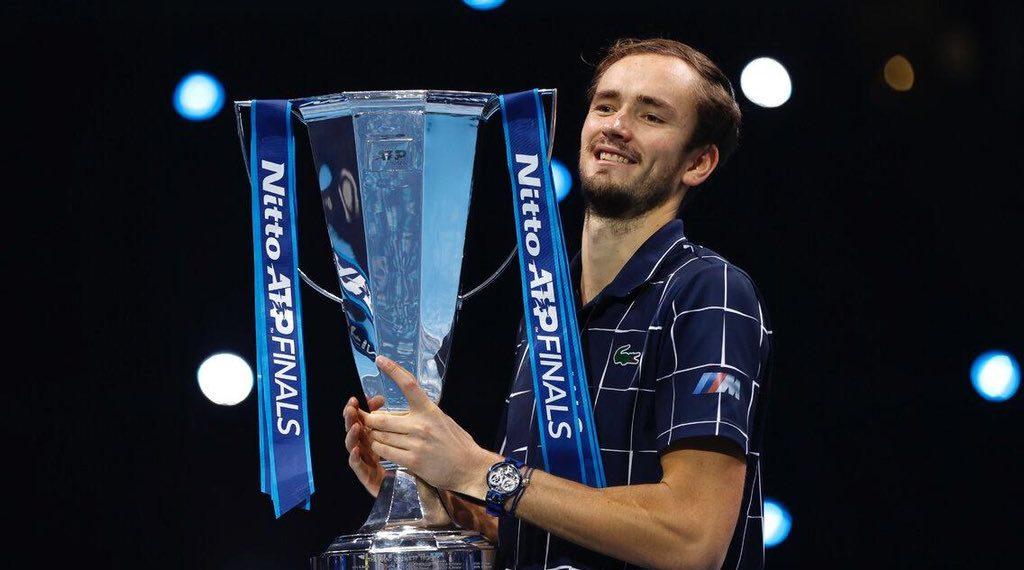 Perhaps it was meant to be that Daniil Medvedev would crown his 2020 season with the ATP Tour Finals title.

The 24-year-old Russian, seeded No.4 in the season-ending tournament, who won his first ATP title just 12 days ago, beat all the top three seeds – Dominic Thiem, in the final; Rafael Nadal in the semifinal, and Novak Djokovic, in the group stage.

After coming back from being a set down and 5-4 in the second set to Nadal on Saturday, he conjured up another comeback against Thiem, who was also chasing a first ATP Tour Finals title – winning 4-6, 7-6, 6-4. And just like the victory over Nadal, he won the second set via a tie-break.

In the tournament’s 50th anniversary and the last to be hosted in London, Medvedev reminded everyone that compatriot, Nikolay Davydenko, won the 2009 edition in London’s first hosting.

He will also be grateful to his wife, Daria, a former tennis player who never lost faith in his abilities but continuously egged him on to break into the top 10, which he has now confidently achieved.

He always tells the story that whilst he was losing a practice match to Lucas Pouille 6-0, she continued telling him he was a top 10 player and now she always tells him to remind her what she told him when he was still struggling.

Medvedev also congratulated Thiem on an amazing match. “What a match. One of my best victories, two hours, 42 minutes – three sets against an amazing player,” Medvedev said during the presentation ceremony.

“Dominic, congratulations already for what you achieved in your career. Your name is already in the history of tennis books. It is amazing. You won a Grand Slam this year. You are playing unbelievable. I hope we are going to have many more matches to come on the big occasions like this,” he added.

After winning the Paris Masters tournament just two weeks ago – his first ATP Tour title, Medvedev has followed it up quickly with his biggest title ever, the ATP Tour finals.