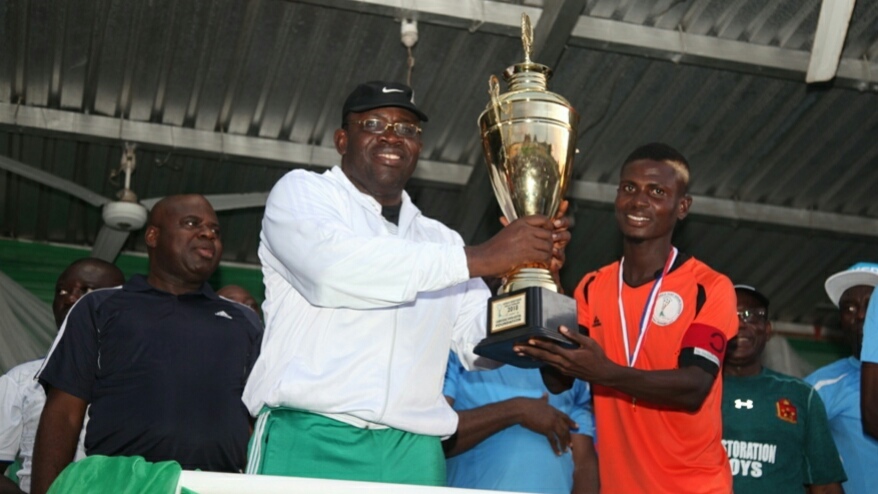 The Bayelsa State Governor, Seriake Dickson, has tasked multinational oil companies operating in the Niger Delta region on sports development at the grassroots level, as part of their social corporate responsibilities.

He gave the task on Sunday while speaking at the grand finale of the 2018 Governor Seriake Dickson Football Tournament at the Samson Siasia Sports Complex in Yenagoa.

Peretorugbene Community Football Club beat Opu-Nembe by two goals to one to emerge the winner of the trophy.

The governor in a press statement signed by his Chief Press Secretary, Francis Agbo, decried the non-committal posture of the oil companies to the challenges of oil producing communities and sponsorship of sports.

He urged oil companies to invest in sports in the Niger Delta, because according to him, “Sports play a key role in promoting peace, unity and stability for sustainable socio-economic development in any society.”

While thanking the sponsors of this year’s edition, Mr Dickson urged the oil majors and other corporate organisations to improve on their community service efforts by partnering the state government in the promotion of sports and other social activities.

He expressed satisfaction with the quality of performance and assured youth of the state of his administration’s preparedness to provide more opportunities for them to develop their innate potentialities with a view to making the state proud.

To this end, the governor directed the Sports Development Commissioner, Perekiye Buruboyefe to develop a football league and a wrestling competition, involving all the local government areas in the state, which he insisted must kick off by July this year.

While commending all the participating teams and the organisers for their show of maturity and orderliness, the governor charged youth to shun cultism and other societal vices, but channel their productive energies to useful ventures.

In his welcome address, the Commissioner for Sports Development lauded the Dickson-led administration for the steps taken to promote sporting activities, insisting that the state has not had it so good in football development.

Mr Buruboyefe, said efforts were underway to organize beach soccer and volleyball competitions, involving the various local government areas that would soon commence in the state.

According to him, the state government was preparing athletes to participate in the forthcoming competition organised by the Athletic Federation of Nigeria (AFN) in Abuja.

Also speaking, the Director General of the Restoration Cup, Onoriode Akpe, explained that the rationale behind the competition is to harness the sports potentials in the youth of the state and dissuade them from cultism, violence and other social vices.

Mr Akpe noted that, over 150 teams took part in this year’s edition of the community-based competition, in which not less than 30 talented players have already been penciled down for honing at the state owned sports Academy, Asoama in Kolokuma/Opokuma Local Government Area and Samson Siasia Academy in Abuja.

Other highlights of the event, include the presentation of award of meritorious service and tremendous contributions to sports development in Nigeria to former Super Eagles coaches, Monday Sinclair and Samson Siasia, by Governor Dickson.