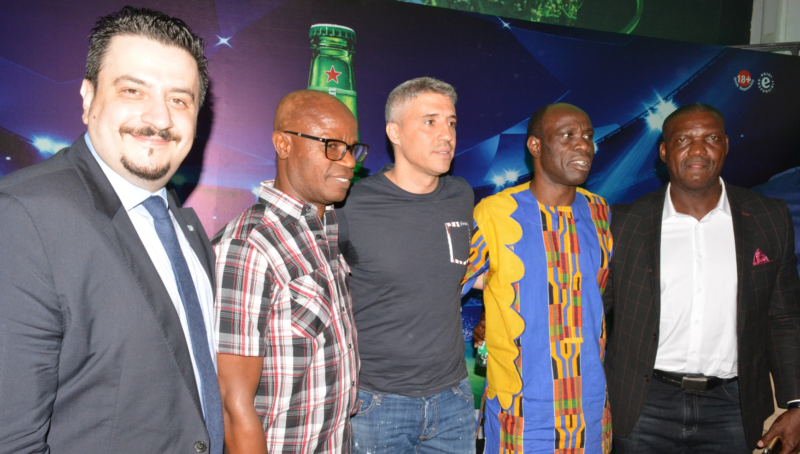 I’m happy to be in Nigeria — Ex Argentine star, Crespo

Argentina ex-international, Hernán Jorge Crespo, on Saturday in Lagos said that he was delighted to be in Nigeria for the first time as a guest of the Heineken Group.

Crespo along with Nigeria’s ex-internationals — Taribo West, Augustine Eguavon, Mutiu Adepoju and Samson Siasia — were invited by Heineken for an interactive session with journalists in Lagos.

Crespo attributed the success of his over 18 years football career to respect for others which, he said, was one of the fundamental values of life.

“As a young player, I love the game of football but one fundamental thing I learnt along the way was respect for the game, my team mates and fans of football.

“As I grew older in football, I also learnt that it was very important to respect my opponents as well; indeed, it has been a worthwhile experience for me.

“I am in Nigeria because I want to have the opportunity to meet people, to support my passion and most importantly support Heineken and their vision for the UEFA Champions League,’’ he said.

Crespo said he would never forget playing against Nigeria’s ex-internationals, especially against hard tackling Taribo West and Celestine Babayaro, who were his team mates at Inter Milan and Chelsea, respectively.

“In my career I met a lot of players I had respect for and I would never forget players like West, Babayaro, Emmanuel Amuneke, Daniel Amokachi, Sunday Oliseh and Geoge Finidi.

“However I think the greatest player so far in Nigeria was Austin Okocha,’’ he said.

Similarly, his counterparts from Nigeria, West, Siasia, Eguaveon, Adepoju, eulogized Crespo’s perfection and credibility as a great football legend and appreciated his coming to Nigeria.

With over 300 goals during his career, Crespo was regarded as one of the deadliest strikers ever in the history of European and World football.

He played for Argentinian club side River Plate and Italian sides such as Parma, Inter Milan, AC Milan, Genoa and Lazio.

He won the 2005 English Premiership League title with Chelsea FC of England, among other laurels.

While in Nigeria, Crespo is set to share the drama of Heineken-sponsored UEFA Champions League Final between Real Madrid and Liverpool with Lagos fans Saturday night. (NAN)

Children’s Day: We must ensure safety of Nigerian children – Buhari