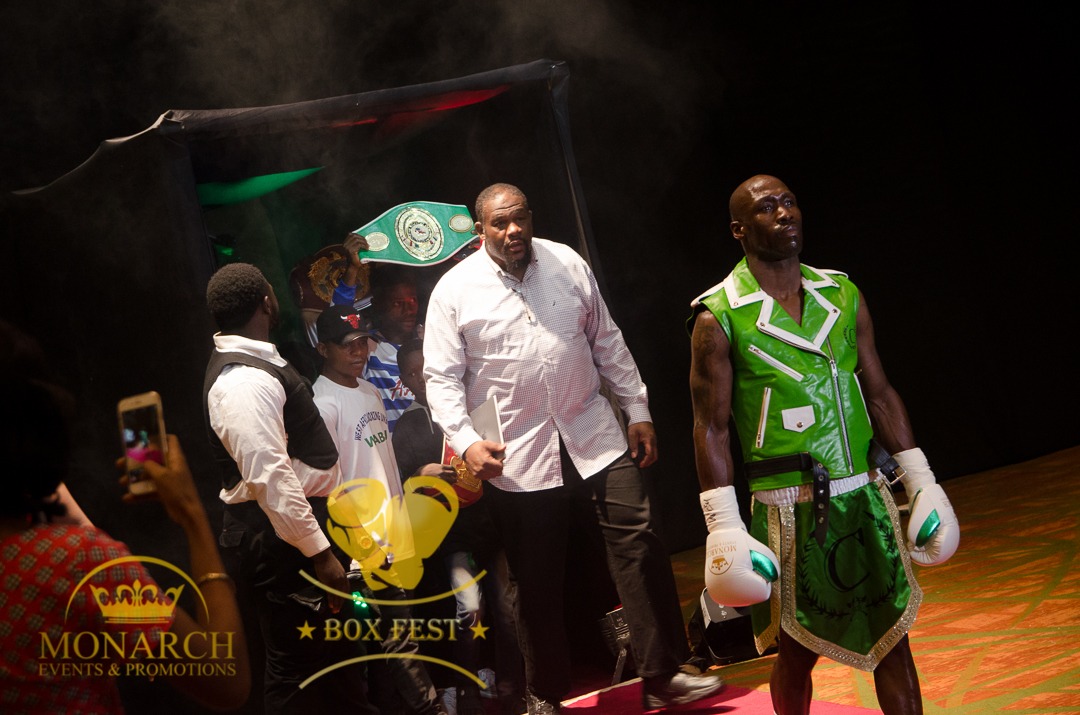 Riddick Bowe escorting out 'Chopchop' Corley to the ring

The renewed vigour to have boxing regain its frontline status as far as sports in Nigeria is concerned is already yielding a positive result.

The boxing show which was laced with musical entertainment by some A-list artistes promoted by Monarch Promotions had a card of six thrilling bouts on the night.

It got tougher in Bout 2 where Sule Olagbade of Nigeria beat Stephen Okine of Ghana by TKO in round 6 of scheduled 10 rounds to win the vacant West Africa Boxing Union (WABU) Light Middleweight title.

For the third bout, an I5nternational heavyweight challenge, it pitched England-based Nigerian, Tony Salam, against Eugen Buchmueller of Germany. It went the whole mile before Salam carried the day; winning via a unanimous decision.

The stakes were equally high in the fourth bout as Australia based King Davidson of Nigeria took on Ishmael Tetteh of Ghana for the vacant World Boxing Union (WBU) Middleweight Title.

In what turned out to be a slugfest, King Davidson (19 3 0) defeated his Ghanaian opponent via unanimous decision to win the title.

In the penultimate fight, Paul Valenzuela Jr of Mexico fought a very technical fight against a game opponent, Aaron Coley of USA, and received a Split Decision win to annex the WBU Middleweight World title.

The main event of the night was worth the wait as fans favorite, DeMarcus ‘Chop Chop’ Corley of USA, who once went the distance against Floyd Mayweather and also once beat Nigeria’s Daniel Attah won a hard fought 12 rounds unanimous decision against Patrick ‘El Elegante’ Lopez of Venezuela.

‘Chopchop’ Corley displayed the prowess and staying power that has helped him to subdue many opponents over the years to win the vacant World Boxing Union (WBU) Lightweight World Title.

“This is not going to be a one-off show, this is just like a test for us. Boxing fans should expect something bigger and better from Monarch Promotions in the coming months.”

Most Nigerian cities to experience rains on Monday – NiMet